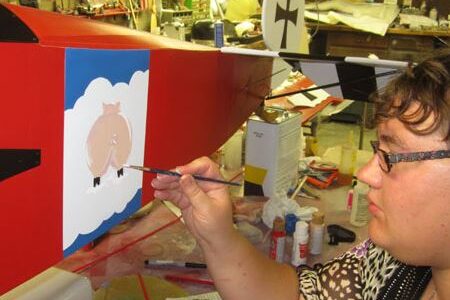 The go-to for many modelers (myself included) for making markings is either cut or printed vinyl graphics. These work great in a lot of situations but in the end they look like vinyl. Many military aircraft, especially those in-theater were a mis-matched hodge-podge of paints that were on hand, hand painted lettering vice consistent stencils, and they were never ever shiny like vinyl.

If you really want to take markings to the next level they can be hand painted just like the real thing were. If you don’t want your vinyl cutter collecting dust, Oracal makes a low-tack stencil (Oracal 813) that can be cut like vinyl then applied as a paint mask.

Take a look back at how master scale modeler Gerry Yarrish put this technique to use.

I am coming to the conclusion of my Giant Scale Fokker Triplane Build-Along and there are only a few things to left to take care of. I recently commissioned my daughter Rebecca to add the final touches on the paint job with the addition of the “Pig’s Butt” side badge, that Cole Palen’s Triplane is known for. As the whole model is spray painted and markings are masked off, it has an over all crisp look, much too new to looks like a well-worn performer in the Old Rhinebeck Aerodrome airshow. So, as with the original 1960s era version of Cole’s triplane, I asked her to hand paint the Pig’s Butt marking on for me. She used craft acrylic paints and I think she did a great job capturing the feel and look of the original markings. 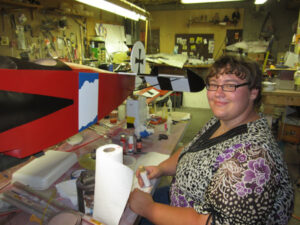 The story goes, Cole told his wife he wanted to build and fly a Fokker Triplane and she replied, “when pigs fly!” Cole painted the now famous “Pig’s Butt” in the clouds markings on the side of his triplane as a tribute to his wife’s “support”. 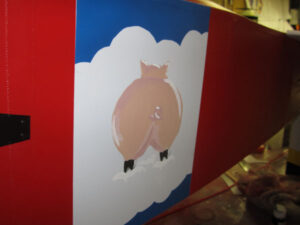 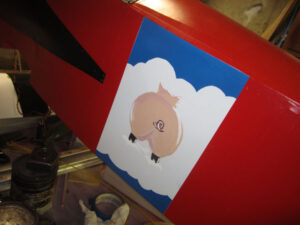