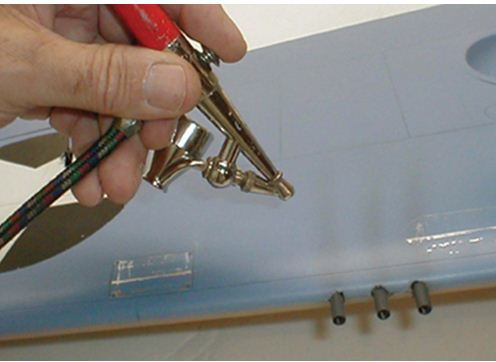 It’s early Sunday morning. You stayed up late finishing your new ARF warbird last night, and you’re raring to get to the field to collect all the Oohs, Aahs and accolades that come with the unveiling of a new model. En route, you plan your strategy: choose a spot in the pits that’s accessible to all your club mates, remove the model from the car, and place it carefully where it will become the center of attention.

This done, you ever so casually return to your car for all the support equipment: fuel, transmitter and flight tote. The crowd hasn’t started to gather yet, so you seize the moment and start to fuel your creation. Ah, now the gang starts to mosey over. As nonchalantly as possible, you complete the fueling operation and disconnect. Among the crowd is an amiable fellow known to all as “Bubba.” With a big grin that only he can conjure, he says, “Well, thank ya, friend, for gassin’ up my plane!”  With a sheepish smile, you nod, back away, and look two spots down pit row, where you see–your warbird! The crowd disbands, and everyone resumes flying. Your moment has come, gone, and forever slipped into oblivion. Sadly, the huge popularity of ARFs means that this scenario is already a reality. So, friends, I offer here a means of preventing such embarrassments: a way to express your individuality without actually having to build anything. It all involves eye candy “appearance” bling! You know; the stuff from which images are made!

I used a Binks airbrush for all the weathering and realistic accents, such as the gun-gas residue shown here. Some of the tools and materials I used are shown here. Warbird Colors water-based paints worked well. Compare the reworked Kyosho P-40 (above, personalized with my initials) to the stock model at left. This was a great way to practice scale-finishing techniques.

I started this exercise with an idea, an ARF model and a small investment in time and materials. Since scale is really the focus of most of my RC activity, I thought it would be great to take an off-the-shelf ARF, gather some basic documentation (which becomes the bible in Scale competition), and choose some easy-to-use materials to create a unique and personal look for an otherwise stock, film-covered model.

The model I chose was the new Kyosho P-40 Warhawk, a .40-powered warbird that’s fairly typical of today’s contemporary ARFs. Although this is not a product review of the model, I will say it is among the nicest, most complete offerings I’ve seen. And with an O.S. .48 Surpass 4-stroke for power, it is a very scale-like flyer.

I assembled the model according to the instructions, including the radio, engine and tank installations. I then went over all the film-covered surfaces with a Scotch-Brite pad to remove the shine from the film and impart an overall “satiny” look. Resist the temptation to use a fine (600-grit) sandpaper because if you break the surface of the covering, you’ll end up with a bunch more work to eliminate the plastic “frizzies” you’ve created! You need only remove the shine. When this was done, I fit a small piece of scuffed chrome MonoKote to the inset fuselage panels aft of the canopy glass. I used a dressmaker’s pattern-transfer tool to simulate the rivet lines in these panels; this creates a convincing illusion. Cockpit work was next, with the addition of paint, a pilot figure and an instrument panel.

Before I installed the canopy, I trimmed it to fit and masked off all the clear panels. I then used Formula 560 canopy glue to attach the canopy to the fuse-lage. Small pieces of masking tape work well to hold the canopy in position while the adhesive cures. All remaining masking was accomplished with tape, paper, or self-adhesive shelf-lining material and included the stock national insignias, engine, wheel, tires and gear struts. I then performed a final wipedown with alcohol to remove any unwanted residue. I protected the clear portions of the canopy with masking tape before I applied primer and color. Be sure to use a sharp no. 11 hobby blade to cut the tape along the frame line and avoid unsightly “frizzies”! I installed chrome MonoKote “access” panels before I applied the color. Using “chrome” permits you to simulate areas of chipped and worn aluminum.

The colors I chose for my P-40 were based on the documentation I had on hand. It defined the colors used on some “desert-scheme” Warhawks. Upper surfaces were sand colored, with the under surfaces azure blue. Depending on your scale “seriousness” quotient, you can approximate these colors yourself by eye, take your FS color chips to the local paint shop for matching or, as I did, buy premixed, prematched authentic colors from Warbird Colors (warbirdcolors.com). These paints match the chips, are available in user-friendly quantities and are reasonably priced, and they work! I’ve long been a basecoat/clearcoat advocate, using automotive-type paints on my scale models. I’ve grown comfortable with the application process and get fairly decent results, but I cringe a bit when it comes to buying small quantities; these paints can be pricey, especially since they must be custom mixed. The paints I used on the P-40 addressed all those issues but raised another: they were water-based pigments. Now, I don’t know whether latex and acrylic paints are the same, but to me, latex paint is best used on houses–not on scale models. I know that there are guys who get good results, but I’m surely not one of them. Perhaps the formulation of the Warbird Colors paints is different; I know that there is a �cross-linker� additive employed at the rate of eight drops per ounce of pigment. Whatever the reason, they worked very well for me. The success, however, was not without a false start or two. The recommended solvent (or thinner) for these paints is water; good old, inert, inoffensive, non-buzz-producing H2O. It is used in both the primer and pigmented paints. After adding some scuffed �chrome� MonoKote access panels, I applied the primer, thinned to the recommended ratio, with a high-volume, low-pressure (HVLP) spray gun. The result was a layer of light gray beaded droplets all over my model. So far, not so good! They didn’t seem as though they were ever going to evaporate, but I resisted the temptation to wipe them all off and instead opted to let the paint dry overnight. Figuring that evaporation time was the culprit, the next day I made up a new batch of primer, but this time, I used denatured alcohol as a solvent. Applied in the same manner, the new coat was dry to the touch in 15 minutes and the model was ready for color. I stayed with alcohol as the thinner and applied the upper surface sand color first, waited half an hour and applied the azure blue to the bottom sides. A little edge cleanup with my Binks airbrush, and we were looking good. I used the airbrush again to simulate an exhaust pattern; a grayish color works best here. Note that the number-one exhaust stack has no stains or exhaust deposits. Here is the horizontal stabilizer after I had lightly scuffed it with a ScotchBrite pad to provide better surface adhesion for the paint. Note that the elevator had not yet been scuffed. I left the original national insignias in place, scuffed them with a ScotchBrite pad and masked them before I applied primer. The cockpit after I installed the instrument panel, the glareshield, the pilot figure and the headrest. Note the scuffed and �riveted� metal panel behind the pilot bust.

I drew panel lines directly on the painted surface with a soft pencil. A straightedge, T-square and drafting templates are very helpful tools for accomplishing this step. I then highlighted the over-painted “panel” edges with the same sharp pencil and used my finger to smudge some of the deposited graphite from the pencil. I used a no. 11 blade to “chip” the paint off some of the edges of the panels, allowing the scuffed MonoKote to show through as wear and tear. A little more “dirt” randomly applied imparted a subtle but realistic weathered look to the model.

A little more airbrush work in the form of gun-gas and exhaust stains had my P-40 looking the way I wanted it to and ready for a clear, sealing coat. I dusted on two light coats of flat, clear polyurethane straight from the spray can, let everything dry for a couple of days, and that was it.

Now stand back, look at what you’ve accomplished and head for the field again. Just remember two final points: