The De Havilland Comet is one of my personal favorites.
The original Comet was designed and built back in 1934 for the race from England to Australia. Only three original  aircraft were ever constructed .  The plane to the left was known as Black Magic. The second plane, a red version was  named Grosvenor House. The third Comet was finished in a dark green color. No name that I could find was given. It was simply known as the Green One. A lot of information about this plane can be found on-line.
One thing in particular about the history of this aircraft stands out. Although all three aircraft started the race only two ever finished. The DH 88 Comet known as  Black Magic was unable to complete the race. The story goes that the wrong fuel was used at one of the fuel stops during the race and caused serious engine damage. Of the two plane that did finish the race. They placed First and second Beating the closest  competition by more than 14 hours. However the officials would only award a first place and a fourth place finish since the two planes were virtually identical and they felt it wouldn’t be in keeping with the spirit of the race to have first place and second place awarded to the same air plane design. Politics don’t you know.
The De Havilland DH 88 Comet is a very rarely modeled aircraft and only a few Companies have produced an ARF version. At the time I built this plane none of the AFR’s available were the scale (size) I was looking for. After months of searching I happen upon Ivan Pettigrew’s web site. Ivan designs many unique and seldom seen a airplanes and I would encourage any one to visit his site if you want to see some cool airplanes. The following is the link to Ivan’s site:  ivansplans.com/

You may feel the need to make some minor alterations and up dates based on new materials available today. Many of Ivan’s plans are hand drawn and rendered years ago. A lot has changed in just the last few years. Electronics, motors and landing gear options to name a few. I’ll provide a blow by blow of the modifications as we progress. 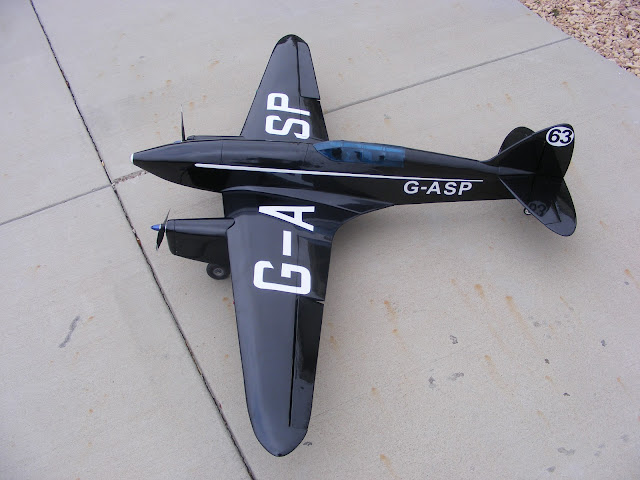 As with all my planes this model is configured for electric power. All the set up info is a s follows:

I used 2 E-flite 36 bl out runner motors. These will  provide excellent power. Each motor is rated at 700 watts power with the use of 4 cell Li-Po batteries. The motor has a continuous draw of 42 amps with a burst of 60 amp. It’s important to decide early on in the build if you will use one battery for both motors. Or one battery for each motor. There are advantages to both.

With a single battery you need to parallel the 2 ESC’s together. Also it is necessary to disconnect the red wire on both ESC’s when using a separate flight pack (battery) for the receiver and servo(s). I don’t recommend using built-in BEC’s that come with the speed controllers. A single battery may also require that the battery have larger storage or mah rating. A higher C rating (discharge rating) is needed to provide adequate amperage to both motors. To verify that your single battery can provide ample power use the following calculations. You must know the maximum amp draw of the motors used. In this case the E-flight 32 bl motor has a maximum amp draw at burst of 60 amps. Multiply this by 2 since this is a twin. The total amperage needed will be 120 amps at maximum draw. This means that your battery should deliver a minimum of 120 amp. I say minimum, but really you want a margin of at least 20% so you don’t over work your battery. This  means available amperage should be 140-150 amps.

To figure out how many amps your battery can deliver is also very easy. Multiply the storage or mah of the battery by the C rating (discharge rating) of the battery. This amount is the amperage available. Example: A 4S 5,000 mah Li-Po battery with a C rating of 30 would have 150 amps power. 5,000 X 30 = 150,000.00. A just the decimal point. This battery would provide 150  amps.

Lets look at some of the advantages of this configuration.

First and foremost is simplicity. You only need to build a single  battery compartment. Only one battery access  point is required. Weight can be centered within the fuselage to produce latitudinal and longitudinal stability.  The battery location in the fuselage will simplify obtaining proper C of G. Reducing the potential of having to add weight during balancing. Lastly: The total weight of the air plane is usually lighter with a single battery lowering the potential wing loading of the model. Typically a single battery pack will weigh less than 2 packs with the same ratings.

Now for the disadvantages. There really is only one. disadvantage I’ve found. Flight time. With a single battery you may need to keep your flight times between 5-7 minuets. If you want longer fight times. Install a battery with a higher mah rating. The great thing is the costs of batteries has come down quite a bit and battery performance has improver greatly in recent years. The Cost of a single battery that meets the requirements of this airplane are now available through countless manufactures at costs ranging from $70.00 to $90.00 If you require a brand name battery the cost can go as high as $250.00 or more.  The choice is really up to you. I have never found the need to spend large amounts to get decent performance. Check out Hobby King for some awesome battery prices. Remember one thing. A single battery system requires the battery to have a higher mah rating and a higher C Rating. Both need to be  sufficient for the particular models requirements.

A two battery system for a twin may sound more appealing but does have distinct disadvantages. If one battery fails the plane may; and probably will experience adverse yaw or a wing over death spiral when one of the two motors stops. If enough rudder can be applied quickly a catastrophic result may be avoided. Maybe! Since each battery only provides power to one motor the size of the battery can be much smaller and less costly per battery. However since you need two batteries the cost of both combined may be the same or greater than a comparable single battery. You also have the added benefit of charging 2 batteries rather than just one. Then we come to making access available for both batteries. Yes you can locate both batteries inside the fuselage. I strongly encourage this. The alternative is to locate the batteries in each nacelle. Manufactures of ESC’s tell us that the  battery should be located as close to the ESC as possible. While this May be true I have yet to have any problem with batteries placed as far as several feet from the ESC. Placing the batteries out in the wing can produce adverse yaw and pitch issues. Not to mention all that weight father from the center line of the aircraft. Think of it this way. The farther out from the center the weight is positioned the greater effect it will have during a turn or a snap roll. This can severely reduce the planes ability to right it’s self after a particular maneuver. The battery weight is thrown outward during maneuvers causing slow or unpredictable flight response. Then there is the balancing issues associated. Weight may need to be added out board to obtain lateral balance. Not all batteries weigh the same. Even if they are the same size and from the same manufacturer variations can occur. 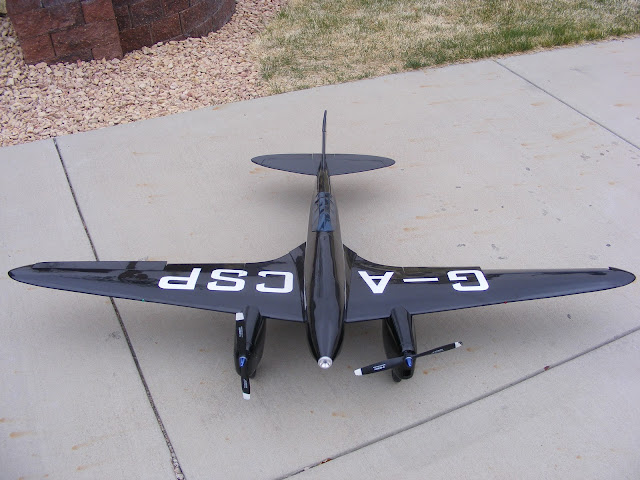 The ESC’s selected are made by Castle Creations. I chose two 60 amp Phoenix ESC’s. They are the recommended size for the E-flite 32 bl out runner motors. Two ESC’s are required!  One for each motor. Castle Creations does not recommend using one larger ESC for twin applications. The ESC’s are located inside the nacelles. The nacelles are designed to be removed from the wing  for access to the landing gear, ESC’s and servo(s). I used a single battery system for this airplane located inside the fuse so no access hatches are incorporated within the nacelles. This had the added bonus of additional room for the retractable main landing gear and  landing gear servo(s).

All the servo(s) used are JR ST 47 BB standard. With the exception of the landing gear servo(s). They are a JR Landing gear servo specifically designed to handle the additional stress loads and servo deflection requirements.

A Spectrum AR6000 receiver system is installed. While this is generally used on park flyers I have had little issue installing them in much larger aircraft. The have proven to be very reliable and cost affective.

Next time we’ll get to building