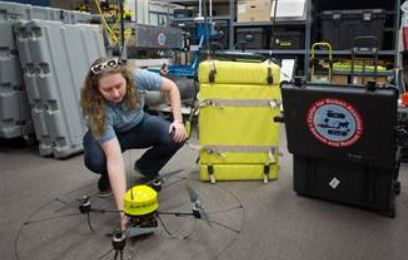 Randal Franzen was 53, unemployed and nearly broke when his brother, a tool designer at Boeing, mentioned that pilots for remotely piloted aircraft – more commonly known as drones – were in high demand.  Franzen, a former professional skier and trucking company owner who had flown planes as a hobby, started calling manufacturers and found three schools that offer bachelor’s degrees for would-be feet-on-the-ground fliers: Kansas State University, the University of North Dakota and the private Embry-Riddle Aeronautical University in Daytona Beach, Fla. He landed at Kansas State, where he maintained a 4.0 grade point average for four years and accumulated $60,000 in student loan debtbefore graduating in 2011. It was a gamble, but one that paid off with an offer “well into the six figures” as a flight operator for a military contractor in Afghanistan.

Franzen, who dreams of one day piloting drones over forest fires in the U.S., believes he is at the forefront of a watershed moment in aviation, one in which manned flight takes a jumpseat to the remote-controlled variety.

Randal Franzen went from being unemployed to earning a six-figure salary as a drone flight operator in Afghanistan. Courtesy Randal Franzen

While most jobs flying drones currently are military-related, universities and colleges expect that to change by 2015, when the Federal Aviation Administration is due to release regulations for unmanned aircraft in domestic airspace. Once those regulations are in place, the FAA predicts that 10,000 commercial drones will be operating in the U.S. within five years. Although just three schools currently offer degrees in piloting unmanned aircraft, many others – including community colleges – offer training for remote pilots. And those numbers figure are set to increase, with some aviation industry analysts predicting drones will eventually come to dominate the U.S. skies in terms of jobs.
At the moment, 358 public institutions – including 14 universities and colleges – have permits from the FAA to fly unmanned aircraft. Those permits became public last summer after the Electronic Frontier Foundation filed a request under the Freedom of Information Act. The government issues the permits mainly for research and border security. Police departments that have requested them to survey dense, high crime areas have been rejected. Some of the schools that have permits have been flying unmanned aircrafts for decades; others, like Sinclair Community College in Dayton, Ohio, received theirs recently to start programs to train future drone pilots.
Alex Mirot, an assistant professor at Embry-Riddle who oversees the Unmanned Aircraft Systems Science program there, said this generation of students will pioneer how unmanned aircraft are used domestically, as the use of drones shifts from almost purely military to other applications. “We make it clear from the beginning that we are civilian-focused,” said Mirot, a former Air Force pilot who remotely piloted Predator and Reaper drones used to target suspected terrorists in Afghanistan, Pakistan and elsewhere for four years from a base in Nevada. “We want them to think about how to apply this military hardware to civilian applications.”
Among the possible applications: Monitoring livestock and oil pipelines, spotting animal poachers, tracking down criminals fleeing crime scenes and delivering packages for UPS and FedEx.
With U.S. military involvement in Afghanistan winding down, drone manufacturers also are eager to find new markets. AeroVironment, a California company that specializes in small, unmanned aircrafts for the military, recently unveiled the Qube, a drone designed for law enforcement surveillance.
The FAA hasn’t allowed police agencies to fly drones over populated areas – because of concerns about airspace safety, as drones have crashed or collided with one another abroad. But that hasn’t stopped some agencies from buying them in anticipation of their eventual approval. The Seattle Police Department, for example, has two small aircraft, which two officers occasionally fly around a warehouse for practice. For now, a police spokesman said, federal rules are too restrictive to use them outside.The domestic market is so nascent that there isn’t even agreement on what to call unmanned aircraft – “remotely piloted aircraft,” “unmanned aerial vehicles” – UAVs – or by the most mainstream term, “drones.” The latter makes many advocates bristle; they say the term confuses their aircraft with the dummy planes used for target practice – or with the controversial planes used to kill suspected terrorists abroad.

Industry attracting engineers and pilots
Students at Embry-Riddle train on flight simulators that closely resemble the Predator, an armed military drone with a 48-foot wingspan, because the FAA will not issue a drone license to a private institution. Without guidance from the FAA, Embry-Riddle has struggled with how to create a robust program that will turn out employable graduates. “As of now there aren’t rules on what an (unmanned aircraft) pilot qualification will be,” Mirot said. “You have to go to employer X and ask them, ‘What are you requiring?’ And that becomes the standard.” The bachelor’s degree program also includes 13 credits in engineering, so students understand the plane’s whole system, Mirot said.
Embry-Riddle recently graduated its first student with a bachelor’s degree, but those who graduated earlier with minors in unmanned aircraft systems have fared well, Mirot said. “I had a kid who deployed right away and he was making $140,000,” Mirot said. “That’s more than I ever made. Yeah, he’s going into Afghanistan, but he had no previous military experience or security clearance.” Mirot said many of his students aspire to be airline pilots. But with salaries for commercial airline pilots starting as low as $17,000 in the first year, they plan to start in unmanned systems to pay off their loans, then maybe apply for an airline job, he said. The University of North Dakota, which launched its unmanned aircraft systems operations major in 2009, has similar success stories. Professor Alan Palmer, a retired brigadier general of the North Dakota National Guard, said 15 of the program’s 23 graduates now work for General Automics in San Diego, which makes the Predator and Reaper drones used in Pakistan and Afghanistan.
Engineering and computer science students, too, are in demand by the drone industry. At least 50 universities in the U.S. have centers, academic programs or clubs for drone engineering or flying. Many of the engineering students work on projects making the drones “smarter” – that is building more sensitive sensors – and studying how the robots interact with humans.
George Huang, a professor at Wright State University in Dayton, Ohio, who builds drones the size of hummingbirds, said nearly all his 20 students work as researchers for the Air Force. This means they’re earning between $60,000 and $80,000 a year while still enrolled, instead of the $15,000 stipend that graduate students typically receive from their schools.
At the University of Colorado in Boulder, doctoral candidate Sibylle Walter said unmanned systems appeal to her because the results are immediate. In the past, she said, aerospace students typically ended up at Boeing or another big company and spent years working on one element of a project. Instead, she is working with her adviser to build a supersonic drone capable of flying up to 1,000 mph.
“The link between education and application is much more compact,” Walter said of the unmanned aircraft. “That translates to this new boom. You can build them inexpensively – you don’t need $100 million to build one.”

Ethical warfare?
Despite the promise of numerous civilian applications, drones continue to be controversial because of their role as weapons of war. At Texas A&M University, which has an FAA permit to fly drones, computer science student Brittany Duncan is unusual among her peers: She’s a licensed pilot, a computer scientist and a woman. She probably could land a high-paying job for a military contractor, but she’s intent on staying in academia, studying robot-human relations, specifically how robots should approach victims of a natural disaster without scaring them.
On a recent hot, dusty morning, Duncan, 25, pulled a small aircraft from the back of a 4×4 pickup. Wearing black work boots and Dickies, she quickly assembled a remote-controlled aircraft that resembled a flying spider, then launched the aircraft – equipped with sensors and a video camera – over a pile of rubble to practice capturing footage.  At her side was Professor Robin Murphy, her adviser and a veteran of real-world unmanned aircraft operations, having flown over the World Trade Center after 9/11, the Gulf Coast in the aftermath of Hurricane Katrina in 2005 and the nuclear reactor in Fukushima, Japan, after the 2011 tsunami and nuclear disaster there (although she stayed in Tokyo). She believes drones could revolutionize public safety.
“I could show you a photo of firefighters from today, and it could be a photo of firefighters from 1944,” Murphy said. “They haven’t had a lot of boost in technology. [Unmanned aircraft] could be a real game-changer.”

Duncan knows there is resistance from communities where drones have been introduced. In Seattle, for example, the ACLU argued that drones could invade privacy. But as Duncan sees it, this makes her work even more relevant. “That’s the most important thing to me – that people understand good can come from drones,” Duncan said. “Every technology is scary at first. Cars, when they went only 6 mph, people thought there would be a rash of people getting run over. Well, no, it’s going slow enough for you to get out of the way. And it’ll change your life.” Duncan said she considers the implications of working on machines that are for now mostly used for war. Despite conflicting reports on civilian casualties in drone strikes, she’s convinced that unmanned aircraft offer a more-ethical battlefield alternative because they take the pilot’s “skin” out of the game.

Disaster City, a giant search-and-rescue training ground in College Station, Texas, is home to a destroyed strip mall, a mock-up movie theater and towering buildings all made to be torched in the name of emergency preparedness. Clint Arnett describes how Disaster City works. “If you’re flying a UH-60 Blackhawk Helicopter and look down and think someone has a surface-to-air missile, you’re going to shoot first and figure it out later because you’re a pilot and your life is in danger,” she said. But with drones, “(You) can afford to make sure that someone is a combatant before they engage – because you don’t have your life on the line. It takes your emotion out of the equation.”

While that debate continues, the Department of Defense is showing no loss of appetite for drones, despite the drawndown in Afghanistan. This year, it plans to spend $4.2 billion on various versions of the unmanned aircraft, 15 times more than it did in 2000. For Professors Mirot and Palmer, that is evidence that their programs will stay relevant, no matter how the domestic deployment of drones plays out.

Looking ahead
There is an ironic twist to Randal Franzen’s move to climb aboard the cutting edge of aviation: When he went to Afghanistan, he learned that his assignment was to monitor surveillance video from a tethered balloon near the Afghanistan-Pakistan border – a military technology that – minus the cameras – dates to the Civil War. From the base miles away, hemonitored the rural area for Taliban activity, but mostly watched Afghans going about their daily lives. The retrained drone pilot said he found it fascinating. “I grew up in Montana, swam in irrigation ditches, and they do the exact same thing – they’re just trying to make a living, raise some cattle and kids and do the exact same thing as everyone else,” Franzen said. There were moments that caught him by surprise – such as when he saw a man leading 10 camels through the desert while talking on a cellphone, walking several feet ahead of his wife, who was dressed in a full burqa.
Now home in Colorado, Franzen figures he’ll take at least one more far-flung military assignment as he waits for the domestic drone market to open. This time, though, he’d like to put his newfound remote flying skills to better use.“I had three offers yesterday to go back and do the same thing for three different companies,” he said. “I talked to them about flying. I’d rather pilot something. I’d like to go play with something cooler.”