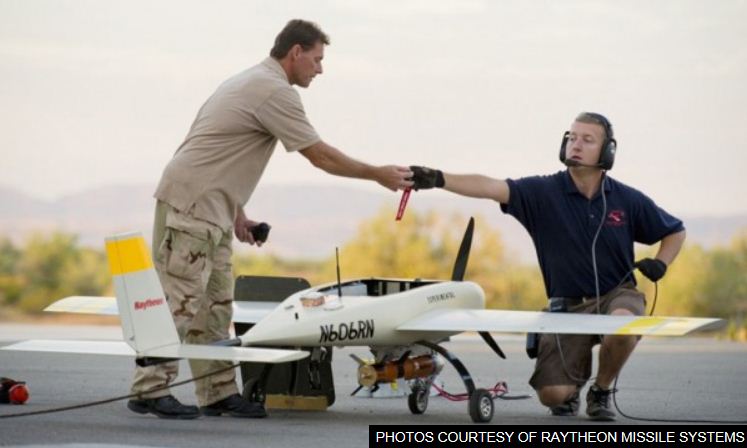 Did you ever imagine that the DA engine that you use on your latest project is also being used by military drones? Check out this story from David Whichner for the Arizona Daily Star. The story doesn’t mention the power system, but our friends at Desert Aircraft have confirmed that the Pyros uses a DA powerplant.

Tucson-based Raytheon Missile Systems says it has completed a successful warhead and guidance-system test of a small smart bomb designed for use by unmanned aircraft. The end-to-end flight test of Raytheon’s 2-foot-long Pyros – also known as the Small Tactical Munition – was announced Tuesday in a news release coinciding with the Association for Unmanned Vehicle Systems International trade show in Las Vegas.

Raytheon is developing the Pyros with its own funding, in hopes of winning a military contract. The recent test validated the weapon’s semiactive laser and GPS satellite guidance modes, as well as its detonation height sensor, electronic safety and arming device, and multieffects warhead, Raytheon said.

During a test at the Yuma Proving Ground, a Pyros was dropped from a Raytheon Cobra unmanned aircraft and directed to a target simulating insurgents planting an improvised bomb. While directly over the target, the Pyros’ warhead detonated at a predetermined height, Raytheon said. The systems functioned flawlessly, and the next steps are to complete ongoing integration work on fielded platforms and prepare for production, Tom Bussing, vice president of advanced missile systems for Raytheon Missile Systems, said in prepared remarks.

While the U.S. military’s larger unmanned aircraft, such as the MQ-9 Reaper, already are fitted with munitions, the Pyros is designed for use by smaller drones now used for reconnaissance, such as the RQ-7 Shadow used by the Army and the Marine Corps. At 13 1/2 pounds and 22 inches long, Pyros is the smallest air-launched weapon Raytheon offers and is small enough to be deployed from the U.S. military’s common launch tube.

The Marines reportedly are testing another classified munition on the Shadow.