During winter, most of the planes we fly are tail draggers and just have skis on the front.  Small skis for the tail of the plane are unavailable. If the snow is soft or crusty, this more or less works: the wheel drags through the soft snow or stays up on top if the snow is crusty. You do run into a problem once in a while where the tail wheel and wire catch in a soft part of the snow or footprint on the runway (left by someone retrieving a plane or coyote).  If you’re lucky the snow gives, but after watching the rudder and wheel suddenly depart from the tail of my friend’s E-flite Carbon Cub giant scale foamy during a landing, I decided it was time to make a ski that would just replace the tail wheel on any airplane. 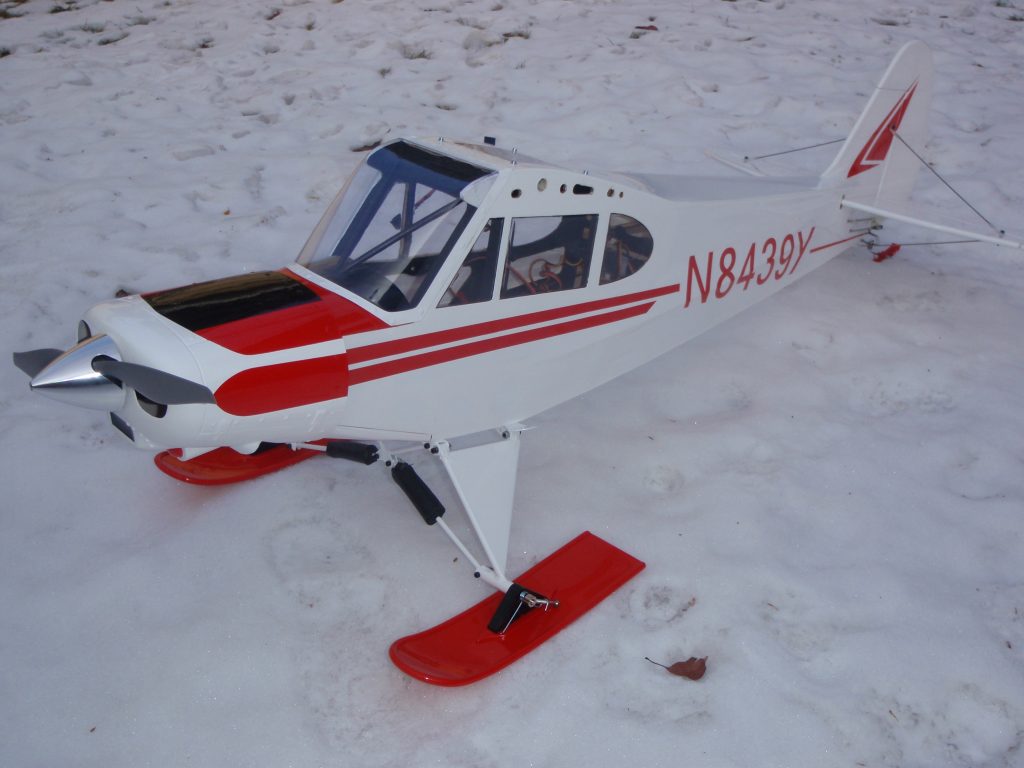 My winter airplane is the E-flite Super Cub 25e. This has version 1 ski design. It is a profile of the ski curved shape with two side pieces, made out of 1/8” plywood, to form a keel for the ski.  Add some scrap canopy plastic bent to the curve, plywood, CA, trim to shape and you have a ski.  Canopy plastic was used for the ski, trying to keep it light and not affect the CG. 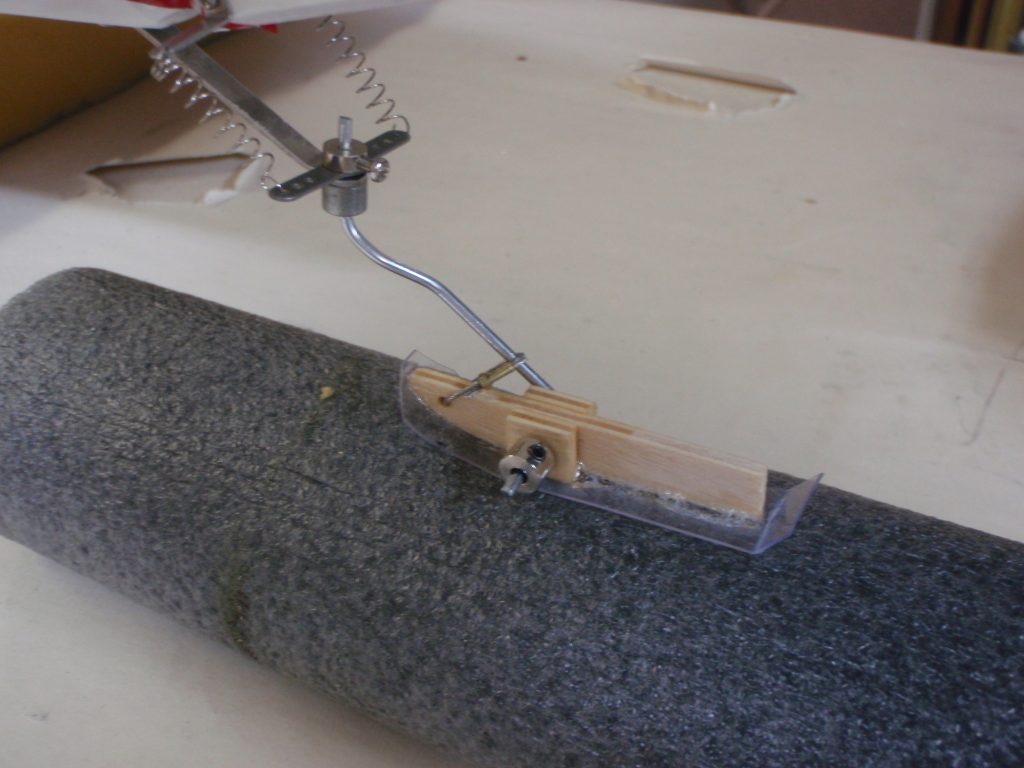 This the key photo for success. The front skis have axle attachments, mid ski, which is strong enough to keep the skis from pitching up (causes trim changes to flight controls) or downward (which results in some colorful landings). The rear tailwheel wires are generally pretty thin so the rear ski has to be axle forward.  You can see above the axle location is forward (1/3 the length back from the front of ski). Gravity wants to make the rear drop, keeping the tip up for landings.  A fail safe is also required in case of rough snow crust. This makes it impossible for the ski to pitch downward and get caught in the snow. Just drill a hole anywhere at the front of the ski and put the plane in takeoff/landing position on a table.  Loop some wire through the hole and through some scrap copper tubing (similar to pull-pull aileron connections). Snug the wire up on the tail wheel leg, crimp and trim. Paint if you want. 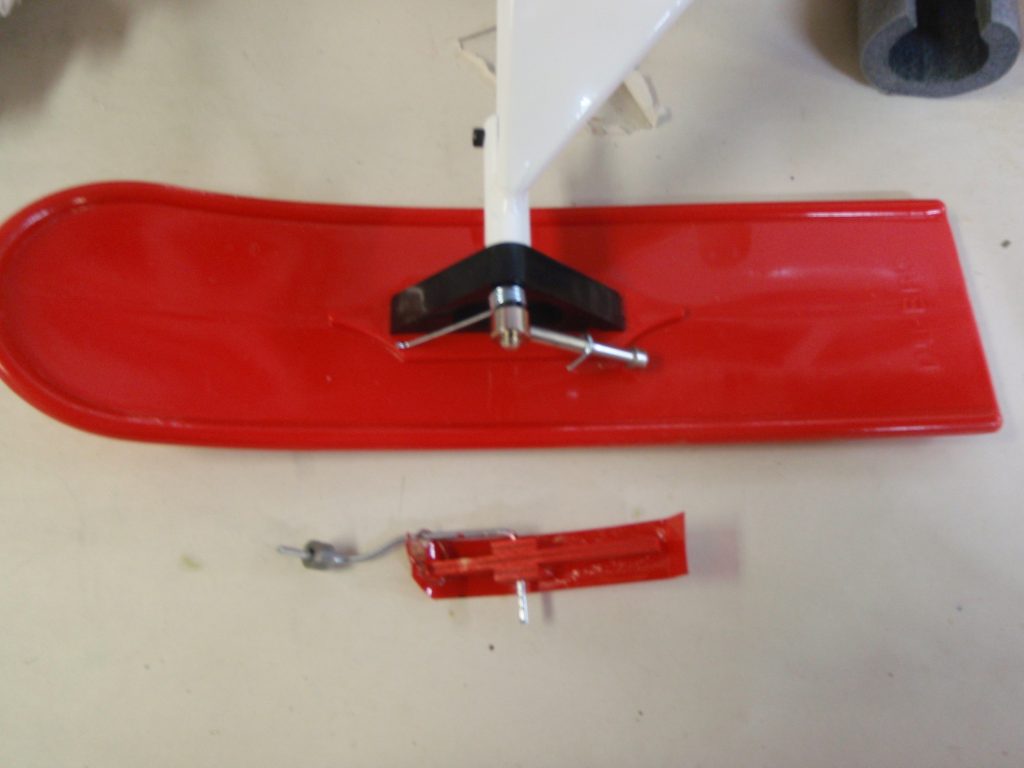 Above shows the ski painted to match the Cub colors and size of the ski relative to the Du-Bro Snowbird Snow Skis (Part 825 R). 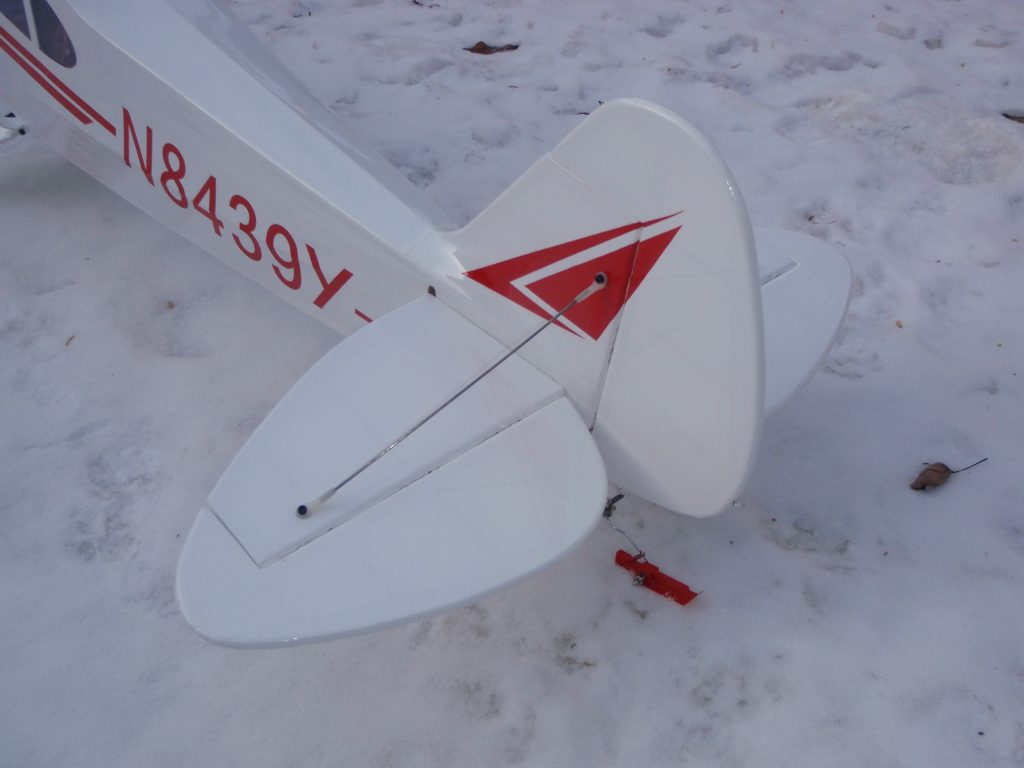 This photo shows the ski mounted to the airplane and looks great.  You can also see the snow is not always a smooth surface. Take the plane out next weekend with a new tail ski and brag to your friends about how the rudder on your airplane is not going to come off like it does on some airplanes?  Well, after a few flights on crusty snow, the plastic had broken from the cold and the tail of the plane was sinking into the snow.  I did get razzed a bit about, where was my new ski? Hence version 2. 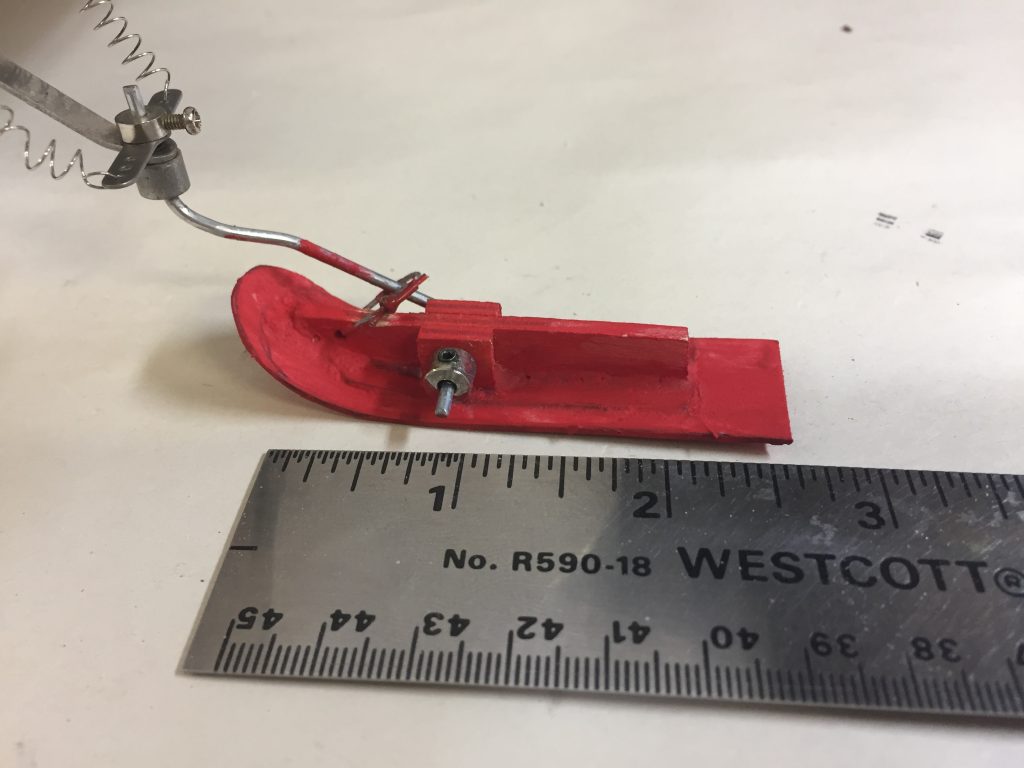 The version 2 ski is shown above with a ruler for scale. Same ski design as version 1, but with 3/32’ plywood formed to shape and glued onto a similar frame and painted.  The plywood was cut to the top view profile and size I wanted and the front half, soaked overnight. While it was soaking I took a scrap of 2×2 and cut the ski side view profile in it with my scroll saw.  The ski was placed in the form and clamped until dry (overnight) 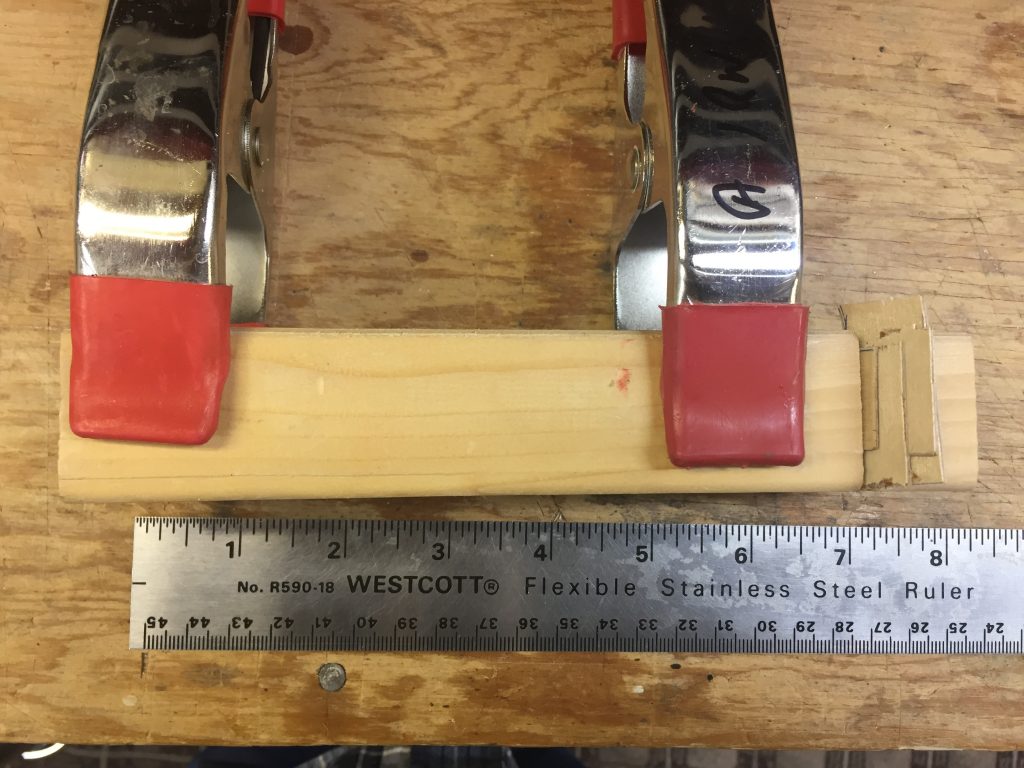 On the first attempt with the form the plywood cracked so I modified the front ski angle.  There are a couple of thin wedges at top of photo to help hold ski nose in the revised profile shape. 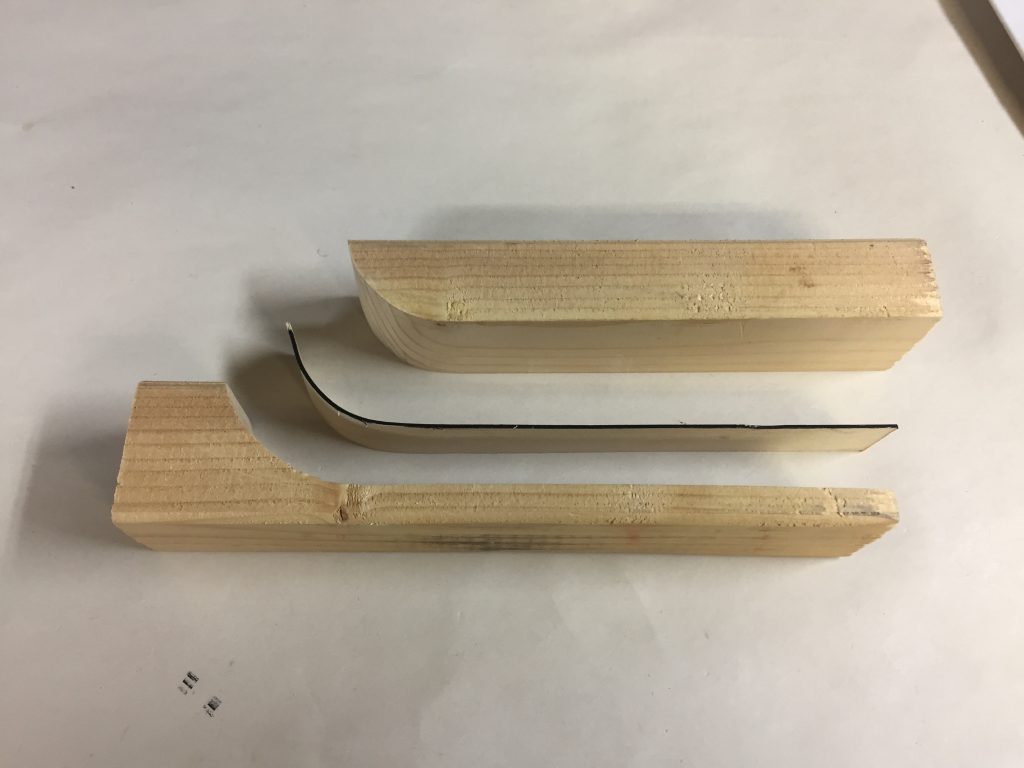 Above shows the dry ski and form. The finished ski is still on the Cub and has sustained several winters of service. The same technique could be used to form the main skis for a smaller aircraft.  A wire from the front of the ski connecting close to the fuselage is required to keep it from dropping forward when flying/landing.  The wind from flight seems to keep the skis relatively level and in a minimum drag position.

I hope this article will get a few more pilots successfully enjoying winter flying.  Our field is several miles from a main road across a farmer’s field which isn’t plowed in the winter. Most of us have 4-wheel drive trucks with tow ropes and equipment to pull you out from the back if you get stuck on the way into the field.