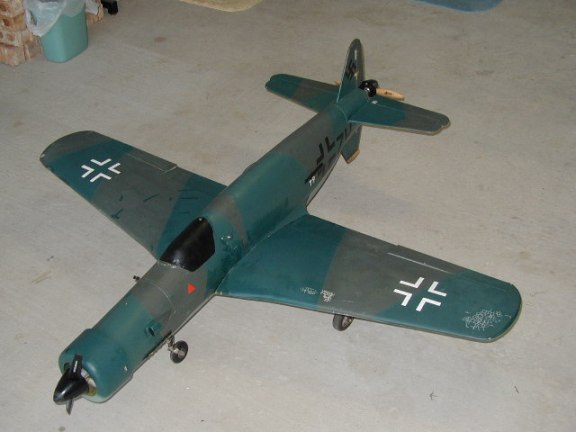 Richard Maus of Round Rock, TX, writes, “Here’s a couple of pics of my Do 335 built from the Al Masters plans that I got from MAN. It may be a bit over the 9 lb. the plans call for, but it still flies great. Everyone who sees it asks which way is it going? Seriously, with a 32 GMS up front and a Magnum bushed 25 in the back it is quite fast. I used a foam core wing instead of the built-up the plans show. I made the templates and a couple of friends cut the foam. It is covered with .5-ounce glass cloth w/finishing resin. Prefect paint was used and has proven very durable. Spring Air retracts with a Robostrut on the nose wheel. The nose gear steering provided some grief in the early going but I got that problem ironed out. It has two throttle servos, two aileron servos, elevator, retractor actutator, nose wheel steering and a rudder servo for a total of eight servos. I did not make the flaps operational per plans but it is stable, though a bit fast on landing. I would like to submit these photos in your Great Builders’ Bash promo in the January issue. I really look forward to receiving your magazine every month and have been a long time subscriber.”