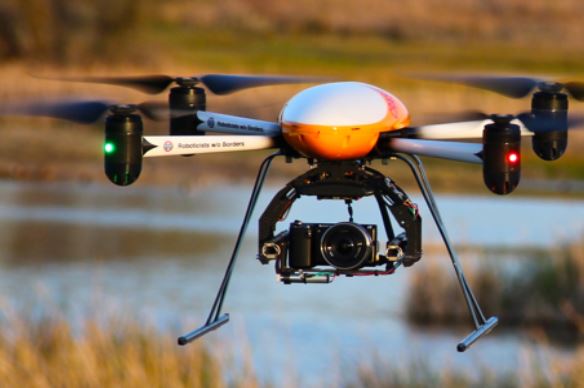 Add search-and-rescue to the list of the Draganflyer’s capabilities! A Saskatchewan man, lost, alone and hypothermic, was found by an RC quadcopter that spotted him from the sky using an infrared camera.  The 25-year-old had wandered away from where his car rolled on Highway 5 near St. Denis, about 40 kilometres east of Saskatoon, early Thursday morning. Emergency crews arrived at the accident scene after midnight, but couldn’t find the driver. “He had suffered a head injury in the crash and became disorientated and wandered off,” said emergency crew corporal Doug Green.

Two hours after the rollover, the man phoned 911 and said he was lost and cold wearing only a t-shift, pants and had no shoes. The GPS on his phone was used to narrow down the search area. A STARS helicopter used night vision and a search light, but couldn’t find him.

That’s when Green came in with the Dragan Flyer X4-ES, a type of unmanned aerial vehicle (UAV) that weighs just over four pounds, with an infrared camera. “When I put the Dragan Flyer up, I put it up in a hover mode … and just did a slow rotation,” Green said. The infrared camera identified three heat signatures within five minutes – one was the missing man, the other two were likely animals, Green explained. “Something hot will be white, whereas cold is dark. So, it’s very easy to spot animals and human beings.”

Volunteer firefighters from the Vonda and Prud’homme fire departments then went to that spot where they found the man curled up in a ball at the base of a tree next to a snow bank. He was unresponsive and taken to hospital with hypothermia. Green said he’s now in stable condition, but this could have turned out much worse without the Dragan Flyer. “We wouldn’t have found him until later on today and he wouldn’t have made it,” Green said. Green has been operating the Dragan Flyer for about a year-and-a-half and said it is typically used to take pictures from the air of accident scenes. He said this is the first time it has ever been used to find a missing person.