First produced in the early 1940s, the Voyager was a light-duty civilian single-wing airplane built by the Stinson Aircraft Company. The new micro RC Voyager from Dromida is an excellent miniature version of the full-size aircraft, and it comes out of the box 100 percent ready to fly. With its attractive paint scheme and molded-in details, the Voyager is a great way to break the old Piper Cub habit while maintaining easy, beginner-friendly flight performance. Let’s take a closer look. 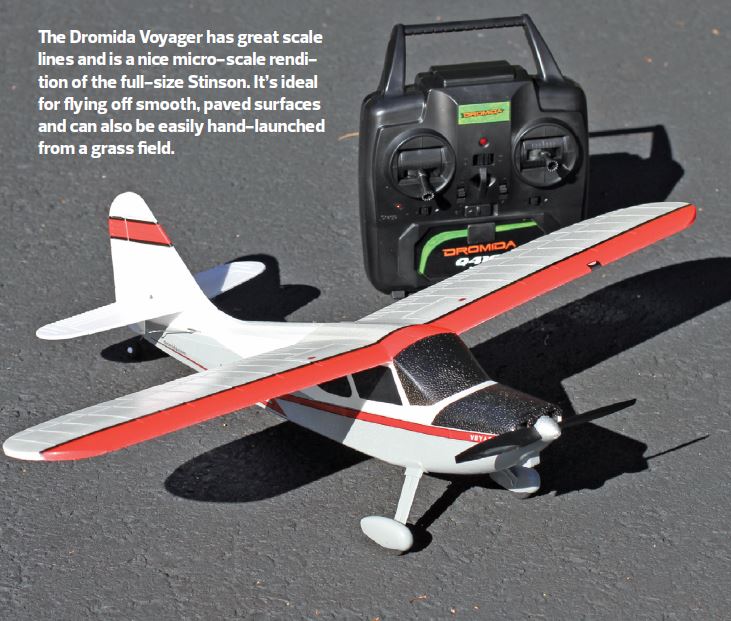 UNIQUE FEATURES
Molded out of lightweight, rugged foam, the Voyager comes out of the box completely ready to fly.  There is no assembly required, and the propeller and spinner are already attached to the motor. The Voyager has painted-on markings as well some stick-on
vinyl decals, and it looks very scale.  The landing gear also comes installed and features molded plastic fairings and wheel pants.  The tires are molded out of lightweight but fi rm foam rubber. Small enough to transport anywhere fully assembled, it has a wing
that’s attached with magnets.  The Voyager comes with a Dromida 4-channel Q410 2.4GHz transmitter complete with four AA batteries to power the radio and a 1S 150mAh LiPo fl ight battery.  The radio provides throttle, rudder, and elevator control;
there are no ailerons.  The charger for the LiPo battery is built into the transmitter, and there is a small covered charging dock on the back right side of the transmitter case. Simply remove the cover and slide the battery into place (the battery is marked with an “up” decal, which should be visible when you insert the connector into the charger port). A red LED indicator will light up while charging and will go out when the charge
is complete. When it comes time to fl y, simply switch on the transmitter (move the throttle to the down/off position) and connect the flight battery to the Voyager’s power lead.   e battery fits into the molded recess in the model’s belly and is held in place with a hook-and-loop fastener.

IN THE AIR
Before each flight, make sure that the wing is properly attached and secured with the internal plastic tab and magnet. Attach the fully charged battery pack, and check to make sure that the controls move in the proper directions.  There are small switches under a rubber cover on the can be adjusted if needed. There is no need to
check the balance of the model as there is only one place to install the flight battery.
Stability: The Voyager is very easy to fly, and the slight amount of wing dihedral provides
positive flight stability.
Tracking: Stinsons were known for their characteristically large fins, and the model
has the same scale shape of its tail. With so much vertical area, the Voyager has great flight tracking. With its steerable tailwheel, ground handling (on a smooth surface) is also very positive. Being a 3-channel design, there is no adverse yaw created by the ailerons, so turns are very easy.
Aerobatics: For a 3-channel airplane (without ailerons), the Voyager has enough power for lively performance. You can loop with ease, and the model has good vertical climb performance. Tight high-banked circles are fun, and with a little practice, you can coax a decent wingover out of this micro flier with ease. Outdoors, after a bit of a dive to build up some speed, you can also do a nice barrel roll and even a bit of inverted flight, with forward elevator stick pushed in.
Glide and stall performance: Weighing in at just under 2 ounces, the Voyager has an incredibly light wing loading, so it is difficult to get into trouble and accidentally stall the model. It glides easily with power off , and the Voyager is so docile that, even with full rudder and elevator, you get more of a spiral descent than a true spin—all good things for any beginner’s airplane. 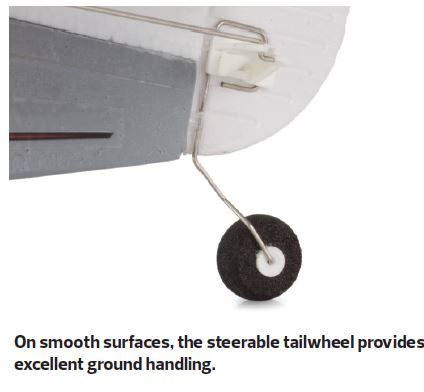 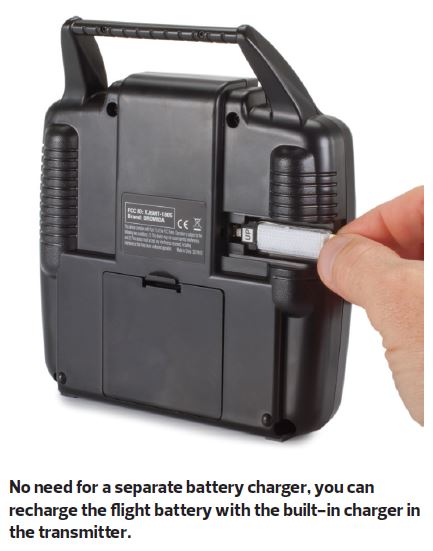 PILOT DEBRIEFING
I flew the Voyager in a medium-size gymnasium. I was able to fly the model easily in climbing and descending circles with only throttle and rudder trim. A few clicks of trim
made the orbits wider or smaller, and some minor throttle-stick adjustments kept the model from climbing too high. Touch-and-gos while flying figure-8s were also a lot of fun. It’s a lot of low-pressure fun in a small package.
BOTTOM LINE
Intended for beginners and first-time pilots, the Voyager is an attractive and scale-looking micro RC plane that’s easy to fl y. With slow and docile fl ight characteristics, the model is ideal for indoor flying areas and outdoor flights under calm wind conditions. If you are looking for a pilot-friendly flier for micro RC fun, the new Voyager from Dromida is an excellent choice. 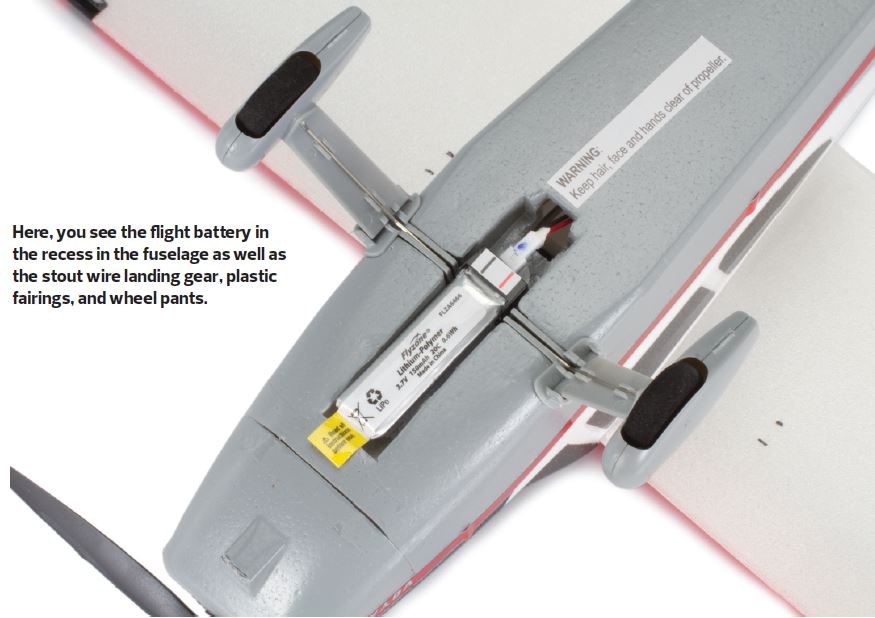