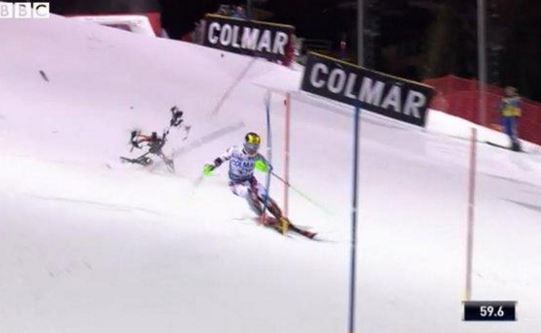 At the World Cup in Italy last night, a camera drone crashed just behind skier Marcel Hirscher during a slalom. Race director Markus Waldner told The Associated Press that drones will be prohibited “as long as I am responsible …. because they are a bad thing for safety.”

The unmanned flying object carrying a TV camera came down and shattered on the icy slope just behind Hirscher during Tuesday night’s race in Madonna di Campiglio. The four-time overall champion was unhurt and continued his run, finishing second behind Norwegian winner Henrik Kristoffersen.

“It was huge luck that Marcel was not hurt,” Waldner said. “I am very angry.”

The company responsible for the camera drone, sports-marketing agency Infront, said in a statement that “the circumstances leading to [the crash] are currently being examined.”

As for Hirsher, he later tweeted about the incident with the hashtag #luckyme.