How many times have you walked the flightline at a scale meet and drooled over the oh-so-real-looking dummy engines sitting in the noses of the competition models? Building such a scale dummy engine for yourself is not as difficult as you might think. Let’s use the engine from my 1/5-scale Pfalz D.III as an example. It’s a 6-cylinder, 160hp Mercedes in-line scale dummy engine and it really improves the model’s overall scale appearance. I hope that once you learn how easy it really is, you will be inspired to use your own creativity and ingenuity to the make your own. 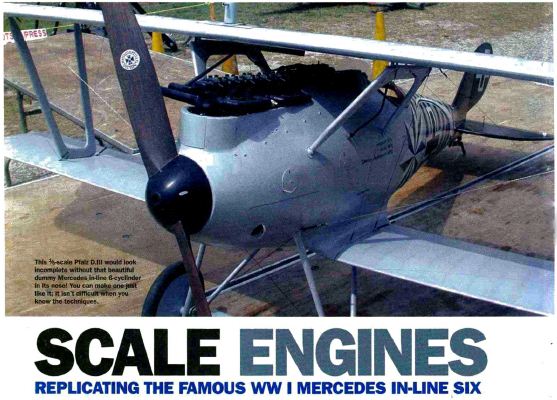 To earn a good static score in scale completion your model must include at least some visible engine detail if the full-size aircraft’s outline includes it. With this technique, a dummy engine tremendously enhances a good model and it can serve as a welcome diversion from other construction tasks. There’s no doubt about it: the addition of  a few well placed details makes a big difference

It’s difficult to specify which materials you’ll need; you simply want the result to look like the engine you’re modeling. Use your creativity and whichever resources are available. I use leftover pieces from my workshop and find other materials at my local craft store and around the house. There are no rules; use your imagination. The fun part is that it feels as if you are doing an entirely different type of modeling, and the results can be achieved with minimum effort.

Start with a good drawing of the engine. If you are building a 160 or 180hp Mercedes, you are in luck; Air Age Media’s book “Scale Aircraft Drawings, Vol. 1, World War I” is available at rcstore.com. It contains detailed William Wylam’s 3- and 4-view drawings of several vintage engines. Copy and enlarge the engine drawings you need to the scale that matches your model, and then place these enlargements over your model’s plan to check the new dummy engine’s fit. You can also cut out the drawing components to use as templates to develop the various shapes of the wooden patterns to make built-up and vacuum-formed plastic parts. 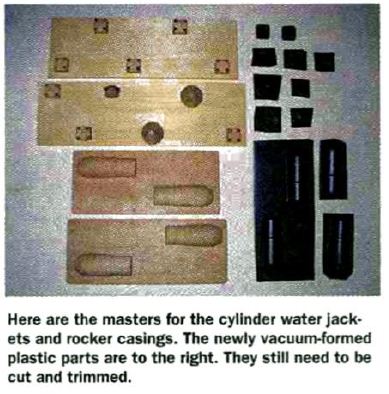 At first, the project may seem a bit overwhelming because so many little pieces go into making a first-class replica engine. Just remember that not every detail has to be duplicated. For flying models, all you need are the basic visible outlines and a few other small, well-placed detailed parts that help “sell” the overall illusion.

Break the engine into its most basic and prominent components and shapes. The most outstanding elements of the Mercedes are its 6-cylinder water jackets, the camshaft/rocker casings, the intake manifolds, the rocker arms and valve springs and the exhaust. In the case of a multi-cylinder engine, you will have to make several duplicate components to assemble each of the cylinders and their associated parts. It is best to make each part once and then use it as a master or plug to duplicate the remaining identical pieces. I made wooden forms and then duplicated the parts using a homemade vacuum-former. Another way to duplicate parts is to press your material into clay and then cast copy pieces out of polyester or epoxy resin. This technique works equally well but produce a slightly heavier engine. With short-nose WW I models, additional nose weight isn’t usually a bad thing. Use whichever process you prefer.

A lathe is a big help when making cylindrical parts; that’s what I used to make my hardwood water-jacket mold masters. 1 used 1.125- inch-diameter dowels turned down to create the proper shape. I then cut the water jacket in half with a band saw and glued the halves to a piece of 1/4-inch plywood. I next drilled 0.031-inch-diameter holes around the perimeter of each part so that suction would pull the plastic tight around them.

I made the forms for the rocker casings out of a strip of hardwood. I shaped the strip along its top surface using a sanding block and then cut it into six short lengths to produce each rocker casing. I ended up with six nearly identical pieces, each with the same radius across the top. I then glued very short lengths of thin dowels to the four corners of each rocker casing to represent the bosses on the full-scale casings. I next glued the rocker casings onto a piece of 1/4-inch plywood for vacuum-forming. After the casings had been vacuum-formed, the natural radius formed in the plastic material around each of the bosses made the finished parts look as if they were one-piece castings. When you’ve assembled and glued all of your master parts onto a plywood base, you’re ready to form the basic parts. 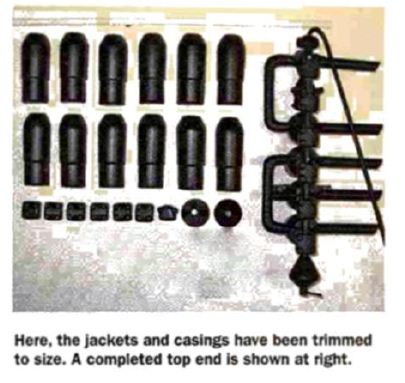 Commercial vacuum-forming machines are available, but they’re expensive. For more information about vacuum-forming
, the book “Do It Yourself Vacuum-Forming for the Hobbyist,” available from MicroMark (item no. 80868, $14.95), is a big help. You can make your own vacuum-former by building a square box frame using two pieces of smooth hardboard for the top and bottom. Drill 1/16-inch holes in the top surface in a 1-inch-square grid pattern; then seal all the seams and borders with silicone sealant. In one side of the box, cut a hole to fit the attachment of your wet-and-dry vacuum hose, and you’ll be good to go. I made my vacuum-former 12 inches square.

To support the plastic sheeting, I made a layer frame that was larger than the box (14×14 inches) and allowed room to use small C-clamps around its edges. I cut a 7inch-square window through the upper and lower frame pieces and applied thin foam tape to the perimeter of the box lid to allow the bottom frame plate to be sealed against it. I then sandwiched the plastic sheeting (0.040- to 0.060-inch-thick styrene) between the frame plates and clamped them tightly. Place the frame and plastic in an oven that has been heated to 350 degrees F. When the plastic starts to droop, turn on the vacuum, remove the plastic and frame from the oven and carefully lay the plastic over your master parts. With practice, you will be on your way to making your own Mercedes engine kit.

BACK TO THE ENGINE

Cut and trim the formed-plastic water jackets to size, and glue the halves together using Pacer Plasti-Zap or Testors plastic cement. You can reinforce the seams on the inside using short strips of scrap plastic. Drill a hole in the center of each of the bosses on the rocker casings from underneath; then inset snugly fitting 2-56 screws. Thread on a 2-56 nut to each screw-stud where it protrudes through the casing, and secure the nuts with a dab of CA. The rocker casings can now be trimmed and assembled over a long styrene tube to represent the camshaft housing. All of the water jackets can be secured with tubes of a smaller diameter that represent the water-inlet tubes between the water jackets on the full-size engine. The idea here is to construct as many sub-assemblies as you can to form larger, easier to handle engine parts.

I made the intake manifolds out of balsa that I carved to shape and then wrapped with black, 1/4-inch-wide automotive pin-striping tape. After it has been carved and sanded to shape, coat the balsa with fiberglass resin to seal it; this gives the tape a smooth surface to stick to. On this particular engine, the exhaust tubes were simply straight pipes, so I used lengths of K&S aluminum tube to duplicate them.

To make the rocker arms on my model, I used ordinary wire-termination lugs right out of the toolbox. I secured the screws going through the terminal holes, and then I glued them to the rocker casings. To make the engine’s valve springs, I found small-diameter springs (similar to those used in ballpoint pens) and cut them to length with a wire cutter. They aren’t exactly scale, but from 5 feet away, they look pretty good. Unless you intend to compete at the FAI World Scale Championships, all you need to do is create the illusion of scale. If you don’t have small items such as springs and lugs in your shop, you can find them for very little cost at a hardware store or through a specialty company such as McMaster-Carr (mcmaster.com).

Once you have the basic engine structure assembled, you may have to remove some portions of it so it can fit into your engine cowl and around your model’s glow engine. You must also install some hard-points in the model to attach the engine securely in place. The attachment points will vary with each installation. On my Mercedes, I used a brass strap with two mounting holes drilled in it. I screwed and epoxied the strap to the rear of the engine and then used two screws to secure the strap to the airframe. I cut the front of the dummy engine so it rested neatly between the rocker-arm covers of my O.S. 1.20 FS engine. A few dabs of Zap-A-Dap-A-Goo hold the front of the dummy engine against the O.S. engine. 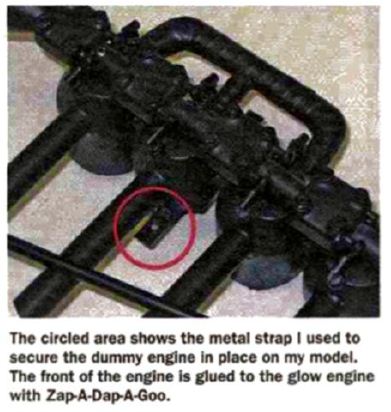 It is important that your dummy engine be easy to remove so you have easy access to your model’s RC engine, fuel lines, etc. Once your dummy engine has been properly attached to the model, remove it again and paint it. I simplified things by painting mine all black, but you can use other colors on the various parts. I also painted the valve covers on my model engine, and this helps them to blend nicely into the dummy engine. A little dry brushing with silver paint and a stiff brush, or even simply rubbing it with some Craft Store “Rub-n-Buff” will do wonders in bringing out the details.

These are just a few of the basics needed to create a really splendid dummy engine. Keep your eyes and mind open, and you’ll see that it’s very easy to come up with various simple ways to make the many required detailed parts. Break the engine down into its sub-components, make the components individually, and then assemble them and paint. Even using the simplest forms—which may not be exactly scale—you’ll be able to fill that empty space in your model’s engine cowl!

This is a reprint from our archives of classic scale modeling articles.