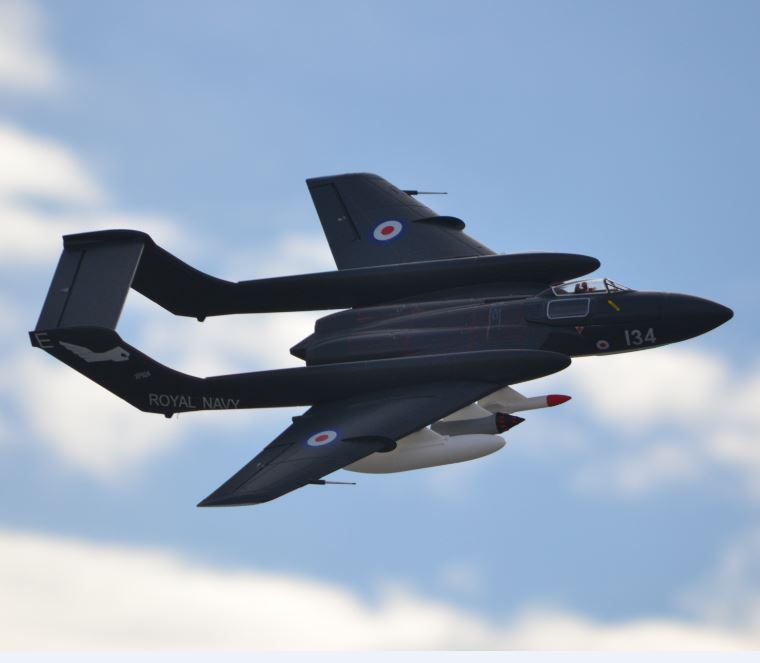 The DH.110 Sea Vixen is a twin boom, twin-engine British two-seat jet fighter developed in the 1950’s by the famed aircraft company de Havilland.  This all-weather fighter/ground attack aircraft was best known for its very distinctive and unusual cockpit arrangement, the pilot’s cockpit being offset to the left and the observer sitting in the infamous “coal hole”, which was virtually blacked out and very cramped, on the right side.  The DH.110 prototype was the first two seat aircraft to achieve supersonic flight.  However, once re-designed for carrier landings the new thick wing prevented the Sea Vixen from achieving supersonic flight despite the huge amount of power from the twin Rolls Royce engines.  The DH.110 was adopted by the Fleet Air Arm (FAA), the branch of the British Royal Navy responsible for the operation of naval aircraft, which used it as a carrier-based fleet defense fighter well into the 1970s. 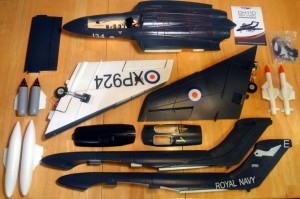 Durafly, known for their high quality planes, has added the Sea Vixen to its already impressive lineup of military scale aircraft.  Made from durable EPO foam and adorned with waterslide decals the Sea Vixen screams with scale detail.  The box is well packaged insuring no damage while shipping, but the best part about the box is opening it and seeing this beauty for the first time.  I was blown away at first sight; the detail on the airplane was nothing short of amazing.  Aside from the lack of landing gear doors and scale pilot everything was perfect.

UNIQUE FEATURES
I received the Plug-N-Fly (PNF) version of the plane because the ARF was not yet available.  The PNF version comes with everything you’ll need except the radio, receiver and battery.  This version also includes a pre-installed 70mm EDF unit, 45A ESC, 5A UBEC, 4 servos and electric servoless retracts with scale struts.  A full range of ordnance and drop tanks is included which add to the scale appearance of the Sea Vixen.  Installation of the ordnance and drop tanks is optional, leaving them off improves performance, less drag, but putting them on completes the scale package.  The included 9-page manual consisted mainly of color photos with brief descriptions of the assembly process, which is more than adequate to get the airplane together. 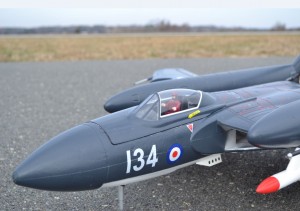 Assembly was very quick with the PNF version of the Sea Vixen.  All that remained after opening the box was to attach the control horns and pushrods to the ailerons and elevator and their servos, glue the canopy onto the cockpit and glue the wings, booms and horizontal stabilizer into place.  I did notice that the provided screws to attach the controls horns to their appropriate surfaces were too small.  I glued them down and replaced the screws for extra security.  Next step was to run the included servo extensions along the pre-cut slits on the wings and booms into the cockpit area.  The supplied battery connector attached to the ESC was a XT90, I replaced it with a Deans connector for compatibility with my battery.  The last step is to attach the accessories, the antennas and cannons fit into pre-notched slots on the leading edge of the wings and the ordnance fit snuggly into pre-cut slots under the wings.  Be careful, the pylons are shaped for the right and left side of the plane, so double check before gluing.  I used 5-minute epoxy on the structural elements and hot melt glue to keep the accessories in place. 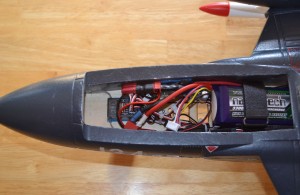 To power the 70mm EDF I used a Turnigy 4s 3300mAh 40C lipo battery.  The manufacturer recommends a 4s 3300 lipo with a minimum of 25C to handle the higher amp draw of the EDF.  The radio system is a Spektrum DX8 with an AR600 rx which fit perfectly in the nose compartment.

CONCLUSION
The Durafly DH.110 Sea Vixen is one of the best scale EPO foam models I’ve ever seen.  The manual is easy to follow and assembly was a breeze.  The ARF version is now available which includes the 70mm EDF fan unit, landing gear struts and no electronics.  You will need to add your own motor, ESC, servos and electronic retracts.  The Sea Vixen not only looks the part it also flies much like a cold war era jet.  Durafly has once again set the standard with this high quality model which has enough scale detail and features to keep any warbird enthusiast happy. 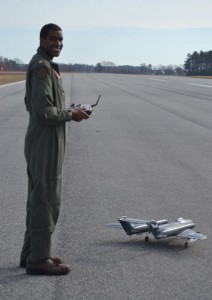 IN THE AIR
The 40-inch wingspan offers a practical size model that can be easily transported, yet at the same time is large enough to have presence and is able to tackle most airfields.  All the parts on the Sea Vixen are glued on, except the cockpit, so there is no assembly require at the field.  The cockpit is held on with magnets, just plug in the battery, wait for the 4 beeps from the ESC and go fly. 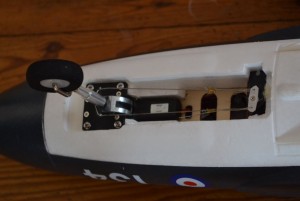 The Durafly Sea Vixen does not include rudders or flaps, which make crosswind takeoffs a little tricky, although it does have nose wheel steering which helps.  I would suggest using a hard surface runway or really short grass for operations, which is normal for most small to mid-sized EDFs.  After lining up into the wind I smoothly applied full power and after approximately 30ft a slight pull on the stick was all that was needed to get airborne.  It didn’t jump into the air like many other light EDF jets, it climbed out with authority yet with grace.  After gaining some altitude I gently turned and settled into an overhead pattern for the trimming and air work.  Only a few clicks left and up trim was needed and scale-like performance was achieved at 3/4 throttle.  The recommended CG was spot on which resulted in a pleasant flight. 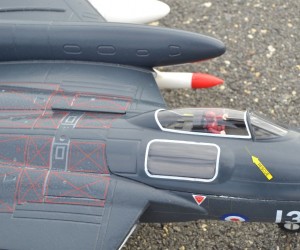 After 4 minutes I started my descent and approach.  With no rudder crosswind landings are just as tricky as the takeoffs, fortunately that day I only had a slight quartering headwind.  The big wing made a nice stable platform for the approach, keep power on until the flare, then slightly reduce to idle and it settles right in.  There is no need for flaps on takeoff or landing, the huge wing enables the Sea Vixen to slow down nicely.

GENERAL FLIGHT PERFORMANCE
Stability:  The Sea Vixen has excellent slow flight characteristics thanks to the massive amount of wing area.  High speed passes are stable as well as eye catching.

Tracking:  It goes where you tell it to go, slicing through the air with ease.

Aerobatics:  Rolls, loops, inverted flight are all easily accomplished.  The 70mm EDF and 4s lipo power system allows the Sea Vixen to scream across the sky at full power.

Glide and stall performance:  Where the Sea Vixen differs from other scale jets is it has low wing loading and amazing power-off glide performance, making it a forgiving model.  There was a slight wing dip at stall but easily recoverable.  Keep the nose slightly down during the glide, leave the landing gear up until just before touchdown and you should have no problem making it back to the field or a safe landing site.

PILOT DEBRIEFING
If you like scale detail, great flight performance and pure fun then the Durafly Sea Vixen is for you.  In the air it’s fast, stable, predictable and reliable.  Whether you are at your local field, fun fly or any event with this plane be prepared to get a lot of attention.  The Sea Vixen is rarely modeled and Durafly has done a fantastic job on this one.  It is ideal for aspiring jet jockeys and a must have for any jet fan!

IDEAL FOR: intermediate to advanced

+Plug-N-Fly, simply add your own RX, battery and fly!