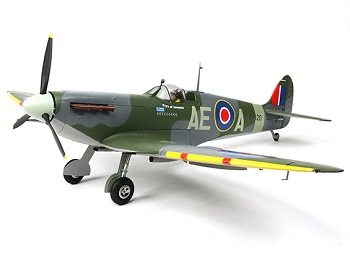 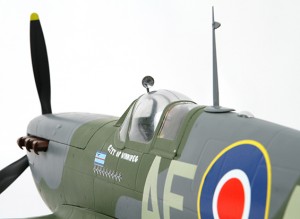 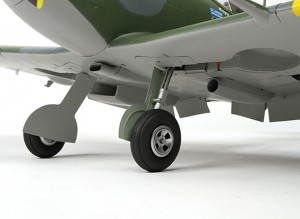 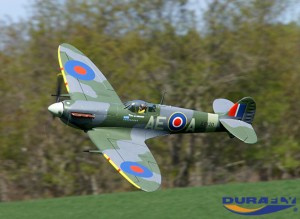 The Supermarine Spitfire is THE defining aircraft of World War 2 and following on from the Mk1a the Mk5 represents the pinnacle of early Spitfire development.   After the defensive campaign of the Battle of Britain, the RAF, RCAF and the USAAF moved steadily onto the offensive and the Mk5 became part of the spearhead of overall allied strategy, including air operations over France, North Africa and later during the Italian campaign.   Better armed, faster and more maneuverable, the Mk5 gave the RAF and other allied air forces including the USAAF, a decisive advantage over the Luftwaffe’s Bf109E and was on equal terms with the Bf109F, battling both of these axis aircraft in the ETO (European Theatre of Operations) as well as in the air war over the deserts of North Africa and the Mediterranean between 1941 and 1943.  Loved by its pilots and feared by the enemy, the Mk5 Spitfire’s reputation as a thoroughbred fighter was hard earned and well deserved and it will always have a special place in military aviation history as a result.

Durafly’s Mk5 Spitfire really does the full-size aircraft the justice it deserves.  Not only has Durafly produced a beautiful and accurate rendition of the Mk5 Spitfire, it brings to market (for the first time ever) a tribute to the gallant pilots of both the RAF and the USAAF thanks to the multiple and historically accurate national markings that have been supplied in the box.  But it’s not just offering you the choice of these unique and authentic markings, the attention to detail in this plug and fly model is simply outstanding for a model in this scale and that is matched only by its superb flying performance and grace in the air.  The Durafly Mk5 is designed for 3s and 4s setups and boasts a range of features typical of Durafly’s exacting standards, especially when it comes to warbirds, including, scale parts, faithfully reproduced split flaps, a scale outline, fine surface detail and a premier paint finish along with an operating LED navigation system.

With this fantastic Mk5, Durafly has designed and produced not just the best, but the ultimate model Spitfire available in this scale and when you get your hands on one, you’ll know that’s no idle boast.