When I first reviewed the original Blade mCX micro heli, I was absolutely amazed at how very stable and easy to fly this new indoor RC micro heli was. Several other companies have since come out with their own variation on the theme, but the Blade mCX was the very first and it set the standard for all others to follow. At last year’s IHobby Show there was a demo model of the new Tandem Rescue version of the mCX flying around, and with its larger size and dual co-axial rotors spinning around, it made quite an impression. I could not wait for our Backyard Flyer review sample to show up!

Just like the original mCX, the mCX Tandem Rescue comes factory-assembled, and ready-to-fly straight out of the box. Control is accomplished with its onboard 5-in-1 DSM2 receiver/ESC/mixer/gyro and servo control unit which again is factory installed. All you have to do is charge the included high-capacity 250mAh Li-Po pack, plug it into the heli and you’re 100% ready to go. Also included in the RTF version is a 4-channel 2.4GHz DSM2 transmitter as well as the variable rate DC Celectra LiPo charger. A very cool feature is the LED navigation lights that light up when the heli is flying.

The overall framework support everything and the scale body is supported with alignment pins similar to the smaller mCX. The landing gear has foam tires and wheels and the bottom of the body is open for easy battery replacement and to keep all the electronics supplied with plenty of air. The motors (four of them) are mounted in pairs at each end of the frame. Gear drives for the dual co-Axial rotor heads are similar to the older heli and used together with the onboard mixer circuitry they provide excellent flight responds. To go up, both rotor systems supply equal lift. To go forward, the aft rotors increase in rpm as compared to the front. To go side to side, the swash plates do their work in tandem to move in the desired direction. To spin around, the swash plates work in opposite directions. All in all a very efficient use of power.

Don’t let the tandem coaxial counter-rotating rotor-head design scare you. This impressive micro heli is just as easy to fly as the original Blade mCX, maybe even a little bit easier. Its larger size gives it a bit more stability against that occasional air current blowing from an air conditioning vent.

With its four drive motor drive system and fully-proportional 4-channel radio, the Blade mCX Tandem Rescue has ample power and the control precision for close-in hovering as well as effortless forward, backward and side-to-side flight. The lightweight formed plastic body has a realistic look and the flashing navigation lights make you feel like you’re piloting a larger more complex aircraft.

To get into the air, it is best to apply throttle smoothly and get the heli up to two or three feet off the ground. The air is much more stable at this height and it avoids the turbulence from the rotor wash. To hover in one place use short smooth control corrections. Try to avoid over correcting and start off with low rates. Once you master the stationary hover, learn to hover from another location relative to your position. Once you can hover from all position around yourself and with the nose pointing at yourself as well as away, you can then safely experiment in forward flight. You can easily do large orbits of the flying area as well as figure 8 and spot landings. It really is a great feeling to mater any RC model, and the mCX Tanden Rescue is very easy to fly. 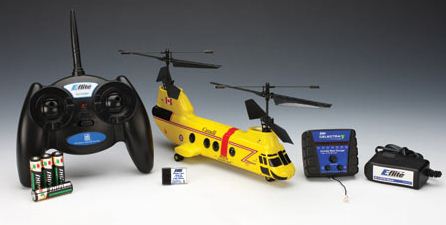 Caption: The Blade mCX comes in a complete package with everything shown here

Everything you need for indoor aerial missions comes in one package. You can turn the lights off and fly “night” ops in your living room. Going on patrols in the kitchen and landing on a hot “LZ” top of the fridge or counter-top will keep everyone on their toes! If you want excitement, the mCX Tanden Rescue can deliver. I highly recommend it.

Captions: Close-up view of the twin motor and gear drive for one of the rotor systems. 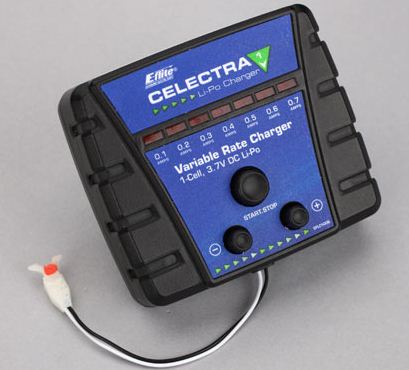