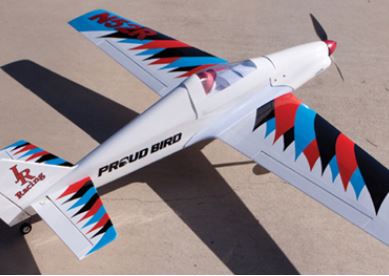 After: The new color scheme makes the Proud Bird really stand out from all the other race planes.

I went over all the covering on the plane and making sure it was set down and shrunk up tight. Then I started cutting out the feather pieces from three different colors of EconoKote–red, black, and light blue. I used EconoKote over MonoKote (which is the covering the factory uses on the plane) because it requires a lower temperature and makes it much easier to apply on top of the original covering. For the wing, I wanted the feathers to be slightly different so I used a French Curve, which is used for drafting and available at an office supply store, to cut them out. By folding the covering in half and cutting through both pieces at the same time, I had two mirrored pieces: one for each wing.

I cut each piece and then laid it on the wing, holding it in place with some masking tape. I continued doing this until all of the pieces were on the wing. Once I had all of the feather pieces laid out and taped down, I realized that I would need another layer of feathers to really give this design some life.

Here is the wing with a second layer of feather pieces added to it. I always like to check my designs by taping them in place so I can see how it looks. In this case, it helped me see that I needed another row of feather pieces. By taping the tips of the bottom row pieces, I was able to remove the upper ones and have the bottom row stay in place. I can also remove the backing off the pieces and still have them remain in place.

The bottom layer was now ironed on and ready for the next layer of feather pieces. I kept the iron so that it was hot enough to stick the pieces down without shrinking them too much and creating wrinkles. I ran the iron over the pieces and worked out from the middle to the outside of each piece to help reduce the amount of air bubbles trapped under the covering. Any bubbles that are left can be removed by piercing them with a small pin and ironing around the hole to let the air escape.

I ironed the top layer on the same way as the bottom. By using the bottom layer as a guide, I could easily place the top pieces along the wing one at a time. For this design, I worked from the center of the wing to the tip.

I did the other side of the wing the exact same way. Because I cut out all the pieces one set at a time, there was a slight difference between the two sides, which is what I wanted. Be sure to follow the same color pattern when laying down any type of pattern that requires different pieces with different colors, that way each side will at least match colorwise.

I needed some smaller feather pieces on the stabilizer and because there was not enough room to make two layers, I decided to make the overlap of the one row much closer. For this reason, I made a template out of stiff cardboard for cutting out the tail feather pieces. Because these pieces are much closer together, I wanted them to be more uniform in design.

Here I am ironing on the last feather piece to the stabilizer. As you can see, these are much closer and look good because they are all from the same cutout. I followed the same color pattern on the stabilizer on the other side. I wiped on some MonoKote Trim Solvent over the entire design to seal down the edges so they don’t come up later on.

The final step for this plane was to attach the custom graphics I had made at my local sign shop, Chelsea MacPherson Visual Designs. This is my racing number after attaching it to the wing; in the next picture you will see my AMA number and my custom designed racing logo on the tail. All of these took a day to make at the sign shop. I just dropped off the design I needed and they did the rest.

Here is the finished design on the Proud Bird. It’s ready for my next race! By using a combination of covering and custom vinyl, it’s possible to add a custom design to any plane and make it stand out from all the other ARFs. Then the plane truly becomes your own. Enjoy!