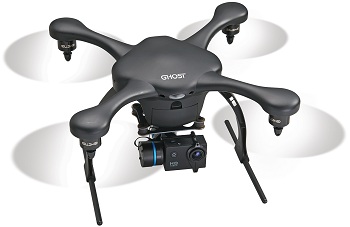 People who have always considered a drone too complex to fly need to know this: that they can make the Ghost do everything they want it to do in seconds, even if they’ve never flown a drone before. The Ghost literally puts control at their fingertips and lets them fly and navigate with the ease of today’s simplest control system.

They can make the Ghost take off, return and land with just a tap on their devices’ screens. What’s more, a tap is also all it takes to make the Ghost fly to a specific destination – or to activate “Auto-Follow” mode and have it track the pilot’s every move. It remains stable and level even in 20 mph winds and will automatically maintain position and altitude while hovering without constant adjustments.

Ghost control is absolutely rock-solid anywhere within its one thousand meter (0.62 mile) range. Fail-safes offer added safety and protection, automatically returning the Ghost to the pilot if the signal is lost or if the battery voltage drops to unsafe levels.

Simple to fly with just a smartphone! Versions for Android and iOS devices!

The Gbox offers the latest in smart technology and easy flying, and versions for both Android and iOS devices. With a tap on the Auto-Follow icon, the Ghost will follow a pilot anywhere without any other commands. Ideal for effortless flying and selfies! Made of strong, aircraft-grade aluminum, the gimbal has vibration-dampening rubber mounts that keep the camera stable even when the drone is not. It’s compatible with many popular cameras, including the GoPro Hero 3 & 4. Camera sold separately.