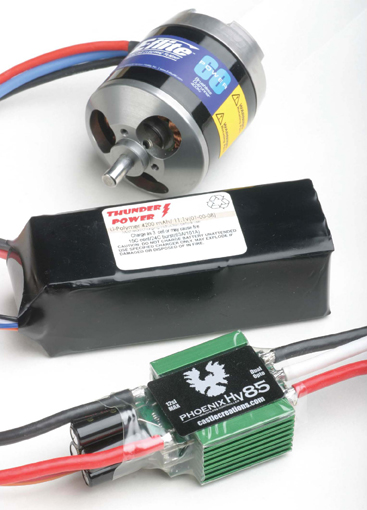 A quick lesson on the ins and outs of electric power

These are the three basic items of electrical power: the battery, motor and ESC.

I OFTEN GET QUESTIONS about electric power that deal with some of the basic concepts of e-power. For example, “What is the C-rating on batteries?” “What does the kV on a motor mean?” “How many amps can my ESC take?” “Why did my motor burn up?” Although all of these questions have been answered at some point, it takes some time to find them. This month, I’ve compiled the answers to some basic e-power questions.

Brushless motors have become the mainstay of e-powered, RC airplanes, and there are many reasons why they have become so dominant in the RC industry. Compared with traditional motors, brushless motors have better speed, greater power, are light-weight and have a greater longevity. Their one drawback is that they require a more advanced controller to operate. The electronic speed control (ESC) has to convert the DC from the battery into three-phased AC that the motor can use. These motors come in two basic types: inrunners and outrunners.

Inrunners were the first motors we had in the hobby. They get their name because their rotational core is contained within the motor’s “can,” just like the standard ferrite motors of which we were accustomed. A well-designed inrunner is extremely efficient. Inrunners will spin exceptionally fast-too fast for our aircraft propellers-and they have a low torque. Because of this, we used gearboxes to reduce their speed and increase their torque.

Outrunner motors have quickly become popular and are now available in many sizes. This type of motor spins its outer shell around its windings. The outer shell will generally have the magnets imbedded. Because of this, the outrunners spin much more slowly than their inrunner counterparts, which have a more traditional layout. However, they produce far more torque. Because they spin the prop with great torque and eliminate the extra weight and complexity of the gearbox, outrunner motors have become the motor of choice for e-power aircraft. 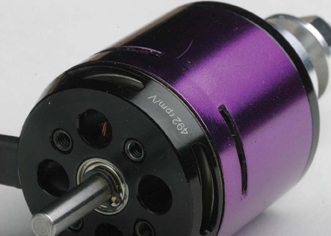 Some motors have the kV rating printed right on them, like this Hacker motor If the kV rating is not printed on the motor, it will be listed in the instructions or on the company website.

The kV rating gives you the no-load rpm that you can expect per volt of current. For example, when powered by an 11.1-volt battery, a motor with a kV rating of 860 will produce a no-load rpm of 9546. Any load on the motor, such as a prop, will reduce this number. These numbers should be used as a guide when picking out motors. As a rule, motors with a high kV value will turn small props at high rpm, so they are good for high-speed aircraft and electric-ducted fans. Motors with low kV are better suited to spinning larger props at lower rpm, so they’re great for aerobatic and 3D planes. 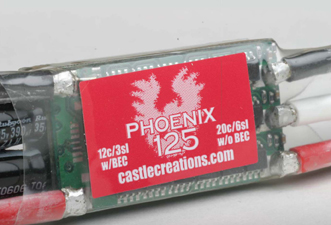 We use watts to measure power in electrics. A good reference point for this is to know that 746 watts equals 1 horsepower. But the problem is that many motors do not list the watts or maximum watts on the box or even the instruction sheet. So, how do you determine the power of the motor and whether it will be enough for your aircraft? Fortunately, watts = volts * amps, and most motors will have the maximum amps and volts listed on the box or the instructions. Multiplying these two values will tell you how well the motor you’re looking at will pull your plane through the air.

Before we look at a specific example, let’s look at how to determine the power requirements of a model, based on the “input watts per pound” guidelines that have been around for some time.

Armed with this knowledge, you only need to know how heavy your model will be ready to fly. Keep in mind, this can just be an educated guess; you won’t know the actual weight until the aircraft is finished. Let’s say that the motor you’re looking at will allow a continuous current of 40 amps (always use the continuous current rating, not the max burst) and 5 to 7 LiPo cells. We know that each LiPo cell is equal to 3.7 volts, so this motor will handle 18.5 to 25.9 volts. Using the previous formula, this motor can produce 740 (18.5 * 40) to 1036 (25.9 * 40) watts of power. That would have decent power to pull around a 10-pound sport aerobatic plane if you ran it on a 7-cell LiPo battery. The same setup would pull a 7-pound lightly loaded 3D model through the air with good authority. A 6-pound 3D aircraft would have unlimited performance with the same equipment. As you can see, this motor could have different performance; it depends on the weight and type of aircraft into which it’s going.

An ESC controls the speed at which the motor turns, and it’s connected to the throttle channel of the receiver. ESCs control the distribution of the magnetic field inside the motors, and this turns the armature. ESCs are rated by the maximum amount of amps you can pull to run the motor. A good guideline is to use an ESC that has maximum amperage that is about 20 percent above what you expect the system to ever need. 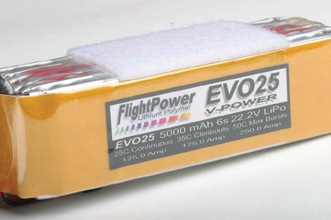 The label on this Flight Power battery tells you exactly how many continous, sustained and burst amps it can handle.

Some computer-programmable speed controls have user-specified options that allow different program settings. These can be programmed in by using programming cards, boxes and computers or just by moving the sticks on the transmitter at certain times during the setup. Programming could include setting low voltage cutoff limits, timing, acceleration, braking and direction of motor rotation. Having control over the different features of an ESC allows you to customize your power systems to your flying needs.

The battery eliminator circuit (BEC) allows pilots to use the large battery that powers the motor as a source of power for the receiver. Typically, the BEC is built into the ESC but you can buy it as a separate unit. The BEC’s task is to reduce the voltage from the battery to the receiver. The other job of the BEC is to divert the last remaining voltage from the motor battery to the receiver, so that the pilot can still control the aircraft after the motor quits. It does this with a motor cutoff feature that turns off the power to the motor when the battery is running low, leaving enough power to operate the radio system for some time.

Milliamps per hour (mAh) is often used to refer to the output capacity of battery packs. This is the amount of current you can expect to pull from your packs during normal operation. Think of mAh as how much flight time you can draw from the pack. A smaller battery, like a 2400mAh pack, will provide a shorter flight time than a larger pack, such as a 4200mAh pack.

Voltage is often used to increase the power to the motor. Supplying more voltage to the motor will make it spin faster and will also produce more rpms for the prop (see kV previously). The faster the prop moves, the more speed and power you’ll get from the plane. Think of voltage as power and performance.

Battery packs have cells arranged in different configurations; this is often referred to as series (s) and parallel (p). When connected in series, the negative terminal of one cell connects to the positive terminal of the next cell and so on. If you have 3 cells connected in this manner, it’s called a 3s pack. A series-connected pack supplies more voltage than a single cell, and the amount depends on how many cells are connected in this way. In this example, the 3s pack has 3 cells x 3.7 volts, which is equal to 11.1 volts.

Every e-power pilot will benefit from visiting these basic electrical concepts. Having this knowledge at your fingertips will make your next electric conversion that much easier. Once things become easy, they really start to become fun- enjoy!