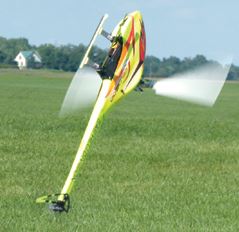 For power-hungry 3D applications and heavier scale machines, is it better to generate the required watts with more amps or with higher volts? Let’s look at some real-world examples and see what’s going on behind the curtain.

JOULE’S LAW
The crux of the problem for high-current power systems is that power losses increase with the square of the current. This relationship is embodied in Joule’s First Law, which is expressed as Q = I2 * R * t, meaning that waste heat produced (Q) equals the product of current squared, resistance, and time. Since joules per second = watts, we can reduce all this to the shorthand of I2 * R.

Because losses increase with the square of current, you can see that doubling amps (which you’re doing if you run a 3S pack instead of a 6S pack) carries a penalty in lost efficiency, and this penalty still gets larger if your motor has relatively high resistance or if you’re pushing the capacity of your wire or connectors.

Table 1 shows some realistic figures for resistance losses for 450- and 600-class helis. The 450-class heli is shown with 3S and 6S battery packs, and the 600-class machine is shown with 6S and 12S packs. If this is a little too much detail, or the thought of all of this math makes your eyes glaze over, don’t worry about it. The key numbers are in the final column, but I felt it was important to show my work for those interested in examining the details.

*Total waste heat calculated based on a flight time of 3-½ minutes.

Voltage is your friend. Particularly for high-power systems, given the choice between high amps or high voltage, the latter wins almost every time.

The heavier the gauge, the lower the resistance, but the greater the weight. Resistance is a function of length, so keep wires as short as practical.

The key lesson is this: even allowing for thicker (and therefore heavier) wire and the lower internal resistance of higher Kv motors and larger LiPo packs, the high current setups generate 60 to 70% more waste heat than the high-voltage alternatives. And this figure is actually optimistic for two reasons. First, this study makes no attempt to capture the increase in resistance as things heat up over the course of the flight. Second, the Scorpion motors used as examples are some of the best on the market. It’s no accident that many of the cheaper outrunners don’t publish specs for winding resistance; there are some things they’d rather you didn’t know.

While higher voltage setups have a number of advantages, particularly for high-power 3D helis, there are some persistent misconceptions about them as well. Over and over, I hear fliers claim that because you’re running half the current, you can use batteries of lower C-rating. This shows a basic misunderstanding of what “C-rating” really means.

Simply stated, C-rating is a multiple of the capacity of the battery. So, a 20C-rated 5000-6S battery can be expected (if you believe the optimistic ratings) to handle up to 100 amps (20C * 5 amp hours = 100 amps). Now, this column illustrates the issues that occur at current this high, not to mention you’d empty the pack in three minutes, but let’s leave all that aside for the moment.

If you doubled the voltage to 12S and cut the current in half, you’d use a 2500-12S battery, which would have to put out 50 amps. Because C-rating is a multiple of capacity, you’d still need batteries rated for 20C (50 amps ÷ 2.5 amp hours = 20C). So, while higher voltage and lower current offer a number of advantages, being able to use batteries of a lower C-rating is not one of them.

Connectors come in all shapes and sizes, but their key spec is current rating. It may seem strange, but if the current is kept within their specified limits, even the tiny 2mm bullet connectors are capable of handling 500 watts or more.

Motor Efficiency: The Missing Piece of the Puzzle

I’ve illustrated the cost of running very high currents in an electric heli—but it only tells part of the story. While winding resistance (Rm) is an important consideration in calculating losses, an equally important factor is motor efficiency.

Real-world efficiencies for electric motors—as measured on a dynamometer —can be all over the map. Some high-quality brushless motors can hit efficiencies in the 90% range, while others may be under 60%. This is particularly true of some very low-cost outrunners. This isn’t to slam the low-cost motors, but only to show that everything – even saving money – comes at a price.

Bear in mind that watts lost to efficiency are shed in the form of heat. And if you’re running 60 or 80 amps in a motor that’s 60% efficient, we’re talking about a lot of heat. Fortunately, outrunner motors cool themselves fairly efficiently if they have sufficient airflow, but it’s still an issue that needs to be considered. If your motor is too hot to touch after a flight, you might want to look at a better motor.

Large differences in efficiency can really make a difference, particularly at high currents. It’s not just a question of reduced flight time (although this is a consideration). If you’re pumping 40 amps into two motors, one 30% more efficient than the other, the more efficient motor will deliver more watts to the main shaft, resulting in higher head speed. Trying to raise the current enough to offset this loss becomes an exercise in chasing your tail. You raise the current, the motor wastes even more watts and runs even hotter. And all the while, Professor Joule is taking his cut as well. This is the reason that serious heli flyers look for the most efficient motors they can find; whether for smackdown 3D acro or for flying 40-pound scale birds, when performance counts, efficiency matters.

CONCLUSIONS
So. What can we take from all this? As has been stated previously, voltage is your friend. Particularly for high-power systems, given the choice between high amps or high voltage, the latter wins almost every time. Not only does a high-voltage setup have lower resistance losses, but you can also get by without using welder wire and massive connectors.

There are a couple of important caveats however: resistance losses only become significant at higher currents. At lower head speeds, 450-class helis will fly quite happily at 12 amps, and 600-class machines will fly nicely at 20 to 25 amps. It’s only if you’re pushing the performance boundaries that resistance losses become really significant. Also, the lower capacity packs used when you increase voltage do not enjoy all the advantages that are often ascribed to them (see “C-rating” sidebar). Finally, this isn’t just a question of 3S versus 6S or 6S versus 12S. Owing to cell performance, 2200-4S can be a very good battery for high-performance 450s, and 8S or 10S is a nice “in between” option for 600s.

In the end, you have to weigh all the pros and cons, but having given this a lot of thought over the years, I believe currents much over 50 or 60 amps are a less than ideal solution. Lithium polymer cells are inherently high-voltage devices, and it’s wise to take advantage of that fact.