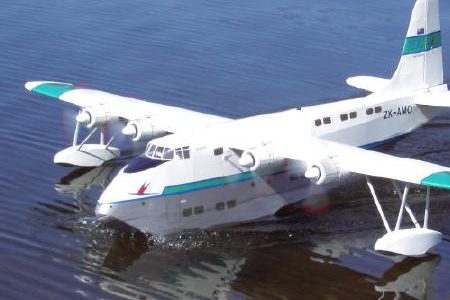 This terrific video features legendary designer/builder Ivan Pettigrew flying one of his very popular float planes, the Short Solent 400. Powered by four GWS Speed 400 geared motors (remember those?!), it can fly for over 15 minutes on eight 3,000mAh NiMH cells. Videographer TripleThreatRC writes, “I was invited to visit the Chilliwack Electric Flyers Club to check out the action at the 2017 Ivan Pettigrew Land and Float Fly in British Columbia. The highlight of the day was getting to meet Mr. Pettigrew and to watch him fly one of his very popular float plane designs, the Short Solent. The wingspan on the Short Solent 400 was kept to 82 inches to make it easy to transport. Ivan also has plans for a 99-inch version, the Short Solent 480. Ivan is just a few ticks of the clock away from his 88th birthday and it was an honor to spend some time with him. Ivan hails from New Zealand and amongst other things, was a school teacher and then a professional pilot who flew missionaries all over South America paving the way for other adventurous pilots that fly from rough, short take off and landing runways as well as flying from runways at extreme altitudes (of more than 14,000 feet).”

Plans for Ivan’s planes are available at ivansplans.com.