The full-scale “Beast” biplane is owned and operated by Bryan Jensen of Ponte Vedra, Florida.  Bryan is a fellow University of North Dakota graduate and a current Airbus A320 Captain for Delta Airlines.  When not working for a living, Bryan performs in air-shows throughout the country with his awesome “Beast.” Although it is a lot like a Model-12 biplane, that’s where the similarities end.  Designed by Kevin Kimball of Jim Kimball Enterprises, Bryan’s show plane has a thrust-to-weight-ratio (TTWR) of more than 1:1. Modifications to a stock Model-12 airframe including a switch to a single place cockpit and canopy and new lightweight yet extremely strong construction were the beginning.  A re-worked Vendenyev M14P 9-cylinder radial engine gives the Beast a takeoff roll of only two seconds and a climb rate of about 4,000 feet per minute.

What really makes the new Hangar 9 giant scale Beast biplane story unique is that it was a collaboration. While the full-size plane was being developed, Kimball worked with the father of 3D aerobatics Quique Somenzini who aided in the design of the man-carrying Beast. Once that project was completed, Quique took what he had learned and created a licensed reproduction, 100cc Beast that reset the bar for both lightweight construction and unbelievable 3D and precision aerobatic performance. 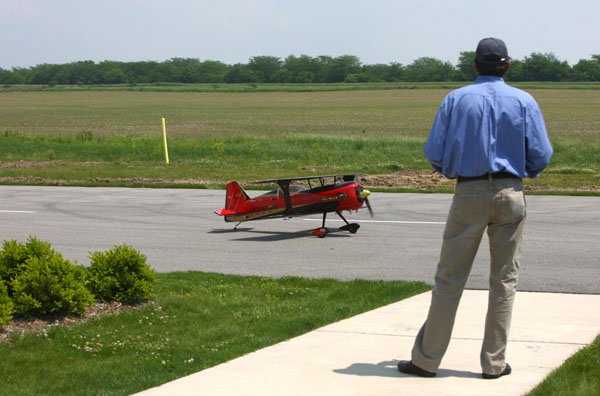 Constructed of balsa, lightweight ply and covered with Ultracote in authentic markings, the Hangar 9 Beast is truly one of the best precision, high-performance airplanes offered as an ARF.   A generous assortment of high quality hardware including control horns, turnbuckles, ball links and aluminum landing gear are included.  Additionally, the kit includes a perfectly painted two-piece fiberglass cowl, fiberglass wheel pants, carbon fiber wing and stabilizer carry-thru tubes and a pilot bust. For ease of storage and transport, the Beast features plug-in panels for both the top and bottom wings. Although not intended for a beginner, anyone with intermediate ARF assembly experience and flying skills will have no problem with this beautiful Beast. 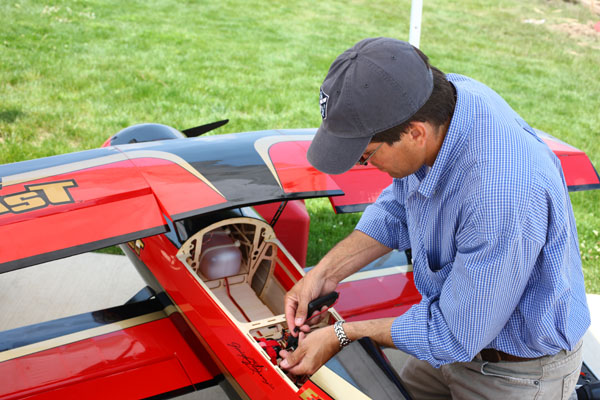 Each of the control surfaces utilize HingePoint-style hinges. All four ailerons and one elevator half come pre-hinged from the factory leaving the other elevator half and the rudder for you to finish. (The elevator is left off so you can slide the stabilizer into its slot.) Hanger 9 uses the very best hardware. Each control surface has a solid rod control horn using ball links and turnbuckles for the control rods.  A 5/32-inch open-end wrench is used for the turnbuckles to make the final rod-length adjustments.

I installed the new JR DS8911 HV servos that are specifically designed to operate with unregulated 2S 7.4v packs. These metal-gear servos offer an unbelievable 470oz./in. of torque in a standard servo case.  They also eliminate the need for a voltage regulator which of course has the added benefit o
f saving weight. 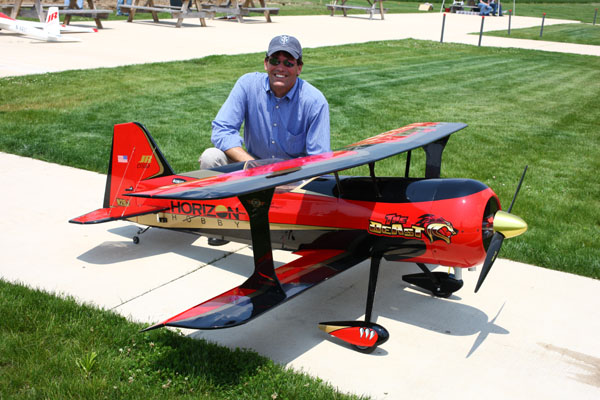 For control, I used the JR 12X DSM2 transmitter and a JR R1222 2.4 receiver. This combination allows for the use of individual channels for every servo; a pre-programmed 4-aileron selection is in the set up menu and making for very easy calibration of dual elevator servos without the use (and weight) of multiple JR Matchboxes. The R1222 2.4 receiver also has four remote receivers for added reception reliability.

For the business end, I hung on the firewall a new, lightweight DA100L twin cylinder engine from Desert Aircraft. The mounting holes on the firewall come pre-drilled with blind nuts installed for this 100cc engine and everything lined up perfectly. For the finishing touch, I used a Mejzlik 26×12 prop outfitted with a beautiful Tru-Turn gold/yellow anodized spinner. Tru-Turn drill the holes and cut the openings to perfectly fit my engine and propeller combination.

I also used a stock smoke mufflers and a Sullivan Skywriter electronic smoke system to complete the package. 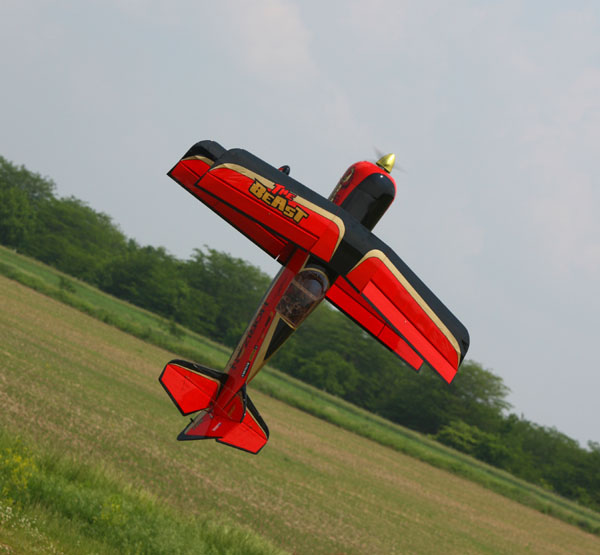 I couldn’t be more pleased. Assembly of the Beast was straight forward as I have come to expect from Hanger 9. Everything, and I do mean everything, fit perfectly together without any modifications.  For this review I had a pre-production airplane and still every hole lined up perfectly, every blind nut was where it was needed and every piece was made precisely how it should be. If you want perfect, the Beast is it. 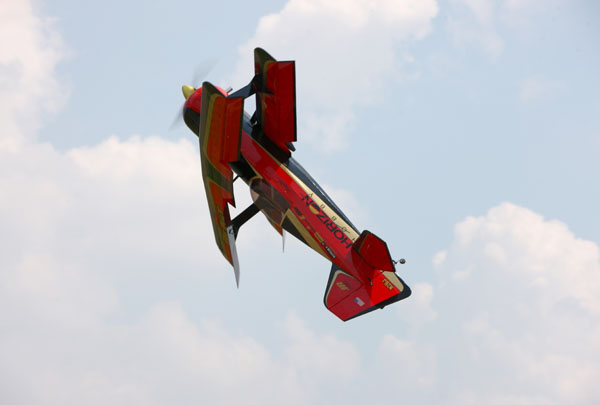 For the flight review, I was given an amazing opportunity to travel to Champaign, IL and visit the home of Horizon Hobby. I toured their facility and meet many of the people I only knew from phone and email conversations. Oh yeah, and I get to fly one of only two other Beasts in the country at Horizon’s club field and its gorgeous 800-foot paved strip.  To top off my trip, I met the designer of the Hangar 9 100cc Beast Quique Somenzini.  Senior Product Developer David Payne and his wife Kim offered me this opportunity while my review Beast was still in the assembly stage awaiting final adjustments and tweaks.  To say I was a bit on the nervous side is an understatement.  Have you ever had your thumbs shake?  I didn’t think it was possible but as it turns out, mine did.

Starting the DA100L is a snap.  Close the choke, flip two or three times until it pops, open the choke, give it another flip and it was ready to fly. David had set me up with IMAC type control throws, similar to flight mode 1 from the manual. A short taxi, a last minute control check and a confident thumbs up from David meant it was time.  I applied the power slowly to ensure directional control and as the airplane accelerated, a small amount of right rudder and a hint of up elevator had the Beast flying in less than 80 feet without any effort at all.

The nice thing about David’s Beast was that it needed no trimming and the airplane was so stable right from the beginning that it gave me a lot of confidence. It behaved exactly the way I like, it is a very honest airplane. 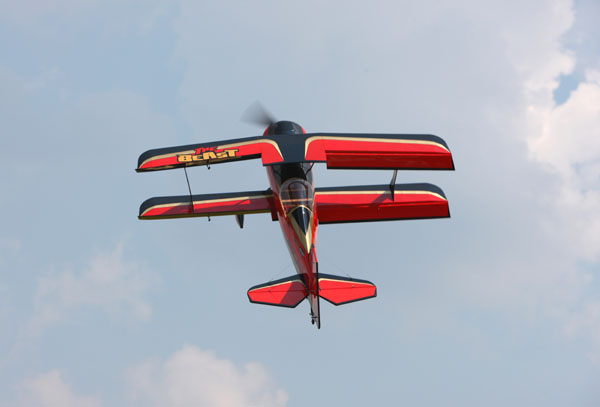 After several minutes of basic fly-bys, loops, rolls, hammerheads, tail slides etc, David talked me into trying a few tumbles.  Applying what I know from full-scale flying, the techniques are very similar but I didn’t need more than three quarter throttle. It seemed that if I kept the controls deflected and gave a short burst of power at just the right moment, it would just tumble and tumble.  I sure wish I could do that in the real airplane.  To recover, reduce the throttle, neutralize the controls and fly out of the maneuver. Are you getting the feeling I kind’a like this thing?

After 12 minutes the timer began to beep so I made one slow pass and was happily surprised again at the Beast’s stability at relatively slow speeds. The next approach was slow and stable using just a small amount of throttle to control the descent.   In ground effect, I reduced power and the Beast settled onto its gear as if I knew what I was doing. We flew all afternoon in the scorching sun but it was worth every ounce of fuel we burned.

Stability. This is primarily based on the Center of Gravity. This Beast was balanced at 63mm from the leading edge of the bottom wing as recommended in the manual.  I found it to be perfect for my style of flying and, it also seemed perfect for David and his 3D demonstration.

Tracking. Straight as an arrow! This is the first biplane that I have flown that had very little coupling issues. A minimal amount of rudder to elevator mix was used for professional knife edge passes.

Aerobatics. Anything you can think of and then some. This is a very agile biplane indeed and will give monoplane guys a run for their money. Loops are effortless and there’s hardly any need for heading correction when you pull it up into the vertical. Snaps are crisp and like right now. Inverted flight is very easy and almost no forward stick is required to maintain a straight line. Knife-edge is very pleasing and the Beast just sets there and goes on for as long as you like. All in all, the Beast can do anything you want it too and it will make you look good while doing it.

Glide and Stall Performance. Typically biplanes and glide performance are not usually considered good partners. Not with the Beast! With a wing loading of 24.4 ounces, the Beast glides more like a slippery Cessna.  Stalls are straight forward and very predictable with little to no wing drop at all.

Although the manual offers computer mix setups as pictured directly from Quique’s radio, you may want to consider flying your airplane first without any pre-programmed mixes as every airplane will be slightly different.  Once comfortable with your airplane, JR 12X owners can then quickly download Quique’s own personal radio programming for the Beast at hangar-9.com. 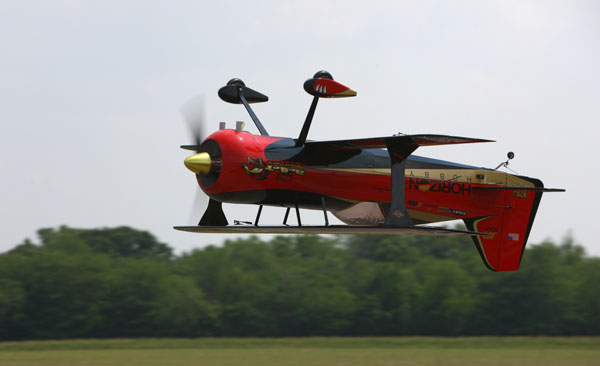 Set this flight mode for takeoff and landings as the precision rate may not have enough elevator for adverse condition/slow speed landings.

This flight mode is for precision flying including snaps.

This flight mode is also for precision flying but used for stall turns, rolling circle or maneuvers that require more rudder.

This flight mode is mainly for 3D flying.

Note: Flight mode a
nd expos are listed as reference only. Do not hesitate to adjust to

For a Video Walk-around of the Beast, Click here: http://blogs-modelairplanenews.com/media/446/Video_Walk-Around_Hangar_9_100cc_Beast/