Several years ago, I was fortunate enough to see Quique Somenzini compete at the Tournament of Champions in Las Vegas and watched in total amazement as he put his model through outrageous maneuvers. Now the champion pilot has begun designing aircraft, and his latest is the Carbon-Z Scimitar. It’s a red-hot fantasy-scale, twin-rudder, delta wing electric with a revolutionary single axis, vectored-thrust propeller system that gives the Scimitar an unheard of level of maneuverability. 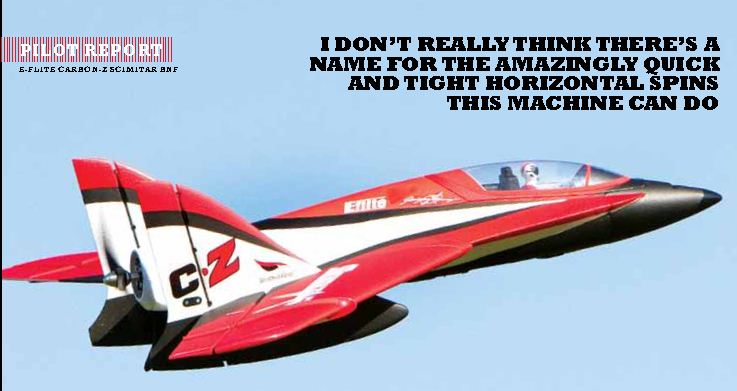 Unique Features
One of the most unique features of the Carbon-Z Scimitar is the technology incorporated into its airframe; namely, Carbon-Z.
This patent-pending technology combines a blend of carbon, plywood and Z-foam and a new design philosophy in which the wings, for example, are no longer made of solid foam but are molded in a built-up format with ribs and include embedded plywood spars and carbon rods. This gives a lightweight structure with rigidity and strength previously unattainable with solid foam.

IN THE AIR
The first time you look at the sleek Scimitar, you’ll say to yourself, “Man, this is a high-performance airplane!” The same goes for everyone who sees it at the flying field. It just looks fast sitting on the ground! When everyone notices the retractable landing gear, the deal is sealed and anyone who flies this “spaceship” has to be a hotshot pilot. Well, yes and no. Yes, the airplane is sleek and it is capable of high-speed flight and has awesome aerobatic agility, but no, you don’t have to be an expert pilot to enjoy the Scimitar. Being a swept-wing tailless delta-wing design, like all other deltas, the Scimitar has a very wide speed range and you can really slow it down when it comes time for landing. No, it isn’t intended for beginners or low-time pilots, but once you get over the intimidation factor, you’re going to love flying this sleek speedster.

With the Scimitar trimmed out for straight and level flight at about 2/3 power, it required only about four or five clicks of up-elevator. Using the recommended expo rates gives the Scimitar a nice comfortable feel while at full stick deflections, you can really wind the model up into tight maneuvers. An important thing to remember is to do a good job tightening the axles to the landing gear struts. Be sure to file a flat on the wire so your wheels don’t pivot around on landings on rough grass. On my first landing, the nose wheel went 90 degrees and this made the Scimitar stop straight ahead in only about 10 feet! It looked like a perfect carrier landing snagging wire number 3. With the axles tightened down properly, the model will land like a dream—touch-and-gos and all!

Don’t miss the the exclusive review by Jim Onorato in the March issue of Electric Flight, on sale January 3!