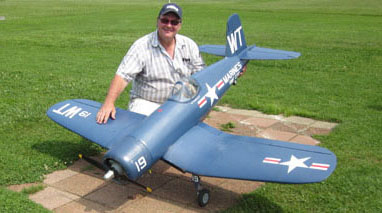 For the US Navy and Marine Corps aviators in the South Pacific during World War 2, the F4U Corsair was an impressive fighter that could get the job done! Though faster than the Grumman F6F Hellcat, it was to replace, the Corsair was more demanding to land on carriers. The fighter was also used by the USMC VMF-214 “Black Sheep” Squadron, commanded by Major “Pappy” Boyington and by the war’s end, Corsair pilots had shot down 2,140 enemy aircraft and reported only 189 losses, for a final kill ratio of over 11:1.

The Corsair also flew during the Korean War in close ground support and attack roles but when the MiG-15 jet showed up the Corsair quickly became obsolete. It was eventually replaced by the Grumman F9F Panther jet. With such an impressive military career, it’s little wonder that the Corsair remains so popular with RC pilots.

Top Flite produced a number of Corsair kits several years ago including the Gold Edition giant scale version and so an ARF version was a natural. Designed for 50cc gas engines, this new giant scale Corsair ARF was first shown off at the Toledo hobby expo and I just knew I’d need one for my RC hangar. With its great looks and impressive flight performance, this giant scale ARF is going to be just as popular as its predecessors were.

The ARF Corsair is a fairly uncomplicated build but it does take time to do it all correctly. It has well illustrated instructions and comes with all its major sub-assemblies factory built, hinged and covered with matt-finish Insignia Blue Monokote. The parts include the fuselage, wing center section, the outer wing panels and the tail surfaces. The vertical fin comes built as part of the fuselage and the multi-panel flaps have interlocking tabs so one servo can drive all three flap sections.

The wing center section is extremely strong and reinforced with an aluminum spar plate that includes the extended mount blades for the outer panels to slide onto.

The wing comes ready for Robart retracts to bolt into place and there are no accommodations for fixed gear. Wheel well liners come glued into place as is the fiberglass belly pan. The Corsair includes many formed scale parts, painted to match, including the canopy, engine cowling, tail cone and wheel well doors. There’s also a dummy radial engine kit and a detailed cockpit kit included.

All the hardware and additional laser-cut wood parts are nicely packaged to help make assembly go quickly. Fuel tank, throttle linkages and all the other hardware items needed to complete the plane are included. The scale 4.5-inch wheels and aluminum bullet-nose spinner are also supplied. I used a DLE 55cc gasoline engine for power, and it is equipped with electronic ignition and aluminum mounting standoffs. I chose a Xoar WW2 23×8 propeller and it works great with the engine.

For control, I used the Futaba 8FG Super transmitter with a Futaba R2008SB receiver. To power both the receiver and the Robart electric retracts, I used 2100mAh LiFE 6.6V battery packs (one for each system). I used Futaba S3305 and S3004 servos as suggested in the instructions and I installed a Hobbico HydriMax 5-cell Ni-MH 6V 2000mAh pack to power the ignition system.

The horizontal stabilizer is both bolted and glued in place with epoxy. Solid wire 4-40 pushrods are connected internally to the elevator halves and the rudder. I used Zap CA glue and 15-minute Z-Poxy throughout the construction.

Nothing looks and flies like a giant scale warbird. The new Top Flite F4U Corsair with its 86.5 inch wingspan performs just like the original Gold Edition kit while saving a ton of assembly time. Everything goes together nicely and the craftsmanship and quality of the wood and hardware are just great! If you want to strap on a big South Pacific bent-wing warbird and splash so dastardly Zeros, then this is the plane for you!

During the Corsair build, I posted a 12-part workshop build-along series to show all the assembly details on the modelairplanenews.com website. Before the first flight I balanced the model with a Great Planes “CG Machine Balancer” and I ended up needing only about 16 ounces ballast fixed to a plywood plate attached to the engine standoffs. Using a gas fuel mix of 40:1 the DLE-55 fired right up and the carburetor needed only minor tweaking of the low end needle. I used a 2-line fuel tank setup with a T-fitting for filling and draining the tank. The test flight was flown by Kevin Siemonsen at the Central CT RC Club flying field.

Stability: Just like the original giant Corsair, this ARF is neutrally stable and not at all twitchy. It has a solid feel and responds well to control inputs at all flight speeds. Tracking: Rudder use is key. Aileron and rudder coordinated during turns make them smooth and predictable. On the ground, with a smooth application of throttle, there’s plenty of rudder response to keep the takeoff roll on course.

Aerobatics: This Corsair is a real dogfighter and can best be described as nimble. You can do all the same combat maneuvers the full-size Corsair did and it will make you look good while doing them. Plenty of power means good vertical performance so loops, chandelles, and climbing Immelmann turns are easily done. On the way down however, like on the back side of a loop or while exiting a Split-S, ease back a bit on throttle to lessen stress on the plane. Rolls are smooth and very axial.

Glide and Stall Performance: With the nose into the wind and wings level, the stall break is straight ahead. The Corsair has a modest wing loading so landings are pretty undemanding. The flaps are effective and help a lot to shorten the approach. Lowering the flaps on the test plane, did not make the nose rise or tuck noticeably and no elevator retrim was necessary. The glide performance is as you would expect for a large warbird, but should you lose the engine, keep the nose down and don’t lower the flaps. Also wait as long as you can before dropping the gear; (it will take about 8 seconds!)

Pilot Debriefing: Fly with a plan. Don’t just takeoff and then try to figure out what to do after you’re airborne. Make each flight a learning experience. Trim out the plane for straight and level flight and then learn how it reacts. Cycle the landing gear and check how the flaps make the plane respond. Operate the plane at both high speed and at lower power settings to see how it behaves. Before landing, make a few low level passes then setup a proper traffic pattern to bring it in. Think smooth and be smooth on the controls.

The new Corsair ARF is designed for Robart Mfg.’s retractable landing gear to bolt right into place. The 1/6-Scale 100-degree rotating main gear (148E) and the double-fork tailwheel (160WCE) are exactly the same as the usual pneumatic retracts with the exception of the electric drive actuators that replace the air cylinders. The standard air tank and servo operated control valve and filler fitting as well as all the air line plumbing are all replaced with a single control box and a few extended servo leads. Everything else is the same.

What’s cool about the electric gear is that you can adjust timing delay and direction with simple jumpers, and the speed of the gear is controlled by the voltage of your battery pack. Higher voltage means faster cycle times. The system requires 4.8 to 9V and can be powered by your receiver battery pack or with an auxiliary pack. With a 6.6V Li-FE pack the retract time is about 8 seconds to up and locked. Another great feature is its “Amp Out” circuitry. This causes the gear to stop moving should something like a gear door get in the way while the gear are cycling. If this occurs, the gear stops and all you do is flip the retract switch again and the gear extends normally.

You don’t have to inspect a Corsair closely to know that it is a very complex airplane. The characteristics that make it so identifiable—among them, its inverted “gull” wing—must have kept manufacturing people up nights trying to figure out how to build them fast enough to meet the requirements of the War. From its compound curves to sophisticated forgings, its massive castings and intricate machine work, the Corsair was much more difficult to build than its brother-in-arms, the Grumman Hellcat. But when all of its parts had been screwed together and that big R-2800 Pratt & Whitney was kicked into life, it was nothing short of astounding. It could dish it out and it could take it, and many Marine and USN aviators owe their lives to the Corsair’s being able to bring them home even when huge chunks of it had been blown off. Although the Corsair had difficulty on carriers, shore-based Marine pilots used it to good advantage as they rose out of the muck on tiny jungle runways to remind the enemy why it wasn’t smart to sucker-punch America. With the Corsair’s help, Pearl Harbor was avenged many times over.

During the 13 years that separated the XF4U-1’s first flight from the production of the final one, the world of the fighter changed drastically. By the end of WW II, it was obvious that propeller-driven fighters were no longer needed. Jets had seen to that. Still, the Corsair stayed in production for another seven and a half years. That fact alone tells us how the Navy and Marines felt about their bent-wing beauty. The Corsair was born in the biplane’s twilight era, but it soldiered on to share airspace with Century Series jets. Those who flew it loved it, but those who faced it loathed it. And those are probably the best words that can be said about any fighting machine. — Budd Davisson