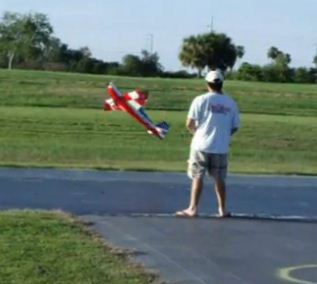 Here’s today’s Edge video. I’m really starting to get comfortable with this plane… but it’s hard not to because it’s so stable. The camera quality isn’t the best on this flight, however, but it came out OK. Hope you like the Beatles!
So now that the first few flights on the Edge are done we took it out to the flying field today to get some flight video… and that’s just what we did. I experimented with removing the SFG’s and I kind of like it. Here are my reasons for experimentation and my findings:

First off, the Motrolfly 2820-750 with that 14×7 prop lacked the forward speed I was looking for. Since the SFG’s are so huge, I figured they were creating drag whenever the tail wiggled and waggled adding up to un-needed drag that slowed the airplane down. Also, I was curious to see how the rudder authority decreased without them. I mean, the SFG’s are so huge, they had to be doing a lot of work… no? And finally, I heard on one of the online forums that one person took off his SFG’s and wing rock decreased… which is hard to believe when you think of the aerodynamics aspect of things, and also the fact that there is no wing rock when the SFG’s are on… so technically there can’t be less than nothing, right?

So the first flight I took off, went vertical, and decided to do some vertical point rolls. The first thing I noticed was that it was rocketing upwards faster than it was with the SFG’s installed, so that was step one in proving my drag theory. Also, when I gave the aileron inputs for the vertical point rolls, they seemed much more crisp, clean, and precise than with the SFG’s on. Then I nosed over to pick up speed and decided to do a high speed racetrack pattern around the field to continue to experiment with the forward speed. I found that the speed did significantly increase making part-one of my experiment a success.

Next, I decided to try out some high speed Knife Edge (KE) passes. So I built up a head of steam at full throttle, put it on its edge (no pun intended) and gave my normal rudder input. Of course, without the SFG’s and with an almost un-noticeable amount of rudder input, it started to sink. Not wanting to try anything weird as it sank towards the ground in the hot, humid, and thin air of Florida in mid July, I leveled the wings and flew out to the East. Next time around I gave more rudder input and managed to keep the aircraft from sinking… and I still had less than half rudder input applied. Apparently, the SFG’s just add so much side area and lift when on KE, that it makes for a nearly un-realistically easy flying airplane… not particularly a bad thing, however. But even with the SFG’s off, the Edge still performed Knife Edges almost flawlessly. The only flaw is when a lot of rudder is given, the aileron coupling does some weird stuff… but nothing a few percent of rudder to aileron mix can’t fix.

Last on the list was the harrier test. This was to test two things: One, to prove or disprove the phenomena brought up on the forum. Two, to see if removing the SFG’s will increase the forward speed of the aircraft to keep up with the pace of the music I intend to use in my videos.

So I brought it down from high altitude on the East side of the runway in an elevator and gently transitioned into a harrier. First thing I noticed was that there was a slight hint of wing rock; this immediately countering the event brought up on the forum. This was as I expected because the aerodynamics of it didn’t add up logically, even in theory. As I continued to harrier around, I found that wing rock was not a constant problem, but mostly came into play when changing directions or decent rates (like during an elevator to harrier transition).

Last but not least was the harrier speed test. Upon pulling up to my 45 degree AOA ideal for my harriers, I almost immediately noticed that the plane was moving faster than with the SFG’s installed. I was pleased with this outcome.

In conclusion, I am pleased with the flight performance of the Edge without the SFG’s. I will continue to experiment with KE mixing and maybe some alternative SFG designs… but for now, it flies great!