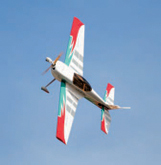 At the 1994 Tournament of Champions in Las Vegas, NV, I saw an extreme slip to landing performed by David Von Linsowe’s giant-scale Extra 300S during his freestyle program—it was choreographed to music with the engine off! Ever since that flight, this maneuver has caught my eye. You don’t often see an aircraft slip in the yaw axis while the flight path is parallel with the runway during landing!

However, executing the extreme side slip to landing requires a pilot to be comfortable with using rudder as well as cross-controlling rudder and aileron input. It is important to understand the balance of these two inputs, as all airplanes respond to control inputs in a different manner. If too much rudder and/or aileron are used to perform the extreme slip, the pilot may become overwhelmed when his aircraft performs a variation of the negative snap roll. After all, the commands are similar!

To perform this maneuver, you’ll want an aerobat that excels at both precise and extreme maneuvers. It should have strong rudder authority (side-force generators, which increase the side area of the model and increase the airplane’s rudder authority, definitely help!).

Like all landings, this one is no different. You should perform a downwind leg, turn on to base, and turn on to final so the aircraft is traveling into the wind. At that point, line up with the runway. To initiate the slip, a slight amount of aileron will bank the aircraft about 15 degrees in roll, and opposite rudder input will cause the aircraft to slip in the yaw axis.

As soon as the slip has begun, you will need to balance aileron and rudder to keep a constant slip in motion. In addition, use elevator and throttle to keep a constant descent and to bring the aircraft to a three-point landing. Before the aircraft touches the ground, though, release rudder and aileron inputs to stop the slip and to straighten out. Stopping the slip before the flare is key, so both main wheels touch down at the same time. Done properly, the airplane will track straight down the runway and the side load on the landing gear will be reduced.

STEP 1. Begin by lining the aircraft up with the runway, traveling into the wind. In this example, the landing will be from right to left, and the aircraft will be rolled to the left so that the top of the model is visible during the approach. Apply a small amount of left aileron to bank the wings of the aircraft and follow that input with right rudder to establish a slip angle.

STEP 3. Keep the nose of the aircraft down slightly and remember to balance rudder and aileron input accordingly. Using too much aileron and rudder input at the same time can result in a negative snap roll variant! Keep the bank angle limited, but add rudder input as needed to keep a graceful slip.

STEP 4. As the airplane approaches the runway, decrease the slip angle by releasing rudder input and correct the bank angle of the wings with the ailerons. Add power as needed to keep the speed of the aircraft up and perform a flare. The best manner to approach this portion of the maneuver is to wait until the last moment before touchdown.

These are the basic control inputs that are needed in performing this exhilarating maneuver. However, this type of landing is not only a crowd-pleaser; it’s also beneficial during an emergency situation like a motor failure. Occasionally, a motor will fail forcing the pilot to land downwind as the airplane may not be high enough to actually make a lap and turn into the wind. At that point, the pilot should line the aircraft up with the runway and perform a side slip to drop altitude and airspeed if the airplane is traveling faster than desired. As the aircraft approaches the runway, the pilot can level the aircraft out, release rudder and aileron and perform a flare for the perfect emergency approach.