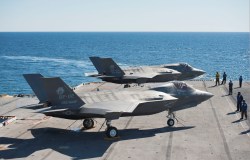 I found this to be rather cool, enjoy
This video link is fresh (for the public).  It was made just six weeks ago in the Atlantic, just off Newport News (Hampton Roads), Virginia … These are the latest sea trials the F-35B on the USS Wasp. They were very successful, with 74 VL’s (Vertical Launch) and STO’s (short take offs) in a three week period.
The media and the program critics had predicted that we would burn holes in the deck and wash sailors overboard. Neither of which happened. You will notice a sailor standing on the bow of the ship as the jet rotates.  That was an intentional part of the sea trials.
No catapult… No hook….It’s a new world out here!
The shape and scope of warfare worldwide just changed.