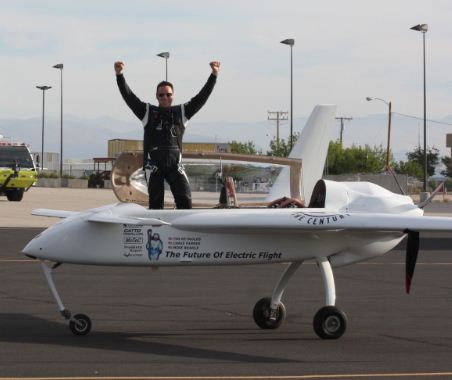 On July 18th, Chip Yates flew the all-electric Flight of the Century for the first time. The 16-minute flight allowed the pilot to get comfortable with the Long-EZ controls as well as the electric system. The Flight of the Century team took a Burt Rutan Long-EZ (N158TG) and converted it to an all-electric flying test bed aircraft to continue development of their patent-pending Infinite Range Electric Flight (IREF) technology.  They write,  “As a second mission, the aircraft is also being equipped to attempt fastest top speed for a manned electric aircraft, and highest altitude for a manned electric aircraft world records in the summer of 2012.  Our plane is referred to as a Long-ESA, for ‘Electric Speed & Altitude’ in reference to the world record attempts it will make this year, while honoring the incredible genius of Burt Rutan’s many designs, including the iconic ‘Long-EZ.’ ”  UPDATE: on July 19, the Long-ESA achieved a speed of 202.6mph during its second test flight, breaking the 200mph barrier for electric aircraft.

Here’s a video of the Long-ESA breaking the electric speed record!

Read more about the aircraft battery system and the team’s efforts by clicking here.