Well yesterday my dad and I went out to the field and flew our Twisted Hobbys Xtra Slick. That day, the slick endured some abuse. The first one was a little exciting. Here’s the story…

My dad and I were at the field, and we had our chargers set up on the table under the shelter. The tables are mounted to the sides of the sun shelter, and as the sun moves across the sky, some tables go from the shade to the sun and some go from the sun to the shade. My dad moved the chargers and stuff over to a shaded table, plugged everything back in, turned everything on, and walked away. Soon enough, we all heard a loud POP! WHOOOSH!!! and noticed a few feet of flame shooting from a 2S on the table!

We all ran over like a bunch of firemen in a 3 stooges movie. I grabbed the radio and moved it away from the flame as my dad unplugged the charger and disconnected the banana plugs from the charger and proceeded to hold the flaming lipo at arms length as it dangled from the wires.

My friend Chris, his kids, and myself obeyed his command to “Stand back!” as he set the flaming battery on the ground. At this point, it looked like a burnt marshmellow… charred black and on fire! I then snapped the below photo with my phone before it burnt out.

Now imagine if this was a 5S 5000mAh. This little 2S 450mAh blew up twice as each cell exploded individually and shot 2 feet of flame which left a black mark on the table, melted the leads right off the battery, and succeeded at scaring the you-know-what out of everybody.

So… what caused this? Well, when my dad moved the chargers, he forgot to reset them. When the charger we have is turned on, it goes to the “charge” setting. We charge all of out batteries on the “balance” setting. The “charge” setting is used for several old 3S lipos that will spend 120minutes “balancing”… so I will just flip it over to the charge setting after they reach 12.6volts, and they’ll sit there for 23 seconds, then be done. But I digress…

Remember, these are 2S batteries… charging on a 3S setting. In short, it was trying to force 12.6 volts into an 8.4 volt battery which resulted in a spectacular light show! Also, since it was on the “charge” setting, it didn’t stop and sound an alarm like it would have if it was on “balance” when it realized it was only a 2S battery.

This is a lesson for all of us. Check those batteries. Double check your charger settings. And triple check the cell count and make sure the “cells counted” and “cells programmed” are the same before pushing the final GO button on your charger.

If this was a 5S 5000 at the house, this could be a very sad story of how I’m using the library’s computer to post this. Thankfully, it was only a 2S at the field in a safe and open environment. LiPo’s are dangerous if mistreated or mishandled… otherwise they’re pretty safe.

P.S. Oh… and for the second event… my dad ripped the stab off while trying to harrier through some posts. Way to go dad! 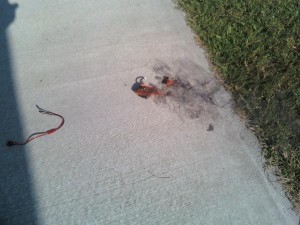 Only charge 2S batteries on a 2S setting... Do not attempt to charge on a 3S or other setting or something like this will be produced