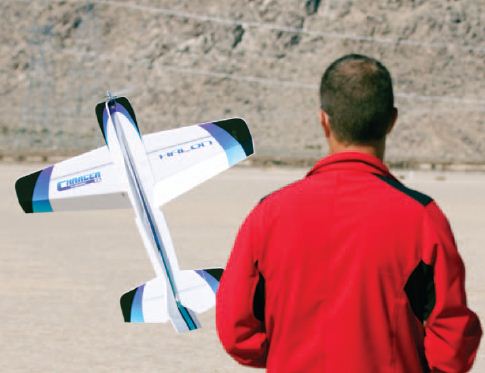 A series of flight checks are required to program your radio for 3D flying. These flights should not be viewed as practice flights, but a time to evaluate your plane’s tendencies and fine-tune your radio setup. It’s therefore important to conduct your initial flight checks in calm conditions to make it easier to detect your plane’s tendencies and the appropriate mixes to use.
The first flight should take place on low rates and you should trim the airplane for slow flight at approximately half throttle. Note that if you’re flying a flat-plate-airfoil foamie, you probably won’t be able to find an elevator trim setting that works consistently, so the objective is to get it close and make elevator corrections the rest of the time. 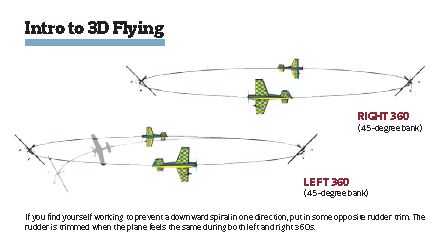 Once the aileron and elevator have been trimmed, check the rudder trim by performing left and right 360-degree circles while maintaining a 45-degree bank angle and a constant altitude. If the nose wants to drop more in one direction, put in a little opposite rudder trim. The rudder is trimmed when both left and right 360s “feel” the same and require the same amount of up-elevator to hold a constant altitude. Once the plane is fully trimmed, start evaluating the low-rate control responses during basic loops and both left and right rolls. The manufacturer’s recommended control throws and expo percentages are usually good starting points, but to fly your best, you must adjust each control to suit your immediate comfort/skill level. Therefore, as soon as you deem a control to be too slow or sensitive, land, and adjust the dual-rate percentage. Remember that the numbers on the screen are not important; only how the airplane feels to you matters. Also, try to be sensitive to whether the controls are equally responsive in both directions and keep fine-tuning the controls until you are comfortable with your plane’s handling and it is equally responsive left and right and up and down.
Next, get some altitude and switch to high rates. If any control is too sensitive, switch to low rates, land, and increase the expo percentage (on high rate) for that control. The goal is to adjust the expo percentages to enable you to fly with the “feel” of normal rates when your control inputs are less than half, but then rapidly ramp up beyond that. Don’t hesitate to reduce the expo on a control if it feels sluggish. Flying with too much expo causes a lag or sluggish control response that will allow deviations to grow larger before your corrections take effect. (Too much expo will cause you to feel disconnected to the plane.) The objective is to use the least amount of expo and still feel comfortable. Put another way, the proper use of expo is to make a 3D airplane comfortably controllable on high rates, not to make it docile!
Remember, dedicated 3D airplanes with large control surfaces are designed to fly at slower speeds. The tradeoff is that if a dedicated 3D airplane is flown too fast, almost no amount of expo will prevent the controls from becoming too sensitive on high rates. It’s important to keep track of your speed and avoid flying too fast when evaluating your plane’s control responses.