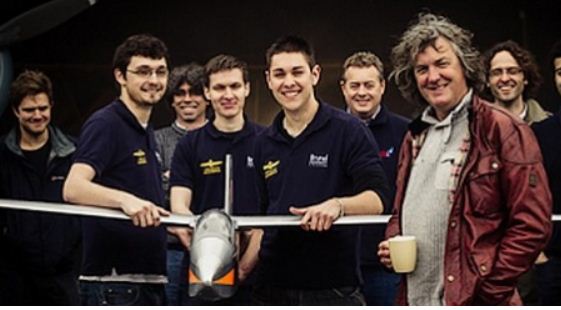 James May of “Top Gear” fame has a series of shows called Toy Stories, and the latest edition features an RC plane that breaks a UK distance record! Here’s what the BBC has to say about the show, which you can watch in the video below.

“In this epic Toy Stories Christmas special, James gets to the heart of the nation’s childhood love affair with the model plane and sets out to achieve what seems an impossible dream: the first cross-channel flight ever achieved by an engineless, homemade supersized toy. If it survives the perilous 22 mile journey, James’s classic toy glider, lovingly built from over 1,000 pieces of balsa, will smash the British distance record.

James’s mission is dedicated to making the dream of flight come true for the generations of children who, like James himself, slaved for hours over balsa and glue only to see their fragile and much loved planes smash tragically on to the unyielding concrete of reality.

During his quest James turns Indiana Jones to unearth surprising new evidence that identifies children as the true pioneers of flight and wrestles with an underperforming glider that threatens to barely leave the ground. And what starts as a simple yet noble aim, takes James in many unexpected directions – to a mysterious and barely inhabited island, to helicopters lost in the fog and missing speedboats and what can only be described as the world’s first flying coffin for gliders.

Throughout James is beset by a series of dramatic problems requiring inspired solutions, near disaster and breakthrough which culminate in a thrilling and visually stunning last throw of the dice.

Underpinned throughout by James’s own infectious passion for flight, a passion he’s had since he first put glue to balsa as a ten year old, Flight Club is an epic journey into the unexpected.”