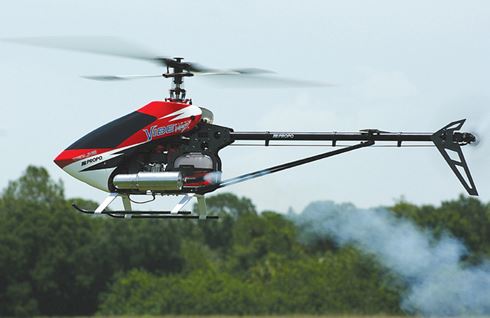 Although helicopters have spinning rotor blades, they are no more dangerous than airplanes or any other form of RC. However, there are lessons to be learned that we can apply to our flying to improve safety in general. As an example, I heard about a pilot who was flying a helicopter in the backyard after some setup changes, when it went out of control and he found himself pinned between his house and a line of trees with nowhere to go. Whether it was an errant control input or some malfunction in the helicopter doesn’t really matter. The first point to be learned is that helicopters can go out of control, for any number of reasons. No matter how good a pilot we think we are, there will always be the occasional “brain lock” and bad command we didn’t plan on. It could also be some malfunction in the helicopter itself. The battery could go bad, or the switch or servo could fail, or any other problem that may arise. So, the real point is to never completely trust your helicopter, and always have a plan for the unexpected. It’s also a good idea to fly in an open field with plenty of room to maneuver, instead of near your house or in a confined area. I think the real issue is to always make sure you have an escape route if needed. However, there is more to safe flying, such as having constant awareness of what you are doing and seeing if there is a safer way to fly while still enjoying this great hobby of ours. Let’s take a look at a few examples that could make your flying just a little bit safer for you and your helicopter.