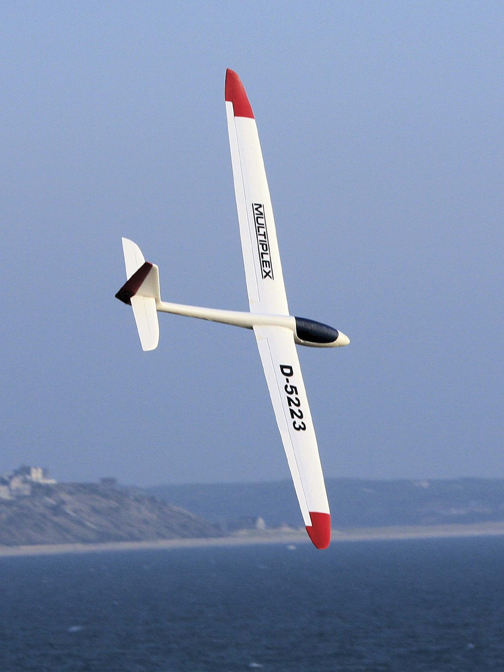 Dave Garwood
Slope flying for electric pilots
Have you ever tried flying an electric-powered model in slope lift? Slope flying has been compared to motorcycle riding, with the wind blowing your hair back, big easy view of the open sky, and bugs on your teeth from the huge grin on your face. You are already an electric RC pilot, and maybe you’ve thought about flying RC sailplanes. Chances are you’ve seen birds fly in slope lift and maybe seen RC gliders fly in slope lift; so you know it works, but at the same time, you wondered when and where you might be able to launch a model and fly in slope lift yourself. While there are some well-known slope flying sites and some thoroughly understood wind patterns that support RC flying at those sites, there are many more less-well-known and perhaps even undiscovered flying sites waiting for someone to throw a model from-perhaps an e-flight model.
HOW IT WORKS
Gliders in flight are always descending relative to the parcel of air they are flying in. A sailplane trades altitude for speed by descending relative to its surrounding air. To go faster with a glider, push the nose down. To increase control surface response to get out of a jam, push the nose down. In a glider, down-elevator is your friend. With all this down-elevator going on, you have to wonder how a sailplane stays up for hours or even increases its altitude until it becomes a speck in the sky.
To have sufficient lift to fly without a motor, the glider must be in rising air, and we use two sources of rising air, thermal lift and slope lift. Thermal lift is created by the sun heating the earth’s surface unevenly, resulting in the air in contact with the ground warming more in some places than others. Eventually a bubble of warm air breaks loose and rises, taking with it birds, bits of vegetation fuzz, paper and trash, and yes, our RC sailplanes. When you observe a hawk, an eagle, or a vulture circling without flapping and rising, that bird is making use of thermal lift. We can do that with our model gliders, but this article is about slope lift, sometimes called ridge lift.
In slope lift, wind blowing into a hill or mountain is forced upwards at the face of the slope, and the upward-moving air stream creates lift for birds, full-size sailplanes and our RC models. When you see a gull cruising from horizon to horizon without flapping, chances are its in ridge lift, and its out in front of a dune, or a hill, or a row of buildings, and the wind is blowing into the hill. Full-size gliders can fly for hundreds of miles in ridge lift along the Appalachian Mountains. More than 100 RC glider pilots have flown a flight longer than eight hours in slope lift, part of the requirements for the League of Silent Flight Level V achievement award (silentflight.org). 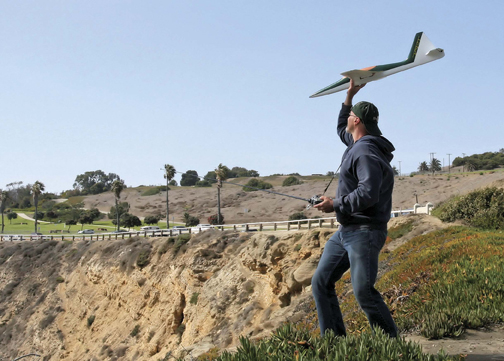 Reed Sherman of San Francisco prepares to launch a JART sailplane at the Point Fermin slope flying site in San Pedro, CA. Note the ruggedness of the cliff face in the surrounding cove.
AN E-PILOT WHO VOLUNTEERS TO GO FIRST BECOMES WHAT SLOPE SOARING PILOTS CALL THE “WIND DUMMY.”
Please note that a powered model may not be entirely welcome at a slope flying site; as motors are seen by many as shattering the silence of silent flight, power planes are seen by some as diminishing the majesty of soaring flight, and motorized models seen by at least a few as “cheating” at RC gliders. That caution given, here are four cases where unsheathing a motor glider makes a lot more sense than standing on top of the hill wondering if there’s enough lift to fly, and can reduce risk to a model launched out in exploratory mode.
UNCERTAIN LIFT
Slope lift varies with wind speed and wind direction. Generally, higher wind speeds generate more lift, but wind speeds can be too high. Wind “straight in” or more perpendicular to the ridge line generates better lift. Weather systems affect winds, as do daily heating patterns, and it’s common for lift to start small early and get better as the day goes on. The trick is to know when there’s enough steady lift to launch and fly gliders. An e-pilot who volunteers to go first becomes what slope soaring pilots call the “wind dummy.” As he ventures forth boldly to test the lift, all watching can see the result. If not enough lift is present, the e-pilot can power up and climb back to the launch point, and no “pure” gliders are lost down the hill.
NEW HILL
Decision time at Francis Peak. Morning lift-checking at Francis Peak, a mile above the Great Salt Lake and the city of Farmington. Those experienced at the flying site and launching familiar, well-trimmed sailplanes might launch in the early-morning light lift conditions. Others with less slope experience might prefer to launch a motor glider.
Plenty of hills look flyable, but some produce a whole lot better lift than others for the same wind conditions. This may be the hill shape itself, the ground cover and turbulence-makers out in front of the hill. In the case of a newly discovered but unproven hill, an electric flier can serve as an explorer and a tester, as in the wind dummy example above, and he can lead the way for the “pure” gliders by discovering if the hill flies as good as it looks. Many experienced slope pilots would agree that new hill exploration is a superb time to launch a motor glider.
GNARLY HILL
There are hills that have plenty of lift, have good launching and landing areas on top, but have very tough or impossible terrain or ground cover out front. If a plane goes down, it is essentially lost. When my son Lou first flew at Petersburg pass on the New York and Massachusetts border, he described the chances of recovery from the heavily wooded mountainside out front with a Jack Handey quote: “If you drop your car keys in a pool of molten lava, let ’em go, because, man, they’re gone.” Flying a motor glider reduces the chances that a slope soaring plane may go down in unrecoverable territory.
TRAVELING PILOT
Some slope pilots are wanderers. Just because you wander doesn’t mean you don’t know where you are going. The wandering RC pilot may arrive at a slope site with very light wind, or cross-wind, or even no wind. But he’ll still be able to enjoy a flight if he’s brought a model with a propeller on it. Sometimes a motor glider can save a flying day for a pilot who is traveling. Are there slopes where you’re headed? Check out the nationwide slope site locator at slopeflyer.com.
SLOPE ETIQUETTE
You know from the discussion above that there are times when electric planes are not warmly welcomed by soaring pilots. The thing to do is to work slowly and carefully, and ask the other pilots before you fire up a motor if anyone minds having a propeller in the midst of silent flyers. Start with quiet-running models, and save the screamers for the race course.
Chances are that with the right approach, the e-pilot will be given the go-ahead. In the four cases discussed above, chances are that he will be warmly welcomed into the group. Then it is but a short hop for the e-pilot to try flying pure gliders and begin to understand what all that fun is about. The e-pilot who flies sailplanes as well has many options and much fun in his future. 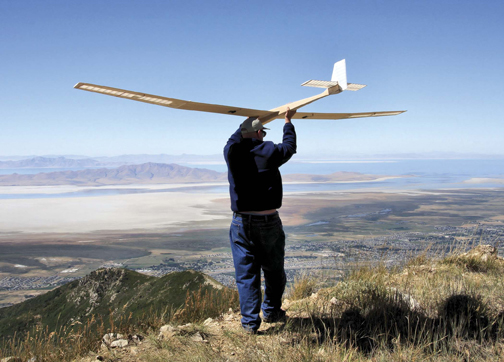