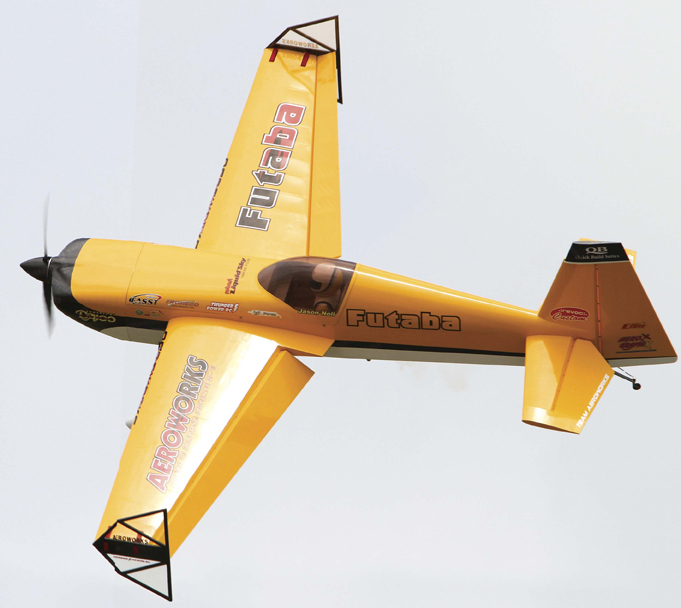 Inside and outside snap rolls can add great excitement to your flying while opening up a whole new world of maneuver possibilities. Outside, or “negative,” snap rolls are accomplished by applying full (normal rate) down-elevator while at the same time cross-controlling the rudder and aileron. How does this work? The ailerons produce the same direction of rotation whether the snap is inside or outside; however, during an outside snap, the rudder causes the tail to rotate in the opposite direction in which the rudder is applied. Because of this, the rudder must be input opposite the aileron to achieve the same rotation as the aileron during an outside snap roll. 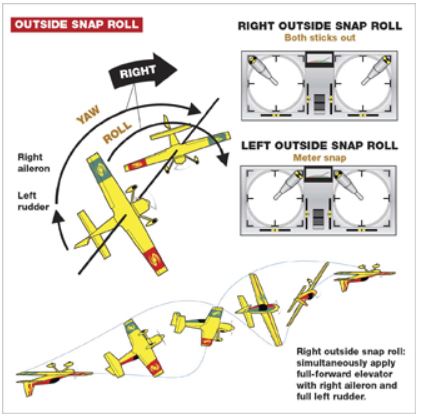 Here’s an example. During a right out-side snap roll, full-forward elevator is used to cause the wing to exceed the plane’s critical (negative) angle of attack and stall. At the same time, aileron and rudder rotate the airplane clockwise to the right. A close examination will show that left rudder actually moves the tail clockwise during a right outside snap. Just remember to cross-control the aileron and rudder inputs when performing an outside snap roll.

The direction in which you apply aileron determines whether it is a left or right snap. During initial training when you’re remembering the stick positions for each, it helps to think of a left outside snap as a “meter snap,” with both sticks applied toward the traditional top center location of the transmitter’s battery meter. A right outside snap is an “outside corners” snap. Note that if your model is greatly overpowered, you may want to snap at a lower throttle setting, especially when the airplane is descending.

Most airplanes outside snap-roll better to the right (with left rudder and help from the propeller slipstream). Many people also find that right snaps are more comfortable because their fingers don’t have to stretch as far. Stopping a snap is accomplished by simply neutralizing the controls. Keep in mind that the snap will continue a bit farther in the split second that it takes you to neutralize the controls and for the airflow to reattach to the wing. Therefore, you’ll need to start neutralizing the controls a split second before you actually want the snap to stop.

FLYING AN OUTSIDE AVALANCHE
Whereas the typical stunt pilot often seeks stimulus through taking risks and buying new equipment, the proficient aerobatic pilot energizes his flying by introducing variations and rearranging maneuver components to come up with new maneuvers. One example is adding an outside snap roll to the top of an outside loop to perform an outside avalanche.

After establishing a parallel line with the wings perfectly level, an outside avalanche is performed by pushing into an outside loop and then inputting an outside snap roll at the top of the loop. The snap is stopped with the wings perfectly level (upright), and then the plane is pushed through to complete the outside loop. At this point, students of precision aerobatics should emphasize their use of left rudder during the first half of the loop to correct any negative P-factor and prevent sideways drift prior to the snap. Keep in mind that most of the problems people experience with this maneuver are due to performing a poor loop because the pilot is thinking ahead about the snap. Consequently, the snap usually ends up magniflying the deviations that originated during the loop. On the other hand, a pilot can get away with a less than stellar snap when the loop that led up to snap was tracking truly vertical.

Snapping to an “Attitude”
Correctly stopping whole-number snap rolls (1 or 2) is obvious, however, stopping fractional snap rolls such as 1/4 requires an awareness of which attitude the plane needs to be in when the snaps are completed.

In other words, since there is little time to count fractions of snaps, you instead snap the airplane to a predetermined attitude. For example: when a 1/2 outside snap rolls are performed from an upright attitude on top of an outside loop, you must stop the snaps with the airplane inverted (setting the stage for a pull into the back side of the loop).

Another option is to perform the first half of the loop inside (pulling), execute 1/2 snaps, and push into the back side of the loop. In this version, the airplane would approach the top of the loop inverted, and the pilot would snap the airplane to the upright attitude prior to pushing to complete the loop. 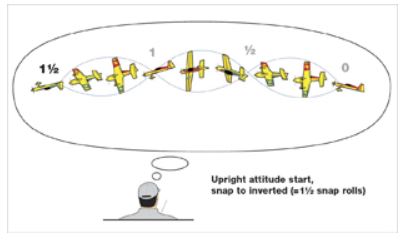 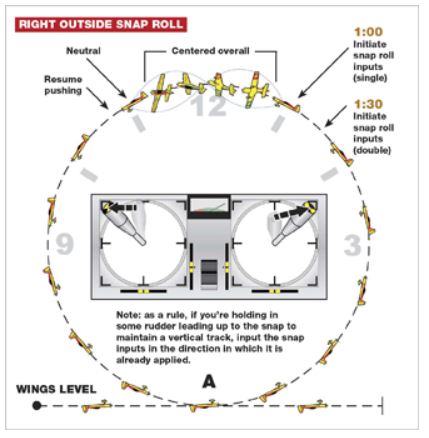 Initiate an outside loop with the wings level. As the airspeed decreases, add left rudder to correct for negative P-factor and maintain a precise vertical track during the first half of the loop.

Another awesome avalanche variant is accomplished by performing a half snap rolls at the top of a loop and, to the awe of those who are able to discern what happened, completing the loop with the airplane in a reverse attitude to what it was at the start. Note that the 1/2 snap avalanche is easier when the first half of the loop is performed to the “outside” if things get a little out of line, the corrections will be easier to make during the conventional pull-out loop finish. This maneuver is called an “outside-inside avalanche,” referring to the first and second 1/2 loops. 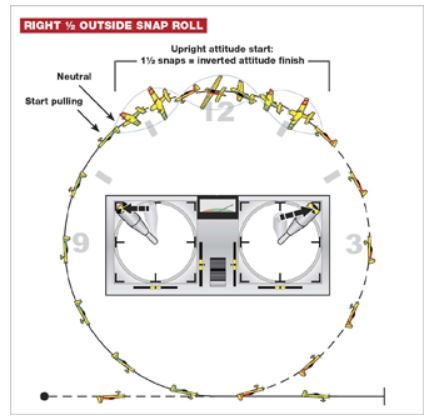 Many of the challenges that advancing aerobatic pilots experience are not due to their ability to master the finer points of the maneuvers, but are the result of focusing so much on the advanced components that they neglect the fundamentals. How comfortable you are inputting the snaps on top of loops will reflect how well you flew the first part of the loop, and whether the wings are level when entering the back side of the loop after the snaps. During your initial training, I recommend that you briefly pause at neutral after the snap to reduce the tendency to botch the snap as a result of rushing to enter the back side of the loop. No doubt, these maneuvers present some great flying challenges, but the rewards of learning them are some of the greatest that can be had in the sport. Happy flying!