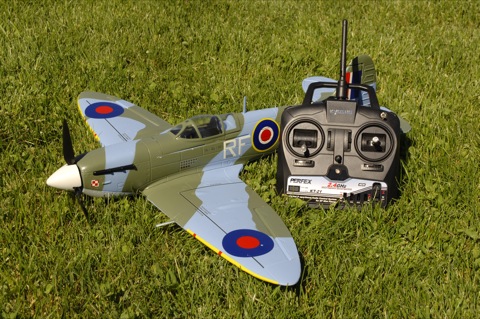 Micro warbirds are undeniably popular aircraft, and the airRium Spitfire Mk.V VE29 from Kyosho is sure to be a big hit. Its 25-inch wingspan makes its overall size is slightly larger than that of current micro offerings. And, to ensure the plane has plenty of power, Kyosho includes a 9mm 400BLS brushless motor combined with a BLS10 electronic speed control (ESC). The motor, speed control, and servos are installed and preset spot-on from the factory, so you just need to add a 2S 7.4V LiPo pack. You’ll also need to install the wings, but that’s a breeze. Simply slide an O-ring over a hook inside the fuselage, and the wings are secured for flight. Kyosho’s 4-channel Perfex KT-21 radio gives pilots precise control of the throttle, ailerons, rudder and elevator. The plane’s construction is primarily styrene foam, which has a firm, smooth surface for accurate detailing but is still pretty tough. The Spitfire is capable of aerobatics and inverted flight, so it’s intended for intermediate and seasoned pilots. Fortunately, the aiRium Spitfire is ready for flight in minutes, provided you have a charged battery pack. We couldn’t wait to get this British bird in the air so we could give you the lowdown on what matters most— it’s performance.

The aiRium Spitfire is made of smooth-surface styrene foam, and its paint and detailing is better than you’d expect to find on a bird of this size. Clean, accurate graphics and lettering give the Spitfire its signature look. Kyosho has had a long history of manufacturing high-quality RC planes, cars, and diecast, and that’s apparent in the quality of this flyer. Before your first flight, you’ll have to install the wing: Abut the leading edge of the wing against the fuselage, and then using the wire tool provided, attach an O-ring to the wing and hook it to the inside of the fuselage. Make sure the servo lead does not get pinched or caught up in the control rods when you install the wing. The detailed hatch atop the plane hides where the battery rests. Slide the 2S 7.4V LiPo forward towards the front of the fuselage. You’ll need a battery that fits snugly in the compartment (12mm high, 31mm wide, 54mm long) so it doesn’t move around during flight. With the battery forward and out of the way, it’s easy to install the magnet-secured hatch.

You won’t need to install any of the Spitfire’s electronics. The 9mm 400BLS brushless motor, 10BLS ESC, and servos arrive installed. On my test plane, the trims were set spot-on from the factory, but it’s always a good idea to check the control surfaces before your first flight. Besides installing four AA batteries in the transmitter, you’re ready to carve up the air. Kyosho includes an extra prop, tools for installing the wing, and an additional O-ring for securing the wing.

Micro aircraft have taken this hobby by storm, yet they’ve left some pilots wanting more performance. Kyosho’s aiRium Spitfire will give seasoned pilots the satisfaction they’re looking for. I wish the plane came with a battery, so that it was truly ready-to-fly, but that’s a minor shortcoming. I found that Thunder Power’s 730mAh 7.4V pack (TP730-2SJPL2) fit perfectly and offered excellent power and flight time. Not only did our test plane out-fly other micros I’ve flown, but by being more stable and precise in the air, I think it looks better, too.

Unless you can find a gigantic building with tons of room, It’s best to fly the aiRium Spitfire outdoors in a park. Since it’s relatively small, the plane is at home in medium-size grassy areas and can be flown by more experienced pilots on a baseball diamond. For landing, grass surfaces are ideal since the Spitfire touches down on its belly. If you want to land on rougher surfaces, you’ll want to find ways to protect the fuselage and wings.

Getting the Spitfire in the air is fairly simple. Throttle up the brushless motor, give the plane a soft toss upwards, and you’re flying. The climb rate of the Spitfire at full throttle is surprising. As soon as you pull back on the elevator stick, you’ll realize you’re piloting a plane with brushless power. There is no lack of power with the Thunder Power 730mAh 20C pack onboard. Our flight times were well over 10 minutes and could have elapsed the 15-minute mark if the plane was throttled back throughout the flight. For me, I like speed, so I preferred flying the Spitfire all-out while giving it everything it could handle. While in flight, the plane was stable and responded precisely to radio inputs. The responsiveness of the Spitfire inspired many aerobatic maneuvers, which included loops, rolls, Immelmans, hammerheads, and inverted flight. The control-surface throws weren’t so much that the plane was twitchy or on edge but just enough to complete the aforementioned tricks. Some experienced pilots may prefer more throw for faster rolls rates and for performing aerobatics in smaller spaces. You won’t need to come in “hot” for landings, but the Spitfire prefers touching down under power. If you drain the battery to the ESC’s cutoff during flight, make sure you have ample altitude to gain the necessary speed for landing. This plane appears to be designed for landing in grassy areas, but an occasional dirt or asphalt landing won’t hurt it.

>Stability. Despite having a 25-inch wingspan, the Spitfire is quite stable. You won’t want to fly your plane on gusty days, but a light breeze won’t bother this warbird much.

>Tracking. When using the ailerons for rolls and turns, the plane tracks well. On hammerheads and other rudder-input stunts, the plane wanders a bit.

>Aerobatics. You’ll be surprised by this little plane’s capabilities. You can perform most aerobatics with surprising precision.

>Glide and stall performance. Low-speed flybys are manageable, but you’ll want to land the Spitfire under slight power; if you don’t, the plane might stall.

After flying other micro planes, I’m often left wanting more stability and power. The Spitfire’s stability and power surpasses that of the other micros I’ve flown. I appreciates its ability to fly in a light breeze, and it tracks exceptionally well. The AiRium Spitfire is now my park flyer of choice.

– Ready for flight in minutes

– Perfect size and speed for baseball fields and open parks 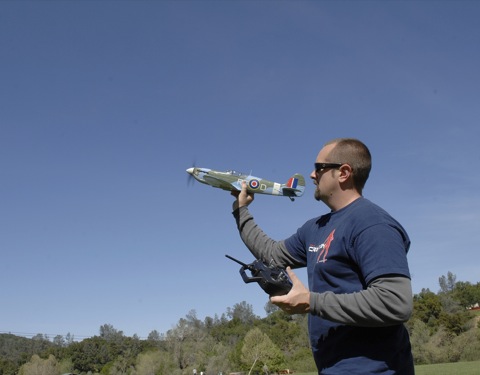 Hand-launching the Spitfire is relatively easy. Power up, give the plane a nice upward toss, and watch it take off nicely. 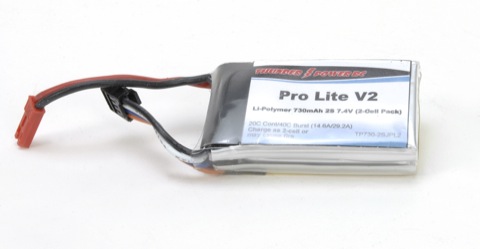 The Thunder Power 730mAh 20C 7.4V with a JTS plug is 3mm wider than the recommended battery dimensions, but it fit well. Flight times were well over 10 minutes, and the power was impressive.

Kyosho includes a handy molded “perch,” which allows you to display the plane on your desktop or workbench. Thanks to it’s pivoting ability, your plane can be positioned in a number of creative flight poses. 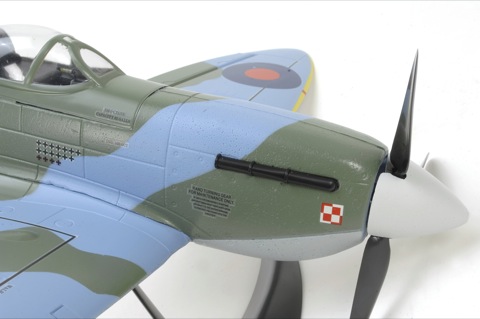 The detail on this small, inexpensive plane is noteworthy. 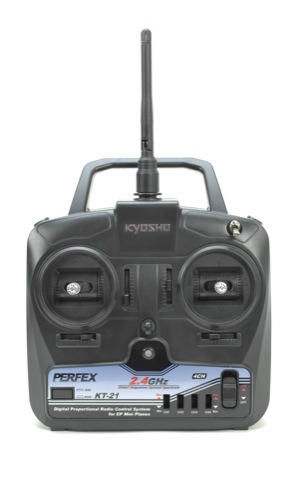 The Perfex KT-21 radio isn’t skimpy by any means; it feels substantial in your hands. All of the trims have been preset at the factory, but before you fly, it’s a good idea to inspect the control surfaces with the power on to make sure that they are set correctly.