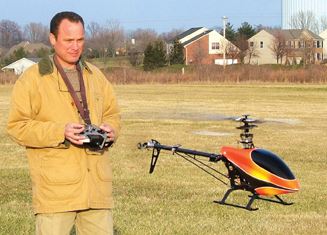 In today’s RC heli world there are more training options than ever before. Many newcomers start out with a micro coaxial bird, move on to a micro tail rotor heli and then gradually move up to larger, higher-performance machines. Others start out with a larger helicopter, working with an instructor to get over the initial learning curve. For these fellows, tough trainers like the Multiplex Funcopter prove to be a good choice. There really is no “right” way.

Here are some general tips for transitioning from basic hovering to forward flight and finally to nose-in hovering. Once you master nose-in hovering, your basic flight skills tool kit is largely complete, and heli flying becomes a lot of fun.

First of all, RC flight sims are priceless training tools that can flatten the learning curve. Crashes are neither cheap nor enjoyable, so time on the sim is time well-spent. That said, I’ve never felt that flight sims could take the place of real-world flying. All the sims I’ve tried have made the heli just a bit more stable than they are in real life. Second, in the sim world, things happen a split second slower than they do at the flying field—just enough to matter. Finally, on the sim there’s no pressure; repairing a crash is as simple as pressing the reset button, rather than requiring a wad of cash and hours in the shop.

Considering all of these factors together, I’ve always been able to do far more advanced flight maneuvers on the sim than I was able (or willing) to do with my treasured helis at the field. But sims are still great for mastering the basics and raising your confidence level. You should alternate time on the sim with training time at the field, always working ahead on the sim before trying each new step with your helicopter.

Transitioning to forward flight is easier if you fly a large circle around yourself; the heli never gets farther away, and if you get rattled you can kick rudder to return to a nose-out hover.

This is certainly a case of “do as I say, not as I do.” I taught myself to fly in my small backyard, which is surrounded by a chain link fence. While this allowed me to do several training sessions each day, my poor old Corona had several encounters with the fence. The ideal training area should be large, flat and unobstructed. With a large open area, you have room to bail out any time you get rattled. When in a confined area, you run out of options far too quickly.

INITIAL FORWARD FLIGHT
My preferred method to start out in forward flight is to stand in the middle of a large area and fly slow circles around myself just like a control-line model. This has some important advantages: The heli is a constant distance away, so you don’t have to worry about it getting too far away or becoming disoriented. Also, you never have to fly back toward yourself. Start with slow circles, flying a comfortable distance away—30 to 100 feet, depending on the size of heli and your own preferences. You should alternate flying clockwise and counter-clockwise so that you never develop a preference. Every minute or so, slow to a hover, make a gentle turn away from yourself and then ease into forward flight in the other direction. As you gain confidence, gradually make the circle larger and increase speed. You’ll get used to your heli’s handling in forward flight without having to worry about distractions like disorientation.

FIGURE-8
Once you get comfortable with basic forward flight, the next stage is to step out-side the circle and begin flying figure-8s. At the start, the figure- 8s should be flattened and arched so that it’s almost like you’re still flying circles around yourself, but with a turn away each half-lap. Start out flying very slowly and increase speed gradually. As you get comfortable with this exercise, you can gradually straighten the 8 until it looks more like the symbol for infinity. Even now, you’re hardly flying toward yourself but rather are flying parallel to the imaginary flightline.

The beauty of a figure-8 training pattern is that all your turns are away from yourself, and any time you get confused you can simply make a 90-degree turn away, and you’re back in a nose-out hover. Besides, cruising back and forth flying figure-8s is just fun! You can really start to enjoy the experience, rather than just stooging around in a hover.

As you get more comfortable with figure-8s, you’ll gradually make the rings rounder, so that you progress from an infinity symbol to two perfect overlapping circles. Once you’re comfortable with this, you’re ready for the last step.

Figure-8s should start out flattened but get gradually rounder as your skills and confidence increase. Keep a little altitude in hand in case you need to bail out to nose-out hover. From here, all you have to do is fly slower and slower until you’re hovering nose-in.

THE NOSE-IN HOVER
All of these exercises have led you up to being comfortable flying toward yourself in forward flight. The advantage of this approach is that in forward flight you don’t have to contend with all three flight axes (pitch, roll and yaw) being reversed: Forward momentum takes care of pitch, and a good heading hold gyro eases the workload on your left hand, so you really only need to think about roll (left/right cyclic) being reversed, and if you’ve flown fixed wing RC or even driven an RC car, you’re already used to that.

Throughout these flying exercises you should be doing constant training on the sim, always working ahead on the next exercise. So, by this point on the sim, you should be completely comfortable in a nose-in hover and even doing gentle pirouettes. The idea is to get your brain (and hands) trained to the notion of unconsciously putting yourself inside the heli regardless of heading.

The last big step starts with flying a nice circular figure-8 pattern. At the center of the 8, you’re momentarily flying nose-in. From here, practice flying these figure-8s slower and slower so that at the center you reach a nose-in hover. Don’t force it; be happy with a second or two of hesitation and then continue slowly around the circuit. Any time you start to get rattled, just kick in tail rotor so that you pivot to a nose-out attitude.

As you progress, gradually increase the length of the nose-in hover. You’ve already gotten used to reversed roll control, so concentrate on controlling the tail. When I was learning, I found yaw control easier if I looked at whatever part of the heli was pointed away from me; so in nose-out flight I focused on the nose, and in nose-in flight I focused on the tail.

Since you’ve already mastered all this on the sim, you’ll find that tail control becomes instinctive and unconscious, and as your hesitations become longer and longer, you’ll find that you’re mastering the reversal of pitch (fore/aft cyclic) control as well.

As with most things worth doing in this world, you can’t expect it to come overnight, and you have to work at it constantly. I did several flights per day during this stage of my training, and the constant focus was a big help.

Once nose-in hovering becomes second nature, flying RC helis gets to be a lot of fun. Even though my small yard doesn’t lend itself to acro, I treat myself to some close-in flying nearly any evening the weather cooperates. These are flying opportunities that would otherwise go wasted, and it never gets old. Good luck!