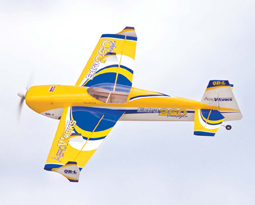 When I first started aerobatic competition, symmetrical maneuvers that combined various elements were of the most complex to perform both precisely and consistently. Let’s take the loop, for example. While it may be fairly straightforward to perform a single loop, try flying a vertical 8, which is an inside loop followed by an outside loop. Place these maneuvers on top of each another, make sure they are the same size, and fly them in different wind conditions. Now, it isn’t so simple! With time, you will take the various maneuvers that we discuss and build upon them. After all, that is the beauty of aerobatics. This month, we’ll examine the reverse Cuban-8 from the top with half rolls. This is maneuver number six from the current Advanced precision aerobatic sequence.

This maneuver starts at a fairly high altitude. You will push to a 45-degree down line to execute a half roll. Then, you will perform a ¾ outside loop to another 45-degree down-line. Again, perform a half roll. Next, fly a ⅝ outside loop to level flight to exit the maneuver at the same altitude at which the maneuver began. You may be thinking that this maneuver appears to be fairly simple. However, like the vertical 8, you will soon realize that it takes a fair amount of practice.

Before we get into our discussion, let’s take a look at your airframe. I will use my E-flite Carbon-Z Yak 54 with a 4S 2640mAh battery as an example aircraft, and you can use my recommended setup as a starting point if you are flying a similar aircraft. Note that all airplanes have different “power-to-weight” ratios and even the same aircraft may have a different flying weight. If you are using a smaller battery, you may have better throttle performance as the airplane is lighter, and vice-versa if you’re using a larger battery.

I love using “flight modes” on all my planes. This basically means that all dual and/or triple rates can be found on one switch. While other features exist (like the fact that separate mixes can be applied on each flight mode, separate trims can be applied to each mode, and so on), I use the term “flight mode” in its most basic form.

Once in the air, let’s check control throws. The airplane should not feel overly sensitive while flying on low rates, but smooth. At altitude, apply full aileron deflection. If the roll rate is too slow to respond while the aileron stick is at maximum deflection, increase the aileron dual rate value. On the contrary, if it is too quick and you can’t keep up with the rate, decrease the dual rate value. Then try different exponential values so that you can make small corrections around neutral stick so the airplane is not overly sensitive. Perform similar tests but on the other control surfaces. On low rates, you should be able to sustain knife-edge, which will determine the amount of rudder deflection that is needed. You should also be able to pull on the elevator stick and not have the airplane tip stall.

It can help to count while flying the various line segments to keep them the same length. It’s also important to fly at a constant speed. Now that you have a brief overview of the general control inputs that are required, let’s explore this maneuver as well as a few key flight tips by breaking this stunt into four steps:

STEP 1. This maneuver contains two symmetrical elements that must be centered on the pilot. Establish upright level flight at a fairly high altitude while travelling parallel to the runway. Then, slowly decrease throttle as the airplane approaches the aerobatic center. Once the aircraft is about 50 feet from the aerobatic center, push, ever so slightly on the elevator to execute ⅛ loop to establish a 45-degree down-line. Fly a brief line segment. Keep in mind that the length of this line will determine the lengths of the next three segments. Then, perform a half roll in the direction of your choice. Next, fly another line, equal in length to the first.

STEP 2. Perform a gentle ¾ outside loop to establish a 45-degree down-line. Apply throttle as needed to keep a constant flight speed. On your first attempt, I recommend that you use about 80% throttle on any segment that involves a climb and adjust the throttle setting accordingly. Remember, the goal is to keep the airplane flying at a constant speed.

STEP 3. Fly a brief line on the 45-degree down-line that is equal to the previous segments. Then, execute a half roll. This should be at the same roll rate as in the first half roll.

STEP 4. Fly another line, the same length as before. When complete, push a ⅝ loop and exit in upright level flight. You have now successfully flown the reverse Cuban-8 from the top with half rolls!

Some situations may arise that need special attention and practice. For example, in a strong wind, the airplane may change heading. Make sure that the heading of the aircraft is exactly where you want it to be and ensure that both loop segments are the same size and are round, as intended. Also, define the 45-degree lines and center both half-rolls on the 45-degree lines. While these are the most common mistakes performed, they can separate a novice pilot from an advanced pilot.

Now that you have learned the fundamentals, take a breath, charge up your airplane, and head out to the flying field. If you have difficulty performing this maneuver, break it down into steps and examine the setup of your aircraft. Make sure that it responds exactly as you would like it to. If the airplane is too sensitive and shows your every move, increase the exponential. Follow the steps that were outlined throughout this column and enjoy all that this fine sport has to offer!

Flight Tip–TRY DIFFERENT EXPONENTIAL VALUES SO THAT YOU CAN MAKE SMALL CORRECTIONS AROUND NEUTRAL STICK SO THE AIRPLANE IS NOT OVERLY SENSITIVE.