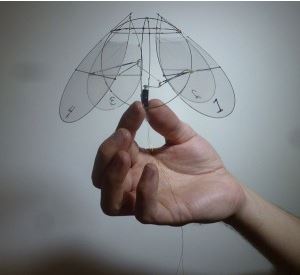 Leif Ristroph, an applied mathematician a NYU, created this unique aircraft, which weighs just 2 grams and is 8 centimeters in diameter. The aircraft’s four wings flap 20 times a second to keep it aloft. Half its weight is the motor, and for now the flying jellyfish is tethered to a power cord. The most intriguing part, though, is how it stays upright while flying, because it doesn’t have any sensors or controls!