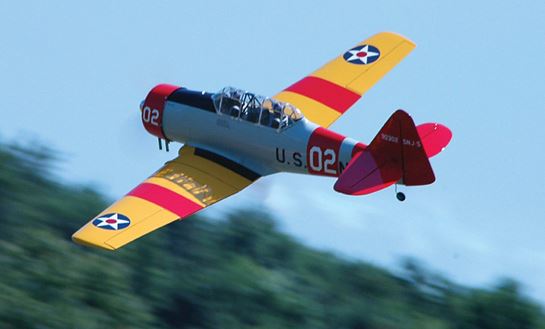 For example, loops must be perfectly round and centered, and precision is the key to achieving the highest score. In scale competition, however, you have to execute a loop just like the full-size aircraft would have performed it. For example, a loop done by an old vintage biplane would be more egg-shaped, and that’s the way a scale flier has to do it!

An interesting twist in scale competition is that before a pilot flies a round, he must tell flight judges how the full-size airplane flew and how he will fly his model in a realistic fashion. So the first thing you have to do to be successful is to find out as much about the full-size aircraft as you possibly can. Very lightly loaded aircraft that were modestly powered might have had a cruise speed of only 75mph because lots of rigging and fixed gear created a lot of drag; old biplanes simply would not do a loop like an Extra 300S!

To fly a simple loop, a vintage aircraft would have to perform a long, steep dive to increase its speed (often doubling its cruise speed), or it simply would not make it over the top of the loop.

Mandatory maneuvers are takeoff, high-speed pass, low-speed pass, traffic pattern and landing. Mechanical options such as retractable landing gear and operating flaps can also be used as maneuvers for up to 10 points each, but many new competitors with simple airplane designs compete only with flight maneuvers. For maneuvers, I like to use the loop, barrel roll, stall turn, 2-turn spin and snap roll. I choose the more difficult ones primarily because it seems few others attempt them as flight options. Plus, it is simply a lot more fun, and isn’t that what flying is all about?

When you perform any maneuver, it’s important to know a lesson I learned many years ago when I took flying lessons in a Cessna 150. My instructor said, “Remember, airspeed is attitude, and power is altitude.” I thought about it, and frankly, it didn’t sink in until he showed me that even at full power, he could pull up the nose about 45 degrees, and the aircraft would stall … hmmm. Then throttling it back, he pointed the nose down, and even at idle, we were going fast. The lesson here is to be very careful, especially with a scale aircraft, because even at full power, it is very easy to pull too much up-elevator and stall, especially shortly after takeoff. This is a pretty classic crash scenario, and you should keep it in mind whenever you fly.

General Flying
Be very gentle on the controls; remember, you are supposed to be carrying passengers! Go to a local airport and watch the full-size planes. You’ll quickly see that they appear to fly slowly and very smoothly. I fly mostly aerobatic planes, and this is great training to hone your skills, even if you have no intention of ever entering a pattern event.

Let’s talk a bit about mixing. Adverse yaw is common. This is the tendency of an aircraft to yaw in a direction that’s opposite to the aileron input. This means that if you wanted to turn left and gave some left aileron, the plane would lower its left wing but yaw (turn) right. The amount of yaw can vary and is sometimes so large that the plane will actually turn right rather than left. This is very common in full-size planes and many scale models as well. It’s not that common in sports models because they are designed to not have this tendency. Here are a couple of fixes.

By adjusting aileron throws to have more up than down movement (known as differential), we can minimize adverse yaw; adjusting them to have a 2:1 up/down ratio is not unusual. To make a good coordinated turn, we can also mix rudder into aileron, so the aileron control is the master and rudder is the slave. I often mix in just a bit of rudder by hand during the maneuvers. Add just enough rudder so your turns look right. Too much mixing can become a problem in other maneuvers, so use just enough to help you out. Practice those turns using rudder!

There are variations on this, but basically, it’s a roll with up-elevator added, kind of like a horizontal spiral, and it’s actually difficult to do well (figure 1). First, pitch the nose up gently. As it passes through 20 degrees, keep the up-elevator in, and add both left aileron and a bit of left rudder. To get most scale planes to perform a large barrel roll slowly, rudder is necessary. As you approach the top of the roll (inverted), release most of the up-elevator but not all, and start feeding it back in as you come around to upright. You want to avoid negative G. Keeping this in mind will help you execute this maneuver properly. 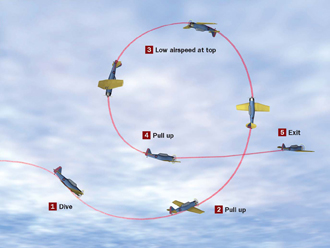 As mentioned previously, older airplanes often required a long, sustained dive to achieve looping speed. And even at that speed, as the full-size plane got to the top of the loop, there would be almost no airspeed left!

So, at cruise, push the nose down, gain speed and then gently pull up (figure 2). How much? Well, just enough to ensure that when you’re at the top of the loop, almost all airspeed is gone; you need to learn how much through experimentation.

Scale flying is not difficult but does require a different approach from pattern or aerobatic flying. You must fly the maneuver well, and it must be done as the full-size aircraft would have flown it. Research pays off big time, and flying and practicing sport aerobatics will help improve your flight skills. You’ll learn something new while becoming a better scale pilot. Work on centering your maneuver in front of the judges, and enjoy yourself. 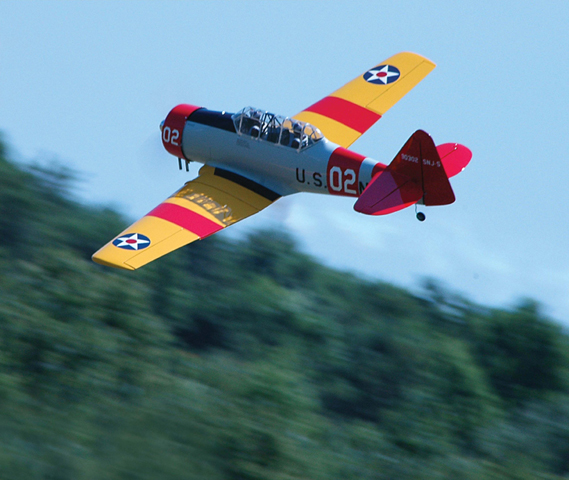