The first 3D maneuver many pilots learn is the “elevator.” During an elevator, the airplane remains fully stalled and drops almost vertically in a flat attitude. Start by pointing the airplane directly into the wind. Cut the throttle and increase upelevator to enter a stall. At the moment the plane stalls, hold in full up-elevator and add a few clicks of throttle to provide enough propwash over the tail to maintain control authority and to keep the fuselage level. Then adjust power to raise or lower the nose. Throughout the descent, rudder is the primary control used to correct left and right deviations, including leveling the wings. Most of the time you’ll have to hold in some right rudder to correct for the left turning tendencies of propwash and P-factor (asymmetric propeller thrust) that occur at high angles of attack. During the descent, you will likely encounter the phenomena of wing rocking. (When both the left and right wings are deeply stalled, they tend not to stall exactly the same.) Consequently, continuous rudder corrections, sometimes backed up by small aileron corrections, will be needed throughout the descent to keep the wings level. Large ailerons inputs should be avoided due to the significant adverse yaw that occurs any time you apply aileron at high angles of attack. If you must make a larger aileron input, you’ll need to coordinate the rudder in the same direction as the aileron to prevent adverse yaw from jeopardizing the maneuver.

Brief Bumps are Key!
Your rudder and aileron corrections must be brief. If you’ve watched car racing on TV, you may have noticed the in-car camera shots of a driver bumping or nudging the steering wheel. That’s because race cars are typically driven on the edge of control, and if the driver over-controls just once, he can send the car spinning out of control. To avoid spinning out, race car drivers make several smaller (bump) corrections rather than one larger correction. Similarly, an airplane teeters on the edge of control during most 3D maneuvers, and thus your rudder and aileron corrections must be kept brief to avoid aggravating the wing-rocking phenomena. 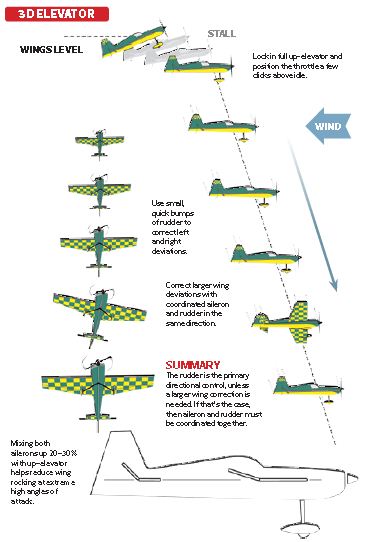 Elevator-Flap Mix An effective technique used to reduce wing rock is to activate the elevator/flap mix so both ailerons raise up approximately 20-30% when you hold in full up-elevator .While you’re at it, you might as well program both ailerons to lower 20-30% with down-elevator to complement future inverted 3D maneuvers.

Elevator Summary
Point the airplane into the wind, cut the power, and smoothly pull full up-elevator. When the plane stalls, add a few clicks of throttle to keep the fuselage level and hold in some right rudder to correct for propwash and P-factor. Correct deviations with brief bumps of rudder and use coordinated aileron and rudder inputs to correct larger wing deviations. Keep your fingers moving, and if the wings start to rock uncontrollably, exit the maneuver by relaxing the elevator and adding power.