This maneuver  takes elements from both the roll and an outside loop. It is known as a turnaround maneuver as once executed, it will change the direction in which the airplane is travelling. During this maneuver, you should orient the aircraft parallel to the runway, flying upright at an altitude of about 600 feet. The altitude will differ depending on the size of the model being flown, but an altitude of 600 feet will suffice for an aircraft that has a 60-inch span. After the heading has been established, the model should perform a 90-degree push to establish a vertical downline, where a brief line segment will be flown. A half-roll is performed during another line segment, equal in length to the first. The aircraft will then execute a 3/4 outside loop and exit the maneuver in upright level flight in the opposite direction in which it started. This maneuver can be divided up into four steps: 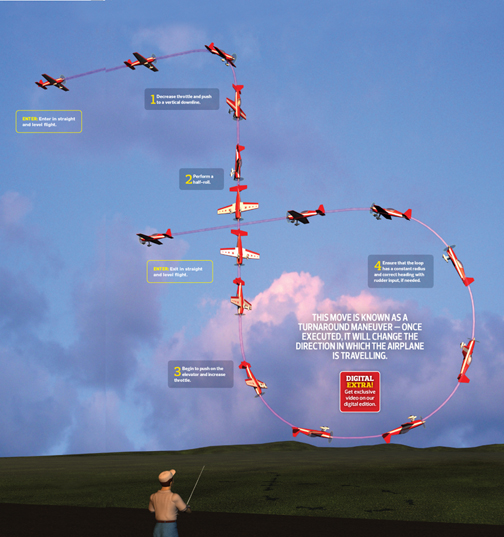 STEP 1: While the aircraft is travelling at a fairly high altitude into the wind and parallel to the runway, decrease the throttle and gently push to a vertical downline and fly a brief line. To ensure that your lines are equal, it often helps to count “1, 2” during each segment.

STEP 2: Next, perform a half-roll at a moderate roll rate and fly another line, equal in length to the first. Again, count out, “1–2.” Note that your count will only work if the speed of the aircraft is constant! Make any necessary rudder corrections to keep the flight path of the airplane parallel to the runway.

STEP 3: At this point, increase throttle as you begin the push for the 3/4 outside loop segment. Throttle input will vary depending on the power-to-weight ratio of the aircraft, but it is safe to say that about 75% throttle should be used as soon as the airplane is inverted and passing the 90-degree segment of the 3/4 loop, which is a total of 270 degrees.

STEP 4: Once complete, the aircraft must be travelling in upright level flight, but in the opposite direction compared to the entry. Throughout the maneuver, various aileron, elevator, and rudder corrections will be required; apply these inputs as needed to keep the airplane properly positioned.

To perform this maneuver with pure excellence will require practice, patience, and the proper aircraft setup. Pilots often have difficulty with line segments not being of the same length and may have loops that are not round or a half-roll that isn’t centered on the downward segment of the maneuver. Also, wind can often become a troubling factor. In short, no matter what wind direction is present, the flight path of the model should always be either parallel to the runway during the entry and throughout the 3/4 loop or perpendicular to the runway during the downline segment with a half roll. If this isn’t done correctly, the airplane can easily be pushed to an undesired heading.

It is important that you don’t become frustrated when trying a new maneuver, as consistency comes with time and practice. Before taking to the skies, think about the new maneuver in detail and know what control inputs will be required. When you’re trying out a new move, it may not look pretty at first, but continue to practice until it looks perfect. And, of course, always remember to have fun!