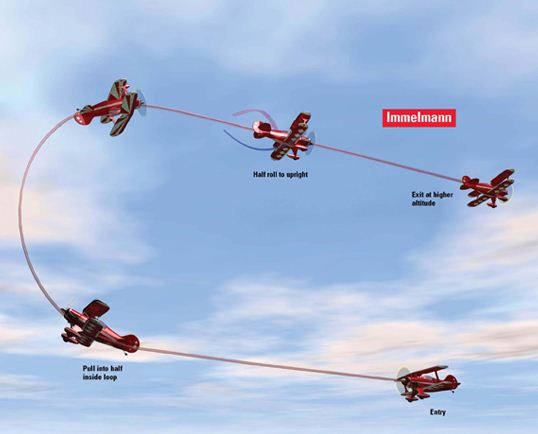 Pilots often use Immelmann turns to change direction quickly. The Immelmann dates back to WW I and was was named for German pilot Max Immelmann. Although some say that his actual combat maneuver was different from today’s aerobatic version, the name has stuck. The combat Immelmann was performed to reengage a target; the aerobatic Immelmann would be more suitable for a retreat from a threat. The combat Immelmann was similar to a hammerhead or a stall turn, but it was completed in the same direction as it was executed. This allowed a plane that was being chased to pull out of the pursuing plane’s range and then come back down behind it for the kill. The modern (or aerobatic) Immelmann is a climbing maneuver.

THE IMMELMANN
To begin the Immelmann, fly your plane flat and level. You should begin this maneuver at full throttle. Pull back on the elevator and begin a half loop; control your tracking with the rudder. When you are inverted directly above the starting point of the loop, execute a half roll so that the plane is flying in the opposite direction and at a higher altitude. Make sure that it is straight and level when it enters and exits the Immelmann. Keep the plane in the same vertical line; don’t deviate to the right or left. It is also important to make a good round half loop; to fly a good round half loop, you have to manage the elevator and throttle throughout the maneuver. Adjust the radius of the loop according to your plane’s abilities. Powerful planes will be able to do larger loops, while other planes may snap out of a loop if you do it too tightly.