The vertical S combines a half-inside loop with a half-outside loop to perform an S-shaped figure. This maneuver is one of many that are also performed by full-scale aircraft, and it is used to climb or descend at a consistent speed. The airplane should be balanced in a manner that when rolled to inverted and with about 70 percent throttle, the airplane will slightly dive. This means that while the airplane is slightly nose-heavy, it will have a more locked-in feel when performing maneuvers like the vertical S. 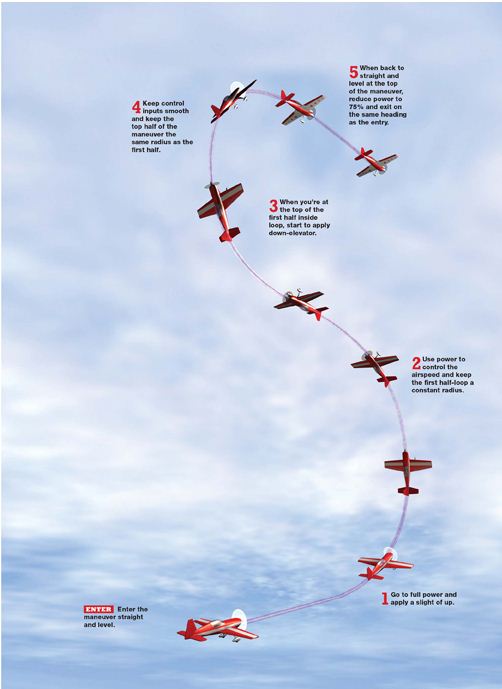 AN OVERVIEW OF THE VERTICAL S
The entry altitude should be at your typical flying height as throughout the course of the maneuver, a fair amount of altitude will be gained. For the 50-inch-span electric example mentioned earlier, an entry altitude of 100 feet is more than sufficient.

When ready, orient your model in a manner that is parallel to the runway and increase throttle to about 90 percent. While this will vary depending on the power to weight ratio of your aircraft, it is applicable to most setups. As the airplane is directly in front of the pilot, the pilot will have to initiate the first loop, which is a half inside loop. Then, when the airplane has completed the half inside loop and is in front of the pilot but inverted and travelling in the opposite direction, a half outside loop must be performed immediately. No line segment should exist between the two loops, and it is important to perform two loops that are the same size. Once complete, the airplane will be traveling in the same direction that it began at, but at a much higher altitude.

STEP 1. Orient your aircraft so that it is travelling parallel to the runway in upright level flight. Make sure that you are on your low rate setting (if using dual or triple rates) and increase the power to about 90 percent. Ensure that the wings of the aircraft are perfectly level and if the airplane is not parallel to the runway, make any necessary rudder and/or aileron inputs to correct the heading. This will greatly decrease your workload as if the airplane is not parallel to the runway and only elevator input is applied for the loop, the loop will not track properly from the start and will need more complex inputs to correct for this error.

STEP 2. As the airplane is directly in front of you, pull back, ever so slightly, on the elevator control to initiate the half inside loop. The size of this loop will determine the size of the outside loop as both portions of the maneuver must be equal. Do not make an extremely large inside loop if your airplane is not over-powered as you may run out of speed on the second half of the maneuver. Use throttle, as needed, to maintain a constant flight speed.

STEP 3. As soon as the first loop is complete, the airplane should be directly in front of you but at a higher altitude. As soon as the airplane is inverted, the outside loop should be performed by applying down-elevator instead of up. Cater the elevator input to the shape of the figure. It is important that you perform all inputs in a smooth manner so that the aerobatic figure will be smooth and continuous. Again, no line segment must be visible between the half loops.

STEP 4. Once your aircraft establishes upright level flight, you have completed the vertical S. Now, decrease throttle to about 75 percent and prepare to give this maneuver another try!

While this may appear to be a fairly simple maneuver, it may take some time to fully master it. For example, the airplane should not drift with the wind throughout the maneuver, and since this is a fairly large stunt, it may. You must concentrate on heading. If you started this maneuver 50 feet away from yourself on the edge of the runway, it should be at that same distance but at a much higher altitude once complete. If a strong cross-wind exists, you may have to lean the airplane into the wind so that the flight path remains constant and parallel to the runway. To do this, rudder corrections will need to be made as well as small aileron inputs to keep the airplane from drifting with the wind. Now, focus on doing all of this while maintaining a perfectly executed vertical S! As you can see, this may be quite tedious!

In closing, you have now learned how to execute the vertical S. Aside from covering the preferred aerobatic setup, we have also discussed the control inputs needed as well as a few tips to ensure success in undesired wind conditions. If you need further assistance, consult the advice from another fellow experienced modeler or write to us. Until next time, safe flying and always remember to have fun!