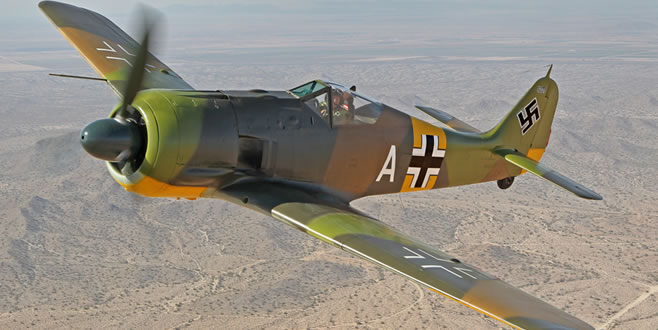 In this video you see the Flying Heritage Collection’s (FHC) Fw 190A-5 Focke-Wulf, Based  in Everett, Washington. On July 19, 1943 the FHC FW 190 was being flown by Paul Ratz, flight leader, and his wingmen were on a “free hunt” mission over the “corridor of death”. The details Luftwaffe loss report indicated that the 2 pilots encountered heavy anti-aircraft fire from a train they targeted, and Paul Ratz  reported engine trouble and needed to make an emergency landing. The wingman reported seeing the plane for the last time just to the west of Volkhov.  The pilot was listed as missing in action, and in fact, spent some 6 or 7 years as a POW in Russia. The aircraft laid virtually untouched in a swampy forest for over 45 years. The pilot’s helmet was placed neatly on the pilot seat when it was discovered around 1989. It appeared that Paul Ratz piloted his powerless Fw 190 and made a perfect belly landing in the swampy area forested with very small saplings. The wings leading edge had showed evidence of having smashed the saplings that later grew back and concealed the aircraft. It was discovered that the aircraft was not downed by anti-aircraft fire; there was no damage from the enemy fire. The engine had, in fact, overheated and most likely seized up.

The Flying Heritage Collection  purchased the aircraft in 1999, and it was imported to the US in September of 2008. In April 2011, this plane became the 1st Fw 190 to take to the skies since shortly after WW II. For the complete story be sure to check out our sister publication Flight Journal’s WWII Aces, collector’s edition magazine.