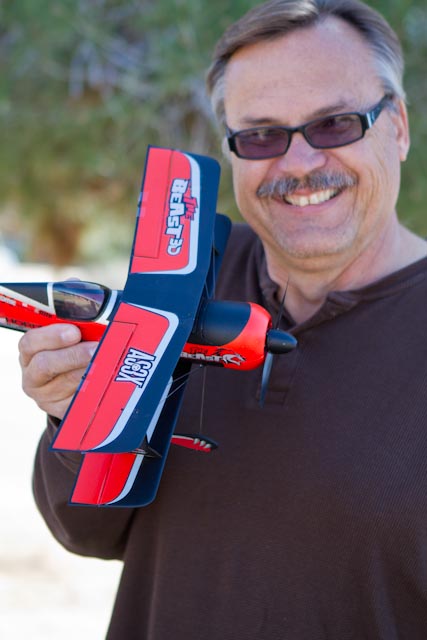 My first experience with the AS3X was with the UMX Beast 3D BNF  setup.  I had an experienced pilot fly it the first time for the photos; he also flew the original UMX Beast without AS3X. His first remark was “WOW! I want this plane!” and he continued with similar remarks even after landing. By the time I was able to fly it, the wind had started to kick up a little and I was very nervous about banging up this cool little biplane.  One of the other pilots said that this system is supposed to make an average pilot look good, so I would be able to prove that point. He also went on to say that in a Horizon video Quique Somenzini states that he doesn’t worry about the wind anymore when flying his Beast.

Now I am an average pilot, but Quique could fly a rock in a hurricane and keep it tracking straight. I went ahead and threw in a new battery and then got the UMX Beast in the air. It was amazing: the AS3X made my flying look much better than it was and I did not have to worry about the wind because the plane corrected itself during the entire flight. This technology does make a small plane feel like a much larger plane.  It flies smooth and feels like it is on rails. As I flew the plane toward me, I could see all the tiny little corrections the AS3X system was making to keep the Beast flying smooth and level. What is truly amazing about the AS3X is while it is making all of these corrections you, the pilot, do not feel a thing; the plane just keeps its line. I just felt like I was flying a large, smooth aircraft.

No matter what attitude I put the Beast in, it stayed on track.  I rolled it up into a knife-edge and it stabilized for that flight path so that all I needed to worry about was rudder input, it almost felt like someone had already programed in rudder to elevator and rudder to aileron mix. Holding a knife-edge the full length of the runway was a piece of cake. I have to say that I was extremely impressed with the flying performance of this tiny airplane. Stay tuned for a full review of the AS3X system (and the improved Beast!).