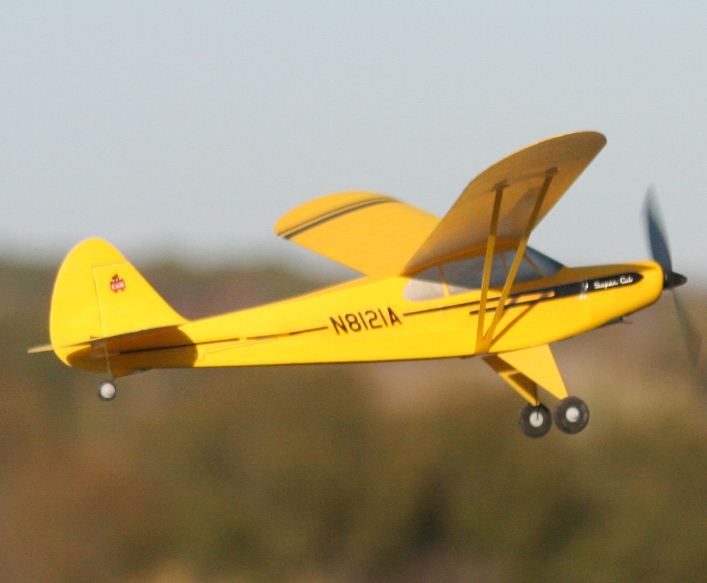 From the time the PA-18 Super Cub was introduced in 1949, it became iconic right along with the J-3. Hobbyzone’s new micro version of the Super Cub is a complete factory finished all-foam, 3-channel RTF right out of the box and includes a Tactic four-channel 2.4 GHz radio, five AA batteries, and LiPo battery.  The cool design does not stop here, but also includes a built-in battery charger for the 3.7v LiPo that is on the back of the transmitter.  Give yourself about 20 minutes between charges and you get the opportunity to fly for a good ten minutes.

Honestly, if a plane is advertised as a Cub it should look like one and there is no doubt the Micro Super Cub is an excellent rendition.  The paint is Cub yellow, the decals include the Super Cub script, November 8121 Alpha is boldly shown and that cute little Cub is right where it belongs on the vertical stabilizer.  Struts are also provided, but not necessary for flight.

One of the really great elements of the Flyzone Micro Super Cub is its overall weight.  At about one ounce, it has minimal mass and therefore is perfect for beginning flyers that might have a crash or two.  Just in case though, parts are easily obtainable for every component right down to the decals. It might seem the little Super Cub will not handle the wind, but it does pretty well in calm winds and is an excellent candidate for your first indoor or outdoor flyer at about $79.

Unique features
The Micro Super Cub is molded foam, with a flat foam tail and stabilizer.  The wings have molded ribs for authenticity and use a fairly large dihedral to improve stability.  Struts are plastic and use a small double–stick piece of tape to make the attachment both secure and to make sure the struts are also removable.  A fine line exists between the two strut design points so it is really a user choice if you want to include these when you fly.  Lightweight steel linkages are adjustable with slight bending of included Z bends.

AA Batteries are included and will both operate the transmitter and provide power to charge the included 3.7v LiPo.  An LED is provided to show the battery is under a charge and the transmitter will not operate if a battery is charging.  The recessed charging port has a cover door that when opened exposes the charger.  This is a very user friendly design with both male and female plugs that cannot get miss–aligned.  Extra batteries are about $9 so get a couple and have them charged and ready to fly.

Don’t overlook the fact that this is a tail dragger.  Normally, these can be difficult to learn to control on the ground, but the Micro Super Cub is very easy to taxi and tracks very well on take-off.  The tail wheel is not steerable.  You can use a take-off roll or hand-launch this classic.

Once the battery is charged it is inserted into a recess under the cowl and retained with a small strip of Velcro.  The wires that run from the male plug to the ESC onboard a brick type receiver with elevator and rudder actuators are light weight, so it requires some degree of dexterity to hold the battery and plane and at the same time attach the battery.  I really like from a beginners stand point that once the battery is inserted and secured, the plane is balanced.  No need to worry about being out of balance.

The Tactic TTX402 4-channel 2.4 GHz. radio is high performance and is not lacking in necessary extras.  The radio uses digital trims, LED lights for the charger and operation plus a low battery alarm.  ESC arming is slightly different in that with the throttle fully up the prop will rotate safely and slowly a couple of turns and once the throttle is positioned at the lowest point the prop will turn a couple more times.  So not only do you get an audible beep you also get a visual that the ESC is arming.

Conclusion
This is a true ARF that gets just about anyone into the air quickly.  I have flown for 40 years, but really like to fly this Super Cub.  The charging system is pretty much fool-proof and those ten minute flights are no exaggeration.  Flyzone has something here that would be a great first time plane, but much, much more than a toy.  The Micro Super Cub is portable, quick charging and durable.  Go get yourself a Cub.  You will not regret your choice.

IN THE AIR
About 20 minutes is all you need to get the battery charged so this can be done on the way to the flying field, park or your front yard.  Pick a flying area that gives you some room, but no doubt about the fact we have an AMA park flyer with the Micro Super Cub.

The little Cub is a blast to fly.  It will allow you to experience a tail dragger take-off from a hard surface or easily launch by hand.  Take off roll is really in inches.  Once in the air, one quickly begins to recognize the quality of the design and manufacturing.  As an example, throttle inputs pull the Super Cub forward, not up or down, but straight ahead.  Trims are effective, but the out of the box setup was almost perfect.

Flight times do require some wind monitoring, but a slight wind does not keep you grounded.  Turns are quick and the elevator is responsive.  The Cub will turn on a dime, but it does not stall.  The dihedral on the wing is steep enough to keep the wing tips from stalling.  Notwithstanding is the one ounce weight.  Not sure what a one ounce plane looks like stalling, but it has to be pretty much imperceptible.  I know I could not get the Micro Super Cub to stall.

Some aerobatics are possible but most are relegated to loops.  In fact, you can hold the elevator back and do loops non-stop for as long as you like.  The rudder is not capable of overcoming the dihedral and rolling the plane over.  Even if you did get the Cub over, it would not stay with the dihedral.

Getting it to the ground is fun as the glide slope is excellent.  It will roll-out upon landing on a hard surface, but it just safely stops in the grass.  No damage to anything.  It is hard to have one ounce create much in the way of momentum to cause any damage no matter what you land on or hit for that matter.
I would have no problem taking the Micro Super Cub to an indoor facility even if I had never flown before since it is controllable, slow in the air, turns easily and tracks very straight through all the throttle inputs.  It is not a plane that is going to jump up and disappoint a new pilot.

Control throws are set at the factory, but you do have options.  To increase the control surface movement you can move the linkage from the outermost control horn attachment point to the innermost point.  You also can center your trims by gripping the linkages firmly with two sets of needle-nose pliers and either expand the Z-bend or contract the bend to center the elevator or rudder.   Be careful as the elevator and rudder hinges are molded into the foam.  One well done design element too is the fact the battery is mounted under the cowling and really as long as the battery is in this recess the CG will be correct.

General Flight Performance
>Stability – The Flyzone Micro Super Cub is a joy to fly and it goes where you tell it to go.  It is stable in turns, landings and after a hand launch.  Throughout the flight envelope this little jewel is just plain fun to fly.

>Tracking – The dihedral does a lot to keep the Cub true.  Everything is symmetrical and the geared prop and motor do a wonderful job of pulling the Cub through the air.

>Aerobatics – Just loops, but all of them you can stand.

>Glide and stall performance – The glide slope is very shallow as it really should be.  The weight though is coupled with a great design to make sure a new pilot just has to back off the throttle and let go of the sticks and they will have a safe path to the ground. Stalls are a non issue.

Pilot Debriefing
The more I fly the Flyzone Micro Super Cub the more I hate to leave the house without it.  It loves to draw a crowd, show-off some loops and then make those slow fly-bys that remind you of the history and repeated versions of our beloved Super Cub.  It has to be mentioned again that this is a complete package.  You need absolutely nothing to get started in RC flying.  You get the RTF plane, transmitter, built-in LiPo charger, LiPo battery and transmitter batteries.  This is a steal at $79.