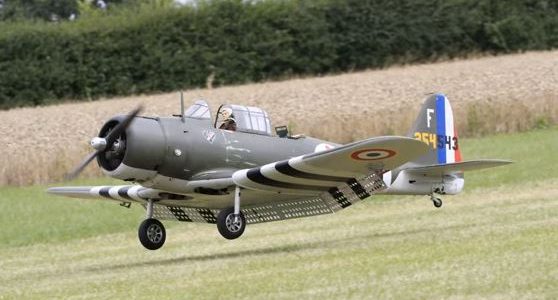 This SBD Dauntless flown by Uli Richter sports an unusual scheme: that of the WW II French Armee de l’Air. In 1944, after the German invasion of France, the Free French Air Force (government in exile) received about 80 SBD-5s and A-24Bs from the United States in 1944. This 44-pound model bears the scheme of the most combat-experienced of the Banshee units, the GC 1/18 Vendee, which flew A-24Bs in support of Allied forces. Powered by a Moki 250cc gas engine, this 136-inch-span model can really put on some speed! Thanks to Pete and Dean Coxon for taking this video at the Willis Warbirds event at Fullers Hill Farm in Cambridgeshire, the UK.