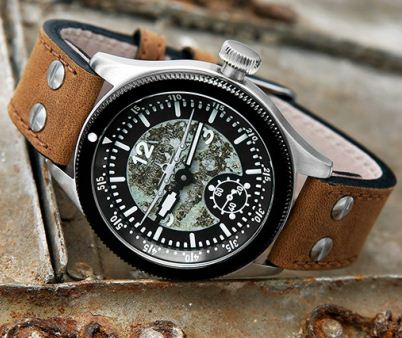 With a dial that’s made out of metal from the last known Fock-Wulf 200 Condor, this aviator’s watch is literally a piece of history. Here’s how the aircraft was found nearly four decades after the war.

Fock-Wulf FW 200 Condor (works number 0063, identification F8+BR) was discovered by Norwegian scientists thirty years ago in 1981 and was lifted from the grounds of the Trondheim fjord in a dramatic salvage action in May 1999. The airplane is since 2003 being restored at Airbus in Bremen, Lufthansa Technik in Hamburg and Rolls-Royce in Oberursel near Frankfurt/. For the Deutsche Technikmuseum in Berlin.

Named after the largest bird of prey of the Andes, the Focke-Wulf FW 200 Condor was one of the most modern commercial aircraft of the Thirties. Powered by four powerful BMW nine cylinder Bamo-323 R2 radial engines with an output of 1000 hp each the Condor was the first airplane to cover the distance from Berlin to New York non stop.

On 10 August 1938 the Lufthansa FW 200 V1 „Condor“ with the marking D-ACON under the command of flight captain Dipl.-Ing. Alfred Henke and with captain Rudolf von Moreau (second pilot), Paul Dierberg (operator) and Walter Kober (radio operator) as the first civil aircraft flew the distance of 6371,302 km from Berlin-Staaken to the Floyd Bennett Field in New York in 24.56,12 hours, which meant an average speed of 255,499 km/h. On the return flight from New York to Berlin-Tempelhof the airplane covered a distance of 6392 km in 19.55 hours and an average speed of 321 km/h. Both flights were approved as official records in the second class (records with crew) by the FAI.

On 28 November 1938 D-ACON started with the identical crew and additionally with operator Georg Kohne (from Focke-Wulf) and Konsul Heinz Junge (Director of Focke-Wulf-Flugzeugbau GmbH Berlin) from Berlin-Tempelhof for an other record flight with three refuelling stops in Basra (Iraq), Karatschi (Pakistan) und Hanoi (Vietnam) reaching Tokio on 30 November 1938. During this flight the Condor covered 13.844 km in 46 hour and 18 minutes and an average speed of 192 km/h (including the times for refuelling in Basra, Karachi und Hanoi). On the way back D-ACON had to be ditched in the Cavite bay at Manila due to a broken fuel line on 6 December 1938.

After the outbreak of WW2 the FW 200 were campaigned as long-range reconnaissance airplanes by the German Luftwaffe mostly over the Atlantic ocean to receive information about ship convoys.
F8+BR served in the Luftwaffe for two years and has a special history of her own. After missions as long-range reconnaissance aircraft in Fance and air supply in Northern Africa she was transferred to Norway in February 1942. The first mission was carried out from the airbase in Værnes . Then, on 22 February 1942 at 8.09 a.m., the plane started for a reconnaissance flight leading to the Eastern coast of Iceland. No remarkable incidents were noted. But after a flight time of 584 minutes at 5.53 p.m the aircraft has to be ditched in short distance from the base near Hommelvik on the waters of the fjord. During the landing procedure the landing gears have been deployed. When, in 400 feet above ground, the operator wants to activate the air brakes, only the ones on the left side react – and these unfortunately to full extent. The two pilots succeed in pulling out of the dive but a ditch is unavoidable. The base, in four miles distance, is out of reach. Pilot Werner Thieme lowers the rear end of the aircraft very smoothly, then the rest of the plane with the landing gear. Thanks to a an aeronautical masterstroke the aircraft remains largely undamaged.

The crew leaves the aircraft via the rear door and enters, very similar to an emergency practice, the dinghy carried aboard. After less than six minutes the aircraft sinks nearly perpendicular into the waters of the fjord. The crew is, except for minor signs of hyperthermia, unharmed and is being rescued by a boat of the coast guard. Investigations unfold that an irregular function of the landing brakes of the FW 200 have been recorded quite often. During the salvage of F8+BR the engaged landing brakes on the left side could still be seen.

The related data of the crew are based on the record that still remains property of Werner Thieme.

Joint missions of the crew
The crew that was saved from F8+BR was formed in November 1941 at the Ausbildungsgruppe IV./K.G. 40 in Lechfeld. After the final instruction the crew started for two flight from Bordeaux. After being relocated to the 7th squadron in Norway one further flight took place from Trondheim before the dramatic incident on 22 February 1942. That flight was to be the thirteenth of Lt. Thieme.
Only five days later, on 27 February 1942, the crew started for a new mission.
Werner Thieme is the only crew member still alive. He lives with his wife near Koblenz (GER) and was interviewed by Bavarian Crono.