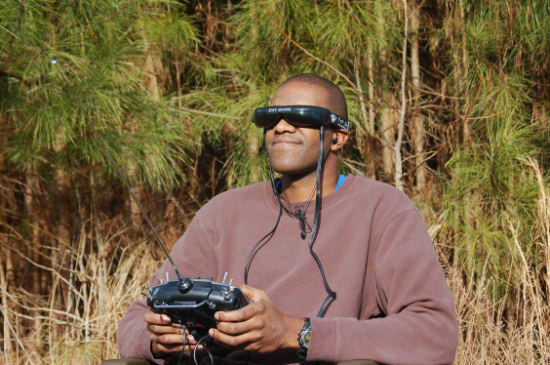 I hope you enjoyed a FPV bird’s-eye view on your latest trip to the airfield.  My last article (“A Plane With a View,” Model Airplane News, February 2010) guided you through building a basic FPV (First Person View) system.  Now that you’ve had some time to get acquainted with your equipment, you may be ready to explore the world of upgrades.  There are many improvements available on the market, but considering each increases the complexity and price of your system, I’ll introduce just a few in this article.  This month, I’ve added four items to my system: Fatshark RCV-922AE (Aviation Edition) goggles, TrackR2 Head tracker, BV-AM5 video splitter and a JXD990 portable video recorder.

Using goggles for FPV offers many advantages—portability, easy to operate and provide the ultimate immersion experience. Although there are many to choose from, I went with the Fatshark 922AE. They are considered one of the top-of-the-line models and sport unique features such as the largest FOV (field of view) of any commercially available headset, built-in 4 channel 2.4 GHz receiver, VGA video glasses with adjustable IPD (inter-pupillary distance), plus are designed and manufactured specifically for FPV RC use.  A 5.8 GHz version will be available in the near future for approximately the same price of $375.

Setting up the 922AE is very easy, but since I’m using a 900MHz video system, I did not use the imbedded 2.4GHz receiver. This is not a problem because the goggles include convenient RCA AV IN and OUT ports. I connected the video and audio cables from the receiver to the AV IN port of the goggles. Next, I selected position 4 on the mode switch. This turns off the 2.4GHz receiver and video can now be fed to the LCD via the AV cables.  Since I’m not using the 2.4GHz receiver, I have to use a video splitter to record flights. I have one feed to the goggles and the other to the recorder; we’ll talk more about that a little later.

Looking through the goggles is equivalent to viewing an 80-inch screen from seven feet away. The color is vibrant and the two LCD VGA 640×480 resolution displays are crystal clear. A low power indicator will warn you when your headset battery is getting low, giving you plenty of time to return to base safely.  Typically, the battery will last for approximately one and a half hrs in wireless mode and three hrs in direct connect mode (receiver off).

Most goggles have a problem with letting in ambient outside light that glares out the picture. The Fatshark’s foam cover keeps light out, yet is still comfortable to wear.  Another convenient feature is the adjustable lenses that can move 3.75mm left or right for better alignment with the eyes. There are also myopic inserts available for those who wear corrective lenses.

With its ease of use and unmatched durability, the Fatshark RCV-922AE is the perfect choice for your next FPV upgrade.

A head tracker is a device that converts head movements into servo movement.  It is placed somewhere on the head and simply plugs into the trainer port of your transmitter.  They detect the head motion (using accelerometers or magnetic field sensors) and send a PPM signal to the transmitter; this in turn, controls the camera pan/tilt servos.

I chose to use the TrackR2, manufactured by AeroPixRC and distributed by HobbyWireless.com.  When the TrackR2 is coupled with the Fatshark goggles, they bring a new level of realism to FPV.

Setting up and programming the TrackR2 is a simple process involving Morse Code-like beeps (similar to that used by many electronic speed controllers).  The manual clearly explains this procedure. The TrackR2 can be powered via a separate battery (8.0V-20V) or through the trainer port on the transmitter, which at the same time can be used to power the Fatshark goggles. I powered mine through the Futaba 9C trainer port; it’s convenient and doesn’t require any extra batteries or long wires.

The TrackR2 is designed to be mounted to the right side of the wearer’s head.  A plastic mounting bracket is supplied, which fits into a pocket in the RCV-922AE headset strap.

When powering up, the TrackR2 will spend a few seconds calibrating itself.  During this time, it’s very important not to move the device (doing so will cause a drift).  Once calibrated, mount the TrackR2 on your video goggles or baseball hat. Next, look in the direction you wish to be “neutral” and briefly press one of the zero buttons. A short beep indicates that the zero position has been redefined; now you are ready to fly.

A nice feature I really like is the Zero Click. During normal use, the TrackR2 will “click” at the zero point of the pan and tilt axis. When there is no visual indication of the front of the plane, this is a great cue to know when looking straight ahead.

The TrackR2 may be used in a student-trainer configuration as well. This mode allows a student to fly FPV with head tracking while the instructor monitors the flight by watching the plane.  In the event that the student gets into any kind of trouble, the instructor re-takes control.

I use a Futaba 9C that is configured for head-tracking using the trainer menu.  I had to ensure the pan and tilt channels (5 and 6), configured in the TrackR2 programming menu as well, were enabled in the Futaba trainer menu.  The other functions in that menu also needed to be disabled.  In order to use the trainer functions, the trainer switch (usually a momentary switch), must be activated.  I used a rubber band to keep the switch active while flying.

In my last article, I was using my laptop for both viewing and recording the flights.  In an effort to keep the items that I have to bring to the field low, I’ve decided to use a smaller recorder.  I needed one that has a long battery life, large hard drive, both AV IN and OUT ports, records in high resolution (720×480 minimum), can record and be viewed at the same time and is portable. The JXD990 fits the bill perfectly. The JXD990 has a two-hour battery life, 8GB internal hard drive (can be doubled with an 8GB Micro SD card), 720×480 resolution, a 4.3-inch video screen and only weighs 150g.  Since it can record and be viewed at the same time, I use it as a backup view screen if the primary device (goggles) fails during fl
ight.

Setting up this little device is surprisingly simple.  Turn it on and plug one end of the included AV cable into the AV IN port on the JXD and the other directly into the goggles (AV OUT) or the video splitter.  Select TV IN on the main menu, check to make sure you are seeing what the camera is, and then hit record.  Once the flight is complete, stop the recording by pressing the record button again.  The video will automatically be saved as a MP4 file that can be played back on the JXD, a TV or downloaded to a computer via the included USB cable.

As I mentioned earlier, a video splitter can be used in between devices.  I chose to use this method because I have several devices that I’d like video displayed on.  I send the video from the receiver to the goggles, recorder, spectator goggles, and a laptop (for live video broadcasting over the internet).  The BV-AM5 video splitter/amplifier, manufactured by Boss Audio Systems and distributed through Hobby Wireless, does a wonderful job of sending a crystal clear video signal to all of my devices.  When a video signal is split and sent to more than one destination, there is a noticeable loss of video brightness and contrast.  This video amplifier can compensate for this loss to each individual device.  Up to four video devices can be connected to the amplifier from a single video source.

The BV-AM5 uses a 12V power supply in order to boost the signal, I use a 3S 1500mAh LiPo that provides hours of power.

These upgrades bring an already impressive system to the next level.  The Fatshark RCV-922AE goggles worked flawlessly and made my FPV experience unforgettable.  The addition of the TrackR2 head tracker not only frees up the pilot’s hands for flying, but also completes the in-the-cockpit sensation, enabling the pilot to scan the horizon intuitively.

The JXD990 recorder and BV-AM5 video amplifier add versatility and depth to the ground station at a reasonable cost.  Now a full immersion experience is not only possible, but affordable too!

Look for my next installment of “Geeking Out Your FPV” when I will introduce an On Screen Display (OSD), 900MHz 8 dBi Flat Patch Antenna and a Long Range UHF Radio System.  Until then, go out and enjoy the cockpit view from your radio controlled airplane! 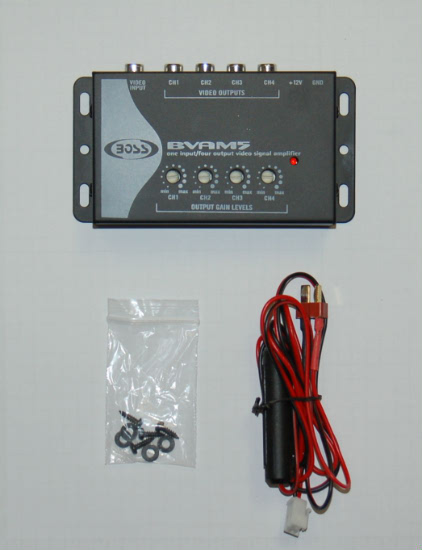 The BV-AM5 video splitter/amplifier, manufactured by Boss Audio Systems provided crystal clear video feeds to all of my external devices. The JXD990 comes with everything needed for video recording, plus a cleaning cloth and leather pouch. 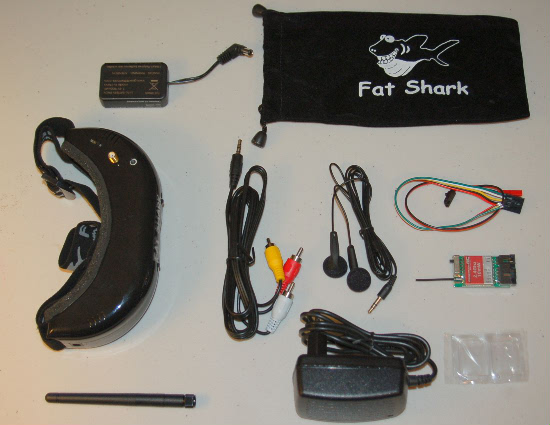 The Fatshark RCV-922AE goggles include a multitude of accessories. 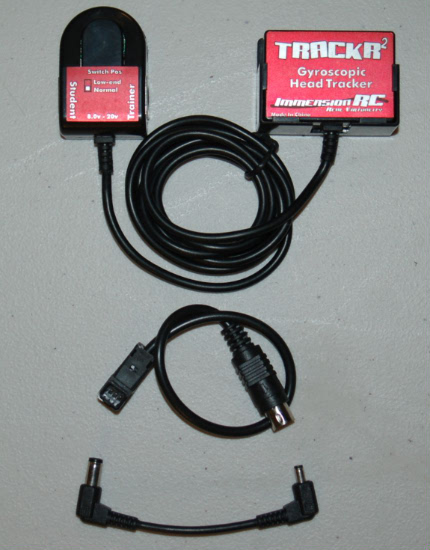 The TrackR2 by AeroPixRC is simple to use and work great. 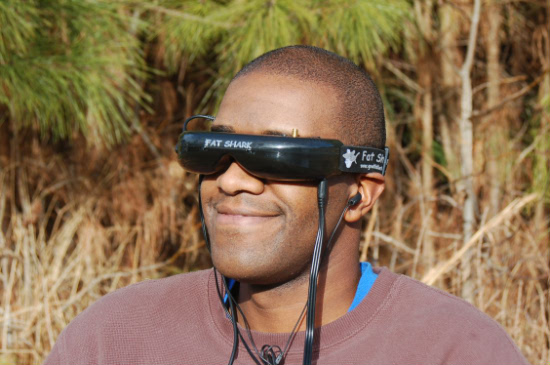 The Fatshark RCV-922AE is fantastic and comfortable to wear as well.