Here in the US quadrocopters like the AR.Drone and Datron Scout are the ones we see in the news all the time but a Dutch unmanned rotorcraft system manufacturer called Geocopter has proven that there’s still life in the traditional helicopter design. The company delivered its first light unmanned helicopter called the GC-201. This bird is designed and built just like a normal helicopter, the GC-201 features a twin gas turbine engine propulsion system, lightweight carbon fiber fuselage and full automatic takeoff with mission and landing capabilities.
The GC-201 has an operational ceiling of 6,500 ft. and a cruising speed of 46 mph. The maximum takeoff weight is 198 lb. the GC-201 has the ability to carry a sensor payload of up to 66 lb for flights lasting up to 2.5 hours. The GC-201 has plug and play sensors that include gimbaled video, thermal infrared and still camera, small and medium format digital cameras, airborne lidar scanner, passive microwave radiometer, multispectral camera and Mini-SAR system.
The ability to easily swap between sensor payloads makes the GC-201 suitable for a range of applications such as real-time aerial support to emergency services, search and rescue operations, environmental and traffic monitoring, mapping, and, of course, security and defense. Earlier this year the GC-201 received official flight approval from the Civil Aviation Authority of the Netherlands for operation in civil airspace
The GC-201 can operate either fully automatically or semi-automatically, and it is easy to transition between the two modes. In fully automatic mode, the aircraft will navigate using waypoints, while semi-automatic mode allows a pilot to take the joystick on the included pilot station.
The GC-201 made an appearance at the 2011 Paris Air Show – although not taking to the skies – the first GC-201 off the production line will go to Geocopter’s launching customer (and development partner), the Netherland’s National Aerospace Laboratory (NLR). NLR is a not-for-profit organization for applied aerospace research and development in the Netherlands. 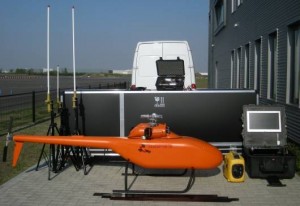