RC modelers all love great movies that feature impressive aircraft  If you’ve ever seen the 2010 action adventure movie “The Expendables”, then you will be familiar with the aircraft used by the team for their missions. This impressive giant scale RC version of the Grumman HU-16 Albatross is painted like the movie airplane and is an amphibious flying boat powered by twin Zenoah G-62 gas engines turning 3-blade scale Beila propellers.

Built by John Greenfield, a member of the Ghost Squadron Show Team, the impressive Albatross began when John found a fiberglass fuselage and other parts that were said to have been produced in the 1970’s or 80s for a motion picture job. He the built up traditional wing and tail surfaces for the fuselage and then started work on the real challenge of the project–the retractable landing gear. After trying several pneumatic setups which all failed to work properly, he eventually developed a system using hydraulics which operates in a very scale fashion. In all, it took a year to build the model Albatross and another year to develop and fabricate the retractable landing gear. The completed flying boat weighs in at an impressive 92.5 pounds and has a wing span of of 189 inches. 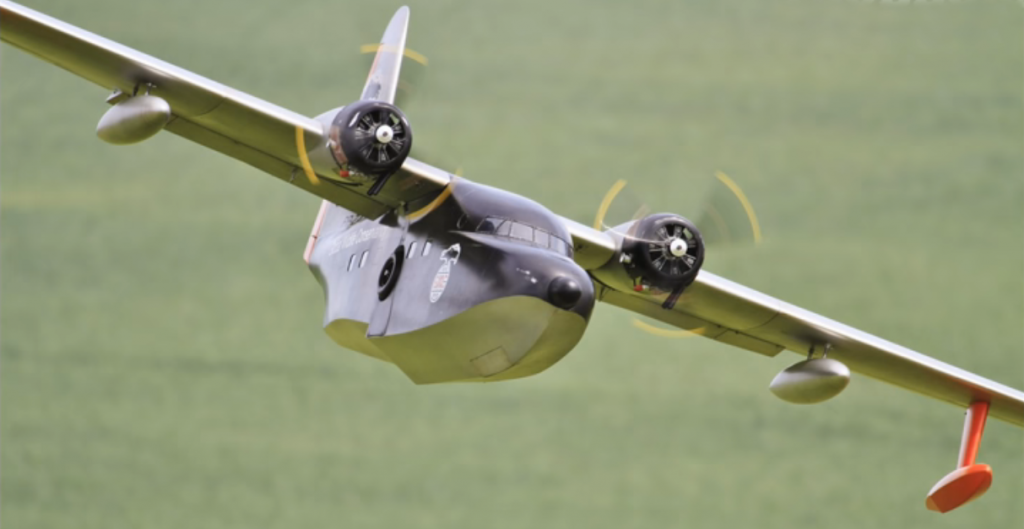 The full size Grumman HU-16 Albatross is a large twin–radial engine amphibious flying boat that was used by the USAF, the U.S. Navy and the U.S. Coast Guard, primarily as a search and rescue aircraft.