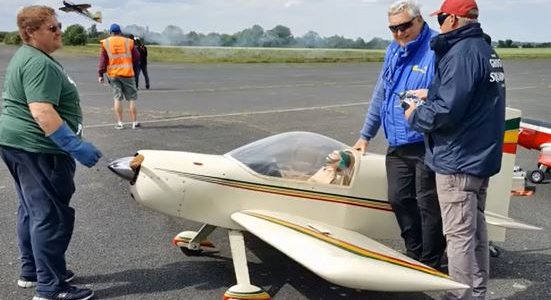 How often do you see an 88-pound Bede 8 model airplane at the field? (How about never!) This unusual RC airplane was scratch-built by the late Doug Rigby and is now owned and flown by Paul Needham. The fiberglass plane has built-up wings finished in fiberglass cloth and is powered by a DLE 222cc flat four-cylinder gas engine spinning a 34×12 propeller. Thanks to the father and son team of Pete and Dean Coxon, known as “Tbobborap1” on YouTube, for this terrific video they took at the Large Model Association RC airplane airshow at RAF Cosford in the United Kingdom.
The original Bede BD-8 was an aerobatics aircraft developed in the United States in the mid-1970s. It was a low-wing, single-seat monoplane of conventional configuration, albeit very short-coupled, and of all-metal construction. The single prototype was under construction by Jim Bede when his company, Bede Aircraft, faced bankruptcy in 1977. The incomplete BD-8 was purchased by Mike Huffman, who completed its construction in 1980. It first flew on May 14, 1980.